Erasing all traces of evidence that implicates Umbrella Corporation to the T-Virus.

Killing anyone who gets in his way.

Kill all witnesses and survivors of the T-Virus-ravaged Raccoon City (failed).

He is a retired US Army Major who soon became hugely affilated with the Umbrella Corporation as a high-ranking official.

The character was portrayed by Thomas Kretschmann, who also played Professor Zündapp in Disney/Pixar's Cars 2, Wolfgang Von Strucker in the Marvel Cinematic Universe, Hermann Fegelein in Downfall, and Grey Wolf in Greyhound.

Timothy Cain was once born in the Warsaw Pact-allied Deutsche Democratize Republic (DDR) under a different name in East Berlin, Germany. He, along with his siblings, emigrated to the United States of America at their father's behest, who also gave them new Anglicized names and would beat them if they used their old German ones. Cain's childhood in the United States was filled with suffering, as while he learned fluent English fairly quickly, he spoke with a thick German accent, causing Cain to suffer bullying problems.

Time in the Army

On his eighteenth birthday, Cain immediately enlisted into the US Army and soon began serving and fighting in the deserts of Iraq during Operation: Desert Storm. It was here Cain felt more emotionally alive than he ever had, and soon gained remarkable skill and a reputation for success during military operations, which resulted in a promotion to Sergeant and gave him the nickname of "Able", due to Cain believing he had discovered life's secret; it was cheap.

After finishing his tour of duty, Cain gained his officer's commission and enlisted in OCS. After years as an officer, Cain reached the rank of Major.

Cain was approached by representatives from the Umbrella Corporation, who wished for Cain to become the new head of their Security Division. Cain agreed and left the US Army, but on the condition he retained his hard-earned rank.

Cain often preached efficiency and productiveness to his subordinates. While Cain gained the respect of his fellow soldiers, many others felt he was grossly incompetent, having no sense of collateral impact on decisions and was short-sighted. Nevertheless, Cain soon ascended to become both Umbrella North American Operations Director & Vice President in Charge of Operations, recommending his old friend from his Army days; James Shade, to replace him as head of Security Division.

Cain used his success and obscene wealth to benefit his family. First, he bought his beloved father a house in Florida, secured his brother Michael a position as head of security at Umbrella's Chicago office (after being shot in the line of duty for the CPD and going slowly insane after his injuries got him reduced to desk-duty) and tracked the long missing second brother named Anthony down to a crack house and paid for his detox (though Anthony shortly afterward committed suicide). When his sister Mary divorced her husband upon finding out he was cheating on her, Cain paid for one of Umbrella's high-priced lawyers to take him for all he was worth ("and then some"), and later tracked him down and murdered him in revenge.

While at his office at Raccoon City, Cain received word from Shade, over an emergency line, that The Hive, the top-secret bio-weaponry development facility underground Raccoon, had shut-down and the Red Queen, the artificial intelligence controlling the bunker, wasn't responding. Concerned for what was going on, Cain gave permission for Shade and his hand-picked commando team to enter the Hive, shut down the Red Queen and retrieve it's hard-drive and escape.

As it turned out, the T-Virus, Umbrella's greatest bioweapon, had escaped into the facility and the Red Queen killed all inside to prevent it from escaping. Shade and his team were all killed by a combination of Red Queen, zombies and a Licker. The only ones to escape the facility were Alice, a security operative he hand-picked, and an environmentalist named Matt Addison.

At the time, Cain and a large division of troops were at the Hive's emergency entrance, and Cain overheard the duo's plan to use a salvaged case of t-Virus samples as proof of Umbrella's illegal activities. At this, Cain had his troops overrun and capture the two.

Noticing Addison's mutation at exposure from the virus by the Licker, Cain ordered him and Alice placed in the Nemesis Program, under Cain's rival Samuel J. Isaacs.

Cain would then experience his greatest failure; at his direction, the Hive was unsealed, releasing zombies and Lickers into the city, and resulting in a catastrophic outbreak of the t-Virus. All efforts to contain the virus failed, and Umbrella sealed off the city in preparation for a nuclear strike. This did not bother Cain in the slightest, as he believed that life was cheap.

It was Cain who woke Alice and Addison, now known as Nemesis, and let them loose in the city, hoping to test them against one another. His plan was undermined by Dr. Charles Ashford, creator of the t-Virus, who enlisted the aid of the survivors in the city to recover his daughter. Although the two subjects engaged each other, there was no clear conclusion to the battle - with Cain eventually ordering Nemesis to disengage.

It all came to a head at Raccoon City Hall. In order to convince Alice to fight Nemesis to the death, Cain executed Ashford by shooting him dead in front of her and threatened to kill the other hostages if Alice did not comply. She did so and ultimately emerged as the victor, though not after Alice learns the truth about Addison being Nemesis. Thereafter Cain wanted Alice to kill Nemesis and become involved with his plans, but she refused.

Unhappy with Alice's refusal to join him, Cain ordered Nemesis to kill her. It was not to be. Matt Addison regained control of his mutated body and the two bioweapons, along with Jill Valentine, Carlos Oliveira, and Lloyd Jefferson Wayne began assaulting the Umbrella forces gathered there. Cain fled to the helicopter as the battle ensued and made contact with Umbrella, ordering for the missile to be fired. He then prepared to escape but then noticed that the helicopter had not been taken off promptly yet. Cain went over to confront the pilot to demand why the helicopter hadn't taken off yet, only to come accross LJ - who had knocked out the pilot earlier on and had been hiding in the pilot's seat. Cain is about to react when LJ punches him in the face, causing him to fall to the floor unconcious.

The battle soon ended with Alice and her group emerging victorious, but not before Nemesis sacrificed himself for her when he shot down an Umbrella helicopter that ended up crushing onto him. Moments later, the survivors rushed into Cain's helicopter as a horde of zombies were on the verge of approaching them. They decided to eject Cain in revenge for Ashford's murder. At first he was unwilling to beg for his life, but his pride was quickly swallowed when Alice prepared to throw him out of the helicopter. Cain tried to bargain for his life by claiming to Alice that killing him would not put things right. Although she bitterly agreed, Alice proclaimed that it was a start and proceeded to throw Cain out of the helicopter.

Consequently, Cain fell to the ground and broke his leg on impact. He instantly found himself left at the mercy of the zombies, who were surrounding him. With the nuclear strike moments away, Cain knew he was going to die but was determined to do so on his own terms. He retrieved a handgun and used it to shoot at the approaching zombies, succeeding in killing one in the process, but quickly realized that resistance was pointless. In an attempt to spare himself a painful death at the hands of the zombie horde, Cain put the gun to his head and pulled the trigger - only for it to dry-click, having run out of ammo.

In an act of poetic justice, the first zombie to bite Cain was the last person that he'd killed: Ashford - with the latter having reanimated due to either the t-Virus in the air or the possible t-Virus in his body, meant to restore his handicap like it restored his daughter's. Cain could only scream in agony as he was dogpiled on by the undead Ashford and the zombie horde that slowly ate him alive to death.

Following Cain's death, the events he had set in motion led to the Global T-Virus outbreak; the nuclear strike on Raccoon City did not stop the virus, and it spread throughout the entire planet, drying up lakes and streams, reducing forests to deserts, and infecting humans and animals alike. Within five years, the vast majority of the Earth itself is little more than a barren wasteland, and only slightly over a million humans remain uninfected. For this, Isaacs regarded Cain as "the man who single-handedly destroyed the world." 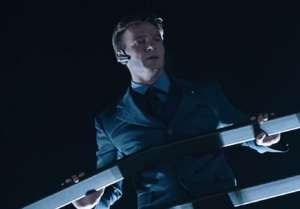 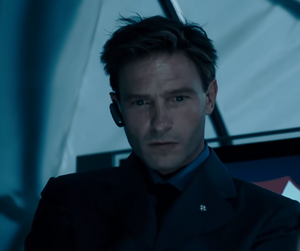 Major Cain orders his Umbrella employees to hunt down Alice and eliminate all S.T.A.R.S members

Major Cain greeting Alice on board his helicopter. 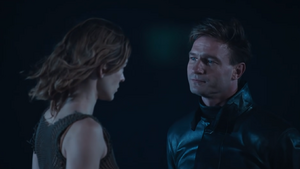 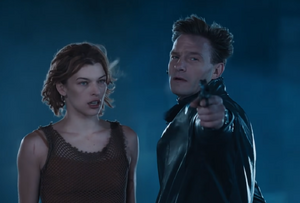 Major Cain executes Dr. Ashford in front of Alice in order to force her to battle Umbrella's mutated supersoldier Nemesis.

Major Cain tries to convince Alice to join him after she defeated Nemesis. 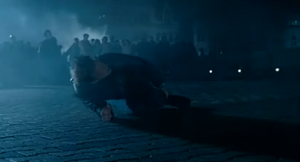 Major Cain after being thrown out of his getaway helicopter by Alice and left to die by a horde of oncoming zombies.

Major Cain being swarmed by a horde of zombies.

Major Cain dies as he gets devoured by the zombie horde, including the undead Dr. Ashford.