The Tin Man, is a mini-boss from the video game Alien Hominid.

It appears to be a tall, gray robot with out any facial expressions, and it's wearing grayer boots and gloves on. When pulled it's laser out, it appears to be laying on the ground, with a huge-blue laser coming out of it's back.

Tin Man was sent by the F.B.I Agents to exterminate Alien Hominid from progressing to the next level. It only appears in the level one, in front of the Steakery Cakery. The boss appears to be very predictable.

At the start it will jump to the other side of the screen, shooting it's laser onto Alien Hominid, some times he would jump at Alien and fight against it. Eventually the boss will start charging it self for another faster laser attack. Once Alien defeated the boss, it would self destruct. 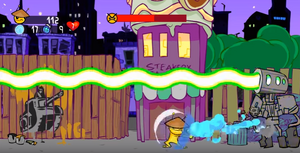 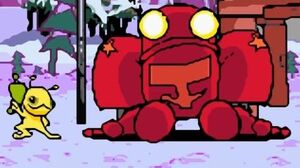 Retrieved from "https://villains.fandom.com/wiki/Tin_Man?oldid=3346879"
Community content is available under CC-BY-SA unless otherwise noted.