The Nutcracker and the Four Realms

The Tin Soldiers are the secondary antagonists of the 2018 Disney film The Nutcracker and the Four Realms. They are life-sized toy soldiers created by the Sugar Plum Fairy in her villainous plot to take over the Four Realms.

They were all portrayed by Shane Griffin, Maxamillian Hofgartner, Benjamin Mason, Kei Miura, and Blake Ridder.

Nothing much is shown of the Tin Soldiers' behavior, except for the fact that they are loyal guardians to Sugarplum in her plot to take over the Four Realms, even activating the machine to create more of themselves to enforce Sugarplum's reign. They are also willing to kill any enemies who would dare to defy Sugarplum's new reign; this was shown with them raising their swords to fight Mother Ginger's minions and gang of mice, and even one of them attempts to strike down Captain Phillip Hoffman without hesitation.

However, the Tin Soldiers are not without emotion; as shown during the invasion on the Land of Amusements, one of the Tin Soldiers accidentally stabbed another one in the back while trying to the fight the Mouse King and his army of mice. Upon realizing what had actually happened, the Tin Soldier backed away in fear as he did not intend to do hurt his comrade.

Following the departure of Queen Marie Stahlbaum as she wanted to raise a family, Sugarplum felt embittered and decided to take over the Four Realms as its new Queen (despite the fact that Marie left Sugarplum and the other three regents in complete control of the Four Realms). To do so, Sugarplum created a series of tin soldiers and found out that Marie had created a machine called the Engine that can turn toys into living objects with the utilization of a key that can activate it. However, Mother Ginger learns of the plot and tried to stop Sugarplum, but the latter frames her, resulting Ginger to be banished within her own Realm (the Land of Amusements) and the other three realms to wage war. However, Sugarplum is upset to learn that the key is lost in the forest.

It was never until the arrival of Marie's youngest daughter Clara, who found the key in a tree before it was stolen by a mouse (who is working for Ginger). After meeting up with Sugarplum and the other regents, Clara manages to steal back the key before reuniting with Sugarplum and the other regents. Delighted by this, Sugarplum uses the key to activate the Engine into creating the Tin Soldiers, right before revealing her true colors and goals to use the Tin Soldiers to take over all Four Realms and rebuild them in her own image. Sugarplum then imprisons Clara and the other regents to ensure that they will not get in the way; even when Captain Phillip Hoffman furiously attempts to defend Clara, two of the Tin Soldiers easily disarmed him and had him locked up with the others. The Tin Soldiers were also given free reign over the Engine to create more of themselves for the imminent invasion.

However, Clara and the others were able to escape while Hoffman convinces Ginger and her minions into helping them into foiling Sugarplum's plot. As Sugarplum directs the Tin Soldiers into invading the Land of Amusements, Hoffman and Ginger's minions manage to fight off several Tin Soldiers, allowing Clara and Ginger to successfully enter the Engine's room where Clara shuts down the machine, causing the palace's water wheels to cease rotating and catching Sugarplum's attention.

As Ginger fights off several Tin Soldiers to buy Clara more time, an angry Sugarplum summons more Tin Soldiers to trap Ginger and Clara. They all watch without emotion as Sugarplum intends to turn Ginger into a toy with the Engine, but Clara has already reprogrammed the Engine into zapping Sugarplum, turning her back into a lifeless porcelain doll as punishment for her crimes. With Sugarplum dead, all the Tin Soldiers became lifeless and fell down in defeat.

With Sugarplum and the Tin Soldiers defeated, the Four Realms are finally at peace, and Clara is returned back to her family. 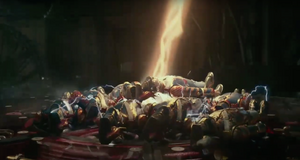 The first batch of Tin Soldiers brought to life by Sugarplum. 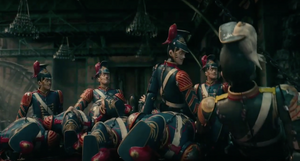 The Tin Soldiers rising up to power. 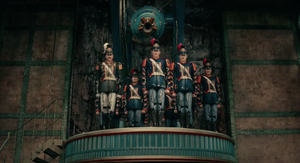 The Tin Soldiers standing tall in report for duty. 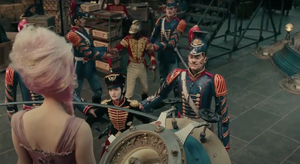 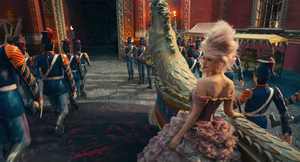 The Tin Soldiers preparing for battle after Sugarplum imprisons Clara and the other regents. 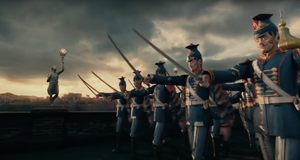 The Tin Soldiers arming themselves with their swords as they prepare to invade the Land of Amusements on Sugarplum's command. 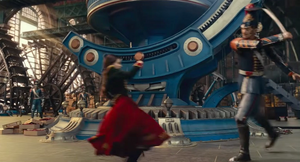 A Tin Soldier attempting to strike down Clara. 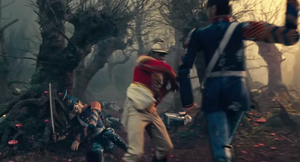 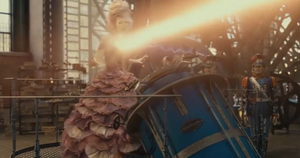 Several Tin Soldiers watching in horror as Sugarplum is being turned back into a lifeless doll as punishment for her crimes. 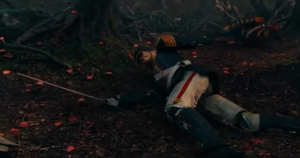