Tina Paulson is the main antagonist from "A Man a Mile", episode 1.05 of CSI: NY.

She was portrayed by Sarah Tareen.

Tina Paulson is the best friend and schoolmate of Hannah Recchi, whose body was found in the river. She was one of two girls, the other being Melissa Wesley, interviewed by Stella Bonasera and Aiden Burn, with both having nothing but kind things to say about Hannah. They would cross paths with Tina again when it was uncovered that Hannah was dumped near a club owned by Tina's older brother, Matt, who denied knowing Hannah until video of the two of them kissing revealed otherwise.

Stella notices a bloody strap, with Tina stating that it was from a fox hunt that her father took both her and Hannah on in England, with Tina revealing that her father (who passed on 6 months before the events) chose Hannah for the honor of blooding - which had him marking Hannah with the fox's blood. When Stella and Aiden first saw the video, they also spotted another girl walking towards them, but could not identify her until the episode's climax, when the other girl was revealed as Tina. Both of them also noticed that in one shot, Tina's purse was intact, but the strap was missing in the next shot, and that ended up revealing Tina as Hannah's killer.

Tina (with her lawyer present) was interrogated by Stella, who revealed Tina's motive for killing Hannah: jealousy. Tina had longed for her father to take her on his various hunting trips, and when she and Hannah went, her father chose Hannah for the blooding, making Tina envious of her friend. Her jealousy increased when she spotted Hannah kissing Matt, leading to Tina angrily confronting Hannah and later turning heel by strangling Hannah to death with her purse strap and dumping Hannah's body in the river.

During her interrogation, the evil Tina expressed her sadistic pleasure over killing Hannah, comparing her murderous act to killing a fox. She added that she enjoyed watching the life drain out of Hannah's eyes. Afterwards, Tina was then arrested for her crimes (off-screen). 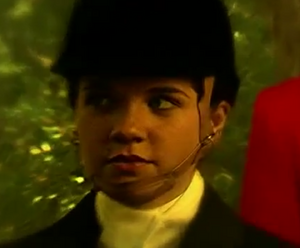 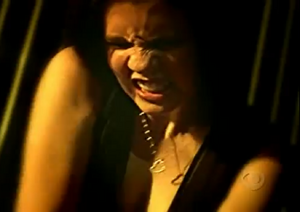 Retrieved from "https://villains.fandom.com/wiki/Tina_Paulson?oldid=4109158"
Community content is available under CC-BY-SA unless otherwise noted.