Bully anyone who makes fun of her.

School Bully
Tina Rex is an antagonist in The Amazing World of Gumball. She is a school bully at Elmore Junior High. She is a large Tyrannosaurus who often torments Gumball and Darwin. She lives in the city dump and sleeps on top of a garbage pile. She has also never owned a toy before. She appeared in The Third in a cameo, but her first speaking role was in The Dress when she asked Gumball (while he was in a dress) "who are you?".

Tina has attempted to eat Gumball twice so far. The first try was in The Quest, and then again in The Mystery. In The Quest she actually tried to eat Gumball, Anais, and Darwin. Tina is seen to have a sensitive side (as most bullies do) as shown in The Quest. She participated in the chase for Gumball in The Mystery. Tina lives with her father Mr. Rex, who is a savage and animalistic tyrannosaur. Tina often engages in bullying acts with her best friend and sidekick Jamie (who is possibly Tina's only true friend). Tina and Jamie once forced Anton to join her gang against his will. Although Tina is female, she has a deep masculine voice.

Gumball became aware of Tina's bullying in The Fight, and was given a black eye which was believed to have been from Tina, but was actually because he ran into a door. It was revealed that Tina was not really a bully, just misunderstood - she just wanted to chat with Gumball and all of her "bullying" actually meant that she wanted to play. Everyone feared her due to her size and assumed she was a barbaric brute like her father. Afterward, Tina and Gumball became friends. 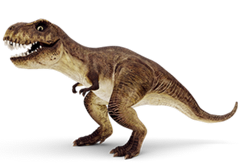 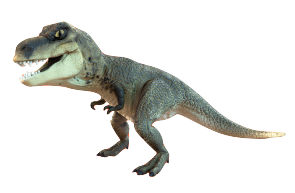 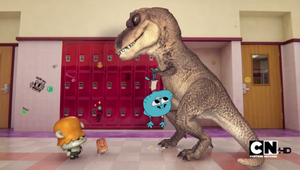 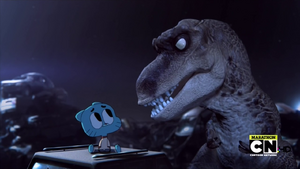 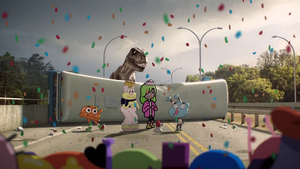