Villains Wiki
Register
Don't have an account?
Sign In
Advertisement
in: Tragic, Friend of a Hero, Evil Vs. Evil,
and 39 more

Leader of the Underground

Phin Mason, also known as the Tinkerer, is the central antagonist of the 2020 video game Marvel's Spider-Man: Miles Morales. She is the leader of the Underground, a gang of criminals who waged a war against Roxxon. She is also Miles Morales' best friend and temporarily turned enemy.

She is portrayed and voiced by Jasmin Savoy Brown, who also played Alexis Reeves in Sounds of Violence.

Phin Mason was born on 21 February 2002 in Brooklyn, New York. She was a childhood friend of Miles Morales, sharing both his intellect and technological prowess. The two grew up together in New York City, New York, and became best friends at school. It was there that they worked together to win the Spacebound Young Researchers Award. The two drifted apart for an unknown amount of time, as she enrolled in Midtown High School.

Phin also has an older brother, Rick Mason, who is another of Miles' childhood friends. It was Rick's death at the hands of the negligent Roxxon corporation that kick-starts the main plot of Marvel's Spider-Man: Miles Morales. Over the course of the game, it's revealed that Rick discovered the hazardous side effects of Nuform, Roxxon's new energy source, and was killed after trying to end the project. In order to take revenge against Roxxon for his death, particularly against R&D head Simon Krieger, Phin assumes the identity of "The Tinkerer."

Phin's friendship with Miles is changed after learning he is Spider-Man after she almost killed him in a chase through the New York City. Later, the two decide to meet again at Trinity Church to discuss the state of their relationship after betraying one another's trust, but are interrupted by Rhino. Now working for Roxxon, Rhino claims he was sent to capture both, sending them to a secret facility underneath New York.

While in Roxxon's custody, Phin expresses her disdain for Simon Krieger during an interrogation, telling him that she will make him pay for what he did to her brother. After her escape from the facility however, she foolishly turns on Miles after he stops her from killing Rhino. Angerily beating him up. Phin tells Miles she will not give up on her plan against Roxxon, and that she will not hesitate to kill him if he ever tries to stop her again.

Later, Phin finally takes the NuForm sample to the Roxxon Plaza, planning to overload the reactor to destroy the complex, but is faced again by Miles. Morales tries to warn her that Krieger had already overloaded the reactor in advance, and that she will instead blow up all of Harlem if she overloads it more. Phin decides to carry on with her plan, ignoring Miles' warnings she beats up up once again, then Miles finally fights violently back, as they both start to fight as she keeps immaturely insluts him as Miles keeps trying to tell her that he's telling the truth that she's putting everyone in danger and she mindlessly keeps thinking he's lying to her again, until Miles decided to give her another truth that her brother Rick would hate what she's become. After a long battle, she gets temporarily defeated by Miles and finally starts to believe Miles when she witnesses as the overloaded reactor destroyed some buildings around the plaza.

Phin soon realizes that Miles is right about Nuform blowing up all of Harlem instead of the plaza, the explosions cause her to almost fall to her death. Phin apologized to Miles for not listening and for becoming someone who causes problems instead of fixing them. Once Miles performs a selfless act by absorbing the energy from the Nuform core, Phin sees he that he's doing the exact same thing Rick did before he died, she carries him up above New York. She convinces him to release the energy and he does so, sacrificing her own life for his and the citizens of Harlem to make up to Miles and everyone for her reckless actions.

Even after her death, the Underground has all supplies created by her against Roxxon. However, Roxxon already suffered a lawsuit because of Krieger's arrest, when its former enforcer Prowler turned himself to the police and help testifying against the corrupted company, avenging Rick and Phin's deaths.

Phin's personality shifts depending on her role. As The Tinkerer, Phin is a ruthless, temperamental, distrustful and cold person who is blinded by anger and revenge, wishing to expose Roxxon and Simon Krieger for whom they really are for releasing Nuform despite the illness it held and for murdering her brother. Going so far as to even risk the destruction of Harlem, New York if it means Roxxon's failure. However, unbeknownst to her, Phin herself is instead being manipulated by Simon into further his greed, meaning unlike Doctor Octopus, Phin does not intent to destroy Harlem itself, should she unknowingly destroyed the town instead of just a Roxxon Plaza. She has also shown to be very arrogant and immature, despite her intellect she never listens and made her foolish enough to betray her own friend Miles when he only tried to stop her from becoming just as bad as Krieger. 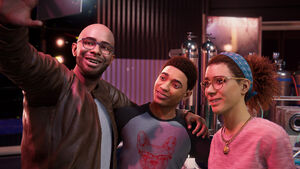 A younger Phin and Miles with Rick. 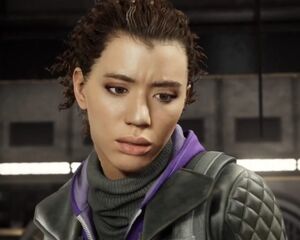 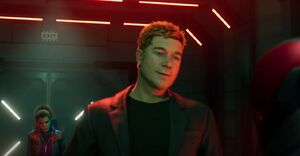 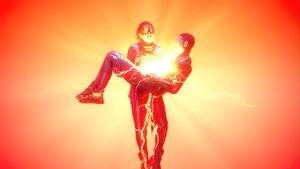 Phin's noble sacrifice, allowing Miles to release the energy to save Harlem.