Abusing Scorpan and his minions.

Bring eternal darkness to the world and corrupt everything (failed).

Tirac is the main antagonist of the My Little Pony episode "Rescue at Midnight Castle". He is a demonic centaur who resides in the forbidden Midnight Castle alongside his minions and his servant/slave Scorpan, whom he orders to kidnap the ponies of Dream Valley to execute his plan of creating eternal night.

He was voiced by Victor Caroli, who is most well-known for his narration of much of the Transformers franchise, having also voiced Megatron in a Micromaster Combiners commercial.

Tirac's design is quasi-satanic in inspiration as his character would suggest, with reddish skin and unique horns that centaurs are not often depicted with. He wears spiky bracelets and dons a metal armor, slightly covered by the pouch hanging from his neck which contains the Rainbow of Darkness, his source of power, main weapon, and, implicitly, his heart, turned into magic.

His fur, horns and armor are all the same color, possibly to fit in with the dark surroundings that he is in, though it is also possible that the budget limited his color scheme. In the original special, they are all given a grayish-blue color, but when they remastered the G1 cartoon, they recolored him to be green.

Though his background is unknown, what we do know is that Tirac wielded the Rainbow of Darkness, a powerful satchel containing evil magic which corrupts everything it touches. It can even turn the ponies he captured into evil dragons which were used to pull his "Chariot of Midnight" and execute the event called the "Night that Never Ends", on which he will use the Rainbow of Darkness to corrupt the sky, and in turn Dream Valley and the rest of the world. To achieve this, he took over a kingdom and made their prince, Scorpan, a gargoyle-like demon to serve as his second-in-command, sending him to capture the ponies and bring them to him.

Once Scorpan captured the four ponies his master requested, Tirac turned three of them into dragon-like monsters except for Ember who was too small (something Scorpan knew very well), thus Tirac ordered Scorpan to imprison her and go back to get a fourth pony, and to make sure he didn't try to stall him for midnight again, Tirac threatened Scorpan to kill Spike, a close friend of his. When Megan and the ponies came to the castle to save their friends, Tirac's guards captured Applejack and Tirac turned her into another dragon-like monster while Scorpan, finally free from the Rainbow of Darkness' control, betrayed Tirac after releasing Spike and Ember and attacked the guards, fleeing alongside the ponies. However, now with the four ponies corrupted, Tirac takes off in his Chariot of Midnight, beginning his spell to turn day into everlasting night. Scorpan tried to stop Tirac but he was easily defeated in a physical confrontation. Megan and the ponies temporarily take the pouch containing the Rainbow of Darkness off Tirac's hands but he eventually gets it back. As Tirac states that the game is over and the power is his, Megan exclaims that they too have a power of their own, one Mr. Moochick (the only being who knew of Tirac's existence) gave them in a heart-shaped locket: The Rainbow of Light, the only thing that might help defeat Tirac. At first it's only a small piece that is soon enveloped in darkness, but the Rainbow of Light starts fighting back, and eventually overpowers the Rainbow of Darkness. Tirac was destroyed by the Rainbow of Light, freeing Scorpan from his spell and turning him back into his human form, as well as everything the Rainbow of Darkness had corrupted.

In this version, he is known as Lord Tirek and serves as one of the main antagonists of the series. This version is slightly less evil than his G1 counterpart.

Tirac is a horrifyingly sadistic and power-hungry monster who especially stood out in a show that was meant to be for a fairly young audience. He was a Devil figure who only sought an eternal night and used the Rainbow of Darkness to transform Little Ponies into horrific monsters, alongside anyone else who opposed him. He is a menacingly monstrous and hateful creature with a disregard for innocent life, and takes particular sadistic pleasure in turning especially children into horrendous creatures deprived of any sign of individuality or innocence. Tirac was surprisingly violent and cruel as well, as particularly shown when Scorpan failed him several times he threatened to behead Spike as punishment, which is exceptionally wicked as Spike is a baby dragon.

Despite his violent tendencies and apparent barbaric sadism, Tirac is actually very intelligent and mindful, as he knows full well on how to manipulate his victims into working for him, even if it means brainwashing, threatening, abusing, and even killing them, all to keep them all under control.

Compared to all the other My Little Pony villains, old and new, who are either obsessed with total power, or more importantly, either lost their way, have their share of morals, or have redeemed themselves in the end, Tirac openly understood the difference between good and evil, but gleefully embraced his evil side, and has a disturbing enjoyment on spreading his darkness to other creatures, not even caring if they were innocent or even harmless. By that logic, his utter sadism and obsession with darkness, domination, and power makes him all the more irredeemable, and thus makes him one of the most (if not the most) demented and hateable of all the other villains in the franchise, especially compared to the other villains in the older My Little Pony series, who are almost as bad as him. And considering the fact that he comes from My Little Pony regardless, that is certainly an achievement in itself.

When Tirac reappeared in Friendship is Magic, now known as Lord Tirek, he somewhat retained his menacing and manipulative nature, despite having a new story and goals, and remained obsessed with power, and though he wasn't quite as depraved and violent as this version is, he still stood out in terms of villainy there nonetheless.

Tirac possesses incredible strength, being able to take down his second-in-command Scorpan (who is strong enough to rip a prison door off a stone wall with apparent ease) in just two blows. Mr. Moochick also states that the only thing that might help defeat Tirac is the Rainbow of Light. The implication that his main weapon was once his heart which he removed from his chest also suggests he has astonishing pain tolerance and endurance, as well as potentially some degree of immortality, assuming what Mr. Moochick said was true.

The Rainbow of Darkness

Tirac's main weapon and source of power. It twists and corrupts anything it touches, be it sentient beings or even the sky, turning the former into monstrous versions of their former selves (like butterflies and ponies into draconic monstrosities or birds and humans into demons like what happened to Scorpan and his guards, who were also given weapons created by the Rainbow of Darkness) and causing the latter to become night for eternity. Its ability to warp reality to such an extent, to where it created Midnight Castle out of a large tree and the huge body of water surrounding the fortress, is quite frightening, especially with the implied range that, once it was cast into the sky, victory would've been assured for Tirac, as the Rainbow of Darkness would've potentially spread across the Earth and turned the planet into Tirac's own version of Hell.

Everything that was transformed by the Rainbow of Darkness followed Tirac's every order without second thought, even a transformed prince like Scorpan, who presumably only managed to break free of its control by the end thanks to how much he'd seen Tirac do and/or thanks to his strong power of will.

Also spelled Stratadons, either spelling meaning something along the lines of "tooth from the sky", befitting their draconic appearance and powerful jaws which they used to carry the ponies back to Midnight Castle. They are strong enough to smash through trees and carry ponies on their jaws or arms (or Scorpan on their back) with ease, and fast enough to contend with most pegasi, even catching the fastest among them, Firefly, off guard at one point.

A Stratodon attempts to capture Megan

As their name implies, these are Tirac's minions who are tasked to protect Midnight Castle from intruders. Unlike the Stratodons, they are capable of speech and thus have greater intelligence, at one point sneaking up on the ponies once they've infiltrated Midnight Castle and capturing one of them while the others don't realize it. They are armed with sharp spears which can also be thrown, and a single guard is already strong enough to overpower a pony like Applejack, who is among the strongest of her kind.

The guards stop Ember from interfering

Tirac is often considered to be the best antagonist in all of My Little Pony, not just the G1 series, with the only ones able to challenge that claim (as far as the G1 villains go) being Grogar, thanks to his ruthless nature and overall satanic-inspired character. He is one of the main highlights of the first generation and the Rescue at Midnight Castle special as a whole, due to being a big surprise for most who watch the special, expecting something fun and cutesy up until Tirac's Stratodons attack and carry them somewhere, with Scorpan ominously saying "You are all doomed! Soon every pony will belong to Tirac, the Master of Midnight Castle!" being the selling point that there's more to the special than meets the eye, without having seen Tirac yet, who is smartly kept in the shadows, with only his powerful voice along with his hand and hooves being heard and seen, until the end of the first half of the special, or the end of the two-parter after it was re-released on DVD, and once he is revealed to the audience, he steals the show for most people with his surprisingly intimidating appearance and the threat to behead Spike, a baby dragon, a threat that could've only been allowed in such an era and has yet to be duplicated in the franchise (though honorable points go to Chrysalis for almost doing something similar, albeit with a much older Spike). 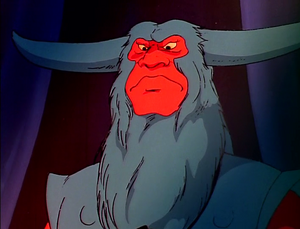 Tirac reveals himself from the darkness

Tirac using the Rainbow of Darkness 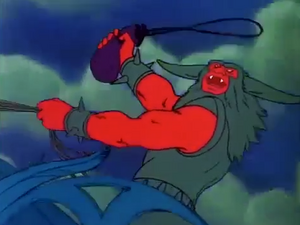 "The game's over, little ponies, the power is MIIINE!!"

Midnight Castle
Add a photo to this gallery 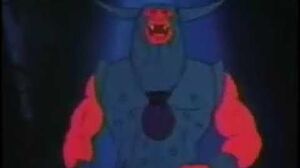 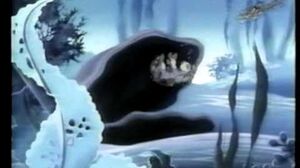 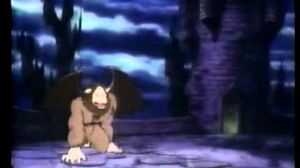 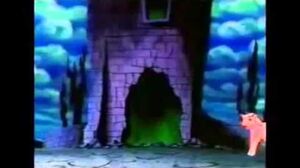