Villains Wiki
Register
Don't have an account?
Sign In
Advertisement
in: Mature, Female, God Of War Villains,
and 14 more

Tiffany
Fury of the Mind

Member of the Furies

Tisiphone is the secondary antagonist in the videogame God of War Ascension. She one of The Furies and is the Goddess of Vengeance.

She was voiced by Debi Mae West, who also voiced Atropos in God of War II and Maiev Shadowsong in the World of Warcraft series.

During the war against the Primordials, all the negativity created the Furies. One of the them was Tisiphone. Years later as Zeus and the Gods of Olympus came to power, the Furies became power hungry, and seeked to overthrow the Olympians. One day, Tisiphone and her sisters came across Ares. They three found that Ares also seeked to overthrow Zeus and the Olympians. So the four formed a partnership, and eventually a romantic relationship. During their partnership, Ares sent the Furies to meet with Zeus. The Furies made a deal with Zeus that every time someone betrays the Gods of Olympus, the Furies would capture, and torture them. The first one they capture was a Titan named; Aegaeon. They captured, and tortured Aegaeon, until his entire body became a prisoned of the damned.

After Alecto, and Ares gave birth to Orkos, Ares and the Furies decided to train him to be a powerful warrior that can bring down the very walls of Olympus. But they quickly found out that Orkos had little to no bloodlust in his body. Disappointed by his son, Ares disowned him. Despite this, Orkos' mothers decided to make him into an Oathkeeper. Eventually, Orkos found out about Ares and his mother's plans to overthrow Olympus thanks to his lover; Aletheia.

The two tries to warn Zeus about his parents' plans, but Ares learned of Orkos' treason. So Ares sent the Furies to intervene. The Furies managed to capture Orkos and Aletheia. Orkos was to be punished by his mothers, while Aletheia had her eyes ripped out, and was imprisoned in her own temple, guarded by Pollux & Castor. The Furies then placed the eyes in a lantern of the Statue of Apollo so no Olympian can learn of their plans.

Some time after Kratos killed his family and swore his revenge on the God of War, The Furies tried to do everything in their powers to keep Kratos' Blood Oath with Ares. When Kratos reached the Island of Delos, The Furies tried to prevent him from acquiring the Eyes of Truth. Megaera tried to confront Kratos, while Tisiphone created illusions of Spartan soldiers to kill Kratos.

After Megaera had her right arm cut off, Tisiphone, along with her pet; Daimon arrived to assist her. Despite it being two against one, Kratos was able to defeat Megaera, and "kill" Tisiphone. However, when Alecto arrived and trapped Kratos with a black slime, Tisiphone appeared beside her, revealing that Kratos only killed an illusion of her. Just as the Furies were about to imprisoned Kratos, Orkos arrived and teleported him and Kratos far from his mothers.

After Kratos was successful in reconstructing the Statue of Apollo and unlocked the Eyes of Truth, the Furies arrived. Kratos attempted to attack the Furies, each one managed to steal one of Kratos items, with Tisiphone and Daimon stealing the Oath Stone of Orkos. Without the stone, Alecto was able to capture Kratos. The sisters then brought both Kratos and Orkos, for whom they subdued a few moments ago, to Aegaeon.

For an entire week, Kratos was tortured by the Furies. After Megaera accidently released Kratos from the bonds that held him, he eventually came across a house, filled with women who wanted to sleep with him. Kratos eventually found out that it was only an illusion made by Tisiphone because Tisiphone was wearing a ring that belonged to his deceased wife. Kratos attacked Tisiphone, but before the two could fight each other, an one armed Megaera rammed into Kratos say that she wanted to kill him.

After Megaera was killed, Kratos eventually came across another illusion. Tisiphone took the appearance of the King of Sparta. But just like before, Kratos saw the ring on the King's finger, the same ring that belonged to his decease wife. Kratos attacked Tisiphone, but Tisiphone quickly fled to a separated part of the prison. When Kratos managed to catch up, Tisiphone had Daimon attack Kratos. With Daimon near him, Kratos managed to rip out the Oath Stone of Orkos out of Daimon's chest. After which, Tisiphone retreated.

Some after Alecto failed to attempt Kratos to rejoin the God of War, both Alecto and Tisiphone teamed up to confront the Ghost of Sparta. Tisiphone used multiple illusions to kill Kratos, but Kratos was able to break through the illusions thanks to the Eyes of Truth that he snatched from Alecto. After Alecto was weaken, Tisiphone tried to defend her sister. She sent out Daimon to kill Kratos. But Kratos managed to kill Daimon. Kratos then proceeded by punching Tisiphone to death.

Every time Kratos punched her, Tisiphone took the forms several illusions, including the King of Sparta telling him he was not fit to be a Spartan. She even took the form of Kratos himself, before he became the Ghost of Sparta, telling him that he lost everything because of his own actions. Kratos then proceeded by choking Tisiphone. During which, Tisiphone to the form of Lysandra, which caused Kratos to briefly stop. But Kratos quickly saw through Tisphone's illusions and continued to choke her. Before she died, Tisiphone created one more illusion; she took the for of the Village Oracle that warned him all those years ago. Tisiphone told Kratos that his family weren't in the temple to die by chance. Kratos ended Tisiphone and her illusions by snapping her neck. 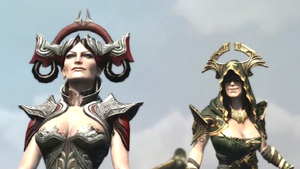 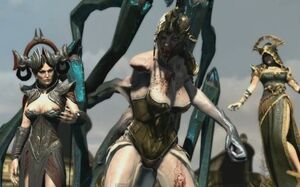 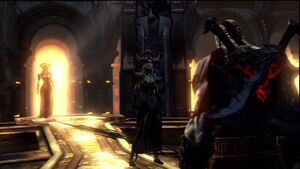 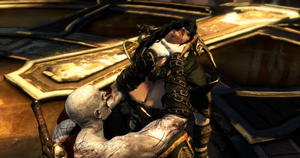