Titan is an antagonist from the first season of Yu-Gi-Oh! GX. He is a member of the Shadow Riders.

He was voiced by Norio Wakamoto in Japanese and Eric Stuart in English.

In one of the early episodes, Titan is seen as a hitman hired by Vellian Crowler. He is supposed to beat Jaden Yuki in the abandoned dorm. If he would win, Jaden would have been send from Duel Academy. Titan makes Jaden belief he has the power of a Millennium Item, but after a while, Jaden finds out he is just a fraud and beats him. Because he is beaten in the cursed "Abandoned Dorm" he gets sucked into the Shadow Realm.

A Reason To Win

Kagemaru promises to help Titan out of the Shadow Realm if he promises to fight as the sixth Shadow Rider. When Titan accepts this deal, he gets his Shadow Charm, the Shadow Mask. He uses the mask to appear to one of the "Keykeepers" Alexis Rhodes in a dream. He tells him he can tell her the secret about the missing memories of her brother, if she comes to the abandoned dorm. When she goes there, the rest of the "Keykeepers" follow her, and watch her duel. However, Titan has changed and has real Shadow powers now, so he is no longer a fraud. After a long and hard duel, Alexis manages to beat him, and he gets sent to the Shadow Realm once again.

Titan duels with an "Archfiend" deck. 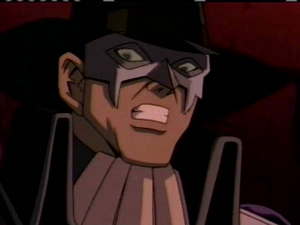