Defeat Iron Man in order to win back the Communist Party's favor (failed).

Retrieve the third Crimson Dynamo and bring it back to the Soviet Union (failed).
Kill Iron Man in another attempt to win his superiors' favor (failed).

Terroristic Supervillain
Titanium Man is an antagonist in the Marvel Comics universe and an enemy of Iron Man. Four individuals have used the Titanium Man persona, with most of them being Soviet or Russian agents. These people are listed in the following: Boris Bullski, Kondrati "Gremlin" Topolov, and two unknown supervillains.

The first and original Titanium Man, Boris Bullski, was born in Makeyevka, Ukrainian SSR, Soviet Union. According to the Black Widow, he was a KGB-member when he was a young man, and she was his combat instructor for a time. An ambitious official of the Communist Party of the Soviet Union, Boris Bullski was demoted after displeasing his superiors.

While working as an administrator of a Siberian labor camp, he commissioned the imprisoned scientists at the camp to build a suit of armor using the lab of Anton Vanko, the creator of the original Crimson Dynamo armor. Seeking to win back the Party's favor, Bullski conceived the idea of winning a propaganda victory against the West by defeating the American superhero Iron Man. He assigned the scientists to create a powerful suit of titanium armor based on the Iron Man technology, though the inferior resources available to the scientists meant that the armor was twice the size of Iron Man's. Bullski received permission to issue his challenge and Iron Man accepted, defeating Titanium Man in a battle before a worldwide television audience.

Undaunted, Bullski prepared for a rematch by having the suit redesigned and undergoing medical treatments that increased both his size and strength. Traveling to the United States, Bullski fought Iron Man in the skies above Washington, D.C. but was defeated. Withdrawing for retrieval by a Soviet submarine, he discovered that he had been abandoned on orders from Moscow. After working for the Vietnamese Communist scientist Half-Face (who increased his power yet again) for a while, he returned to the service of the Government of the Soviet Union, and was dispatched to the United States to retrieve the third Crimson Dynamo. Finding the Dynamo at Cord Industries, a three-way battle between Titanium Man, Crimson Dynamo, and Iron Man began, during which Titanium Man killed Janice Cord with an electronic beam. Enraged, Iron Man soundly defeated Titanium Man, and left him in the murky depths of the Hudson River.

After the defeat, the two disgraced Soviet agents fled to Communist-controlled Vietnam, where they joined with Radioactive Man to form the Titanic Three. Though Bullski enjoyed working as a sanctioned agent once again, he longed to return to the Soviet Union, and devised a new plan to win his superiors' favor. Adopting the alias of "The Other", he dispatched another former Soviet agent, the Unicorn, to destroy Iron Man. When the Unicorn failed, the Titanium Man went to destroy Iron Man himself, only to fail once more.

Despite his failures, Bullski was in favor with the Soviet government once more, and returned to the United States on a mission for the KGB. By threatening the parents of a Soviet defector named Sergei, he forced the man to design technologically advanced armored suits that could be transformed into small card-like objects. Posing as "the Commander", Bullski used the suits to equip members of the Green Liberation Front (G.L.F.), an organization of disaffected Vietnam War veterans who felt ignored by their country. With the suits, the G.L.F. robbed a New York City bank and the Federal Reserve Bank of New York; though the members believed that they were simply acting as thieves, Bullski used the robberies as a cover for implanting a computer virus that would destroy American financial records, causing chaos in the economy of the United States. Beta Ray Bill and Sif opposed the G.L.F. and the Commander, but when Sergei discovered that his parents were dead he exposed Bullski's true identity and the angry members of the G.L.F. turned on the Titanium Man. Teleporting away, he rematerialized in card form, which Sergei then simply tore and threw away.

Sometime later, the new Crimson Dynamo was sent to the United States by the Soviet government to retrieve the remnants for reintegration. The G.L.F. discovered the Crimson Dynamo's mission and attacked him, forcing him to seek assistance by reactivating the Titanium Man, who due to the incomplete nature of his reassembly was still missing body parts. Enraged, Bullski slaughtered the members of the G.L.F., and was only stopped when the Dynamo lured him over the Atlantic Ocean and returned him to card form. Bullski was later restored and continued to serve as Titanium Man, as a member of the Soviet Super-Soldiers and later Remont-4, but felt increasingly despondent as the Soviet Union declined. After an attack on a Stark Enterprises factory in Russia he was believed killed while battling Tony Stark, who was wearing Crimson Dynamo armor that was being controlled by Colonel General Valentin Shatalov, a former friend of Bullski.

Sometime later, during a space mission to destroy an enormous asteroid that threatened to impact on Earth, a Titanium Man, stated his name was Andy Stockwell (revealed to be an alias to Bullski), and had never had a connection with the USSR. However, moments later it was revealed he was actually a member of "The Hammer", an international network of communist sleeper cells who wanted to destroy the United States. He was lost in space, but being relatively close to Earth, may have returned under his own power.

Now a mercenary, Bullski was hired by Tony Stark to fake an attack on Congress trying to show reasons to stop the superhuman registration act. He battled Spider-Man there and made a withdrawal after Spidey damaged his helmet with his cybernetic claws, but not without saying to a camera in Spider-Man's Iron Spider suit a planned talk which Stark used in the Congress in rejection of the SRA.

The Titanium Man reappeared, this time in Russia, as a member of the rogue Soviet super-rebel group called Remont Six. He was knocked out by Darkstar, but was apparently not captured.

Some time later Titanium Man was seen being beaten down by the Protector. The identity of this Titanium Man or the circumstances of the battle remain undisclosed, but he is presumably Bullski, because he was wearing that version of the armor.

During Doctor Octopus's latest scheme, Octavius contacted the Titanium Man as one of several villains to assist in his plans after two of the Sinister Six were defeated, but this backfired when the Titanium Man contacted the Black Widow to warn her about the villain's current schemes, defining himself as a Russian patriot rather than an American villain, and obeying Spider-Man's call to rally other heroes against his foe. When Titanium Man entered one of Doctor Octopus' facilities, he was defeated by Scorpion despite his best efforts.

The second Titanium Man was Kondrati Topolov, the mutant formerly known as Gremlin and a former adversary of the Hulk, and served with the Soviet-era superhero group, the Soviet Super-Soldiers. The Gremlin was killed in combat with Iron Man during the first "Armor Wars" when the titanium in the suit exceeded its combustible temperature.

The Third Titanium Man was among the Iron Man villains recruited by Mandarin and Zeke Stane to assist in a plot to take down Iron Man.

During the Infinity storyline, the Fourth Titanium Man is among the villains recruited by Spymaster to help him attack the almost-defenseless Stark Tower. Titanium Man attacks Blizzard and Whirlwind when they try to abandon the mission. During the fight, it is revealed that Titanium Man is the Kree Captain At-Lass who was sent by the Kree to steal Iron Man's armor.

A Soviet Titanium Man, developed for the Russians by Doctor Doom, proved the better of the Iron Man prototype. Later, the same individual was shown, together with the Crimson Dynamo, as a free agent working for HYDRA. This Titanium Man was physically similar to the original mainstream version. He is later killed by Doombots along with Crimson Dynamo and Black Knight.

In the House of M reality, the second Titanium Man was seen as a member of the Soviet Super-Soldiers.

The Ultimate Marvel version of the Titanium Man is Howard Stark Sr. (grandfather of Tony Stark) when the character was featured in Ultimate Comics: Armor Wars, although parts of him resembled Iron Monger as well.

Howard Stark, Sr. faked his own death when his grandson was extremely young. He then went to work for Project Tomorrow, a project where he created human/machine hybrids, thus the Arsenal Units were created. When Howard desired "an upgrade" for himself, he hired Ghost and Justine Hammer to steal the upgrades from Tony Stark's labs. After the Ghost, an item mysteriously known as Remnant 242, Howard was confused about what the item can do. This forces him to have Tony kidnapped and brought to Project Tomorrow. There he was able to coerce Tony to unlock the item of Remnant 242, but was surprised to instead discover the decapitated head of an alternate Tony Stark. Tony revealed that he discovered it when he was with Reed Richards experimenting with his multiversal gate when the head came through from its dimension. Howard was then killed when the head activated a self-mechanism that could shut down and destroy machinery, which caused Howard to die instantly without his damaged machine body

Another Titanium Man appears in the pages of Ultimate Comics: Ultimates #18. Jake Miller was employee of the Crystal Lake Energy Complex. During the HYDRA attack to the United States (in the "Divided We Fall" storyline), he volunteered to enter the unattended nuclear plant in order to take control and prevent a catastrophe, but his family was killed by Hydra soldiers while he was away. In despair, Miller built a titanium armor using Quark-based pirated technology, and led to the nuclear plant in order to blow it up in revenge of the country. He was stopped by the Ultimates, who convinced him to surrender. 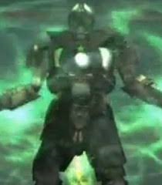 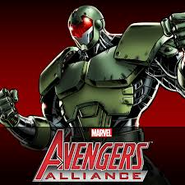 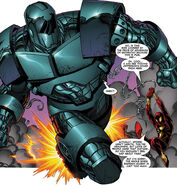 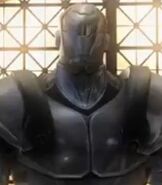 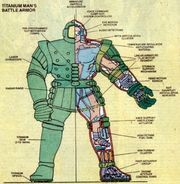 Titanium Man with other supervillains