Titus Weld is one of the two main antagonists (alongside his brother Syd) of the 2018 Netflix original Benji.

He is a robber who robs Sam King's bank with Syd and kidnaps Carter and Frankie Hughes when they spot his face as well as Syd's. However, his plans were foiled by Benji.

He was portrayed by Angus Sampson, who also played Jutt in Legend of the Guardians: The Owls of Ga'Hoole, Bear Gerhardt in Fargo and the Organic Mechanic in Mad Max: Fury Road.

When Carter and Frankie return to King's pawn shop to get their father's watch back, King tells them that he has sold the watch in an attempt to get them to leave, but they confront him until they notice the robbers. Syd comes up by them and taunts them about threatening to call the police. Syd orders King to open the safe and he puts everything in the bag. Syd forces the kids outside, while Titus locks King in a closet, but he drops the key. Frankie tries to intervene, but Syd blocks her path. Frankie struggles to break free and accidentally removes Syd's mask, revealing his face. He then forces them into the van and Titus arrives, confused. Syd takes off his mask as well and they lock the kids in the van. As they prepare to drive away, Benji arrives and barks at them. They flee the scene, while Benji chases them. The children's mother, Whitney calls them, but Titus throws it out of the window. They manage to lose Benji, but the children leave a trail of strawberries for him and he continues following them. Frankie insults Titus by calling him ugly, but he takes the strawberry bag away from them and threatens them to never call him ugly again. They arrive at an abandoned house near a cemetery.

They tie up the kids and cover the van. Titus is confused about why they kidnapped the children, but Syd argues with him about not having money. Carter asks them for a blanket for Frankie, but they are unconcerned. Syd then notices the watch with the money and Frankie demands him to give it back. He then sadistically taunts them with it as Carter cries and Titus carelessly throws the blanket at Frankie.

Meanwhile, Benji arrives at the house, but is confronted by their guard dog, Rott, who chases him throughout the yard. Syd orders Titus to deal with the matter and he heads out and Benji manages to trap Rott under a tube. As Rott continues barking at him, Titus comes out and chases Benji into a shed, but Benji escapes and pushes a stack of cabinets against the door, trapping him. Syd comes out wielding a crowbar and chases Benji into a derelict school bus. Syd manages to get in, but realizes that Benji escaped through an opening. As Benji tries to untie the kids, Syd manages to break out of the bus and he and Rott search the house. They manage to find Benji and corner him, but Benji manages to escape through a window and flee the property to get help.

Benji arrives at the pawn shop and manages to free King. He calls the police and Whitney and Benji leads them to the house. Benji tries to show them the traces of the robbers, but detective Lyle Burton doesn't understand and calls off the mission. Benji tries to show the evidence to Whitney, but she furiously disowns him for leading them on a seemingly pointless chase. The next day, Benji gets Mongrel to help him rescue the children with her keen sense of smell and discover a basement with many transport tunnels. While the robbers and the kids are traveling through the tunnel, the kids complain about going any further, but Syd orders them to continue moving. Titus asks Syd about coming with him to escape New Orleans, but Syd doesn't understand him and instead insists on moving along. Syd then notices the kids leaving a trail for Benji and he and Rott confront him. Syd brushes off the trail and he orders Titus to come along as he reluctantly follows him. However, Benji and Mongrel come by and Mongrel catches the scent as they continue to follow the trail. The boat arrives and they leave as Titus orders Rott to guard the kids.

Meanwhile, Lyle and Whitney decide to come back to the house and discover the transport tunnels in the basement. Lyle comes up with a plan to cut them off and they head to the boatyard. Benji and Mongrel arrive at the boatyard and find Rott guarding the kids. Rott chases Benji, but he manages to defeat him and Mongrel subdues him, while Benji heads out to look for the children. The Cajun Captain hands Titus some money and Frankie tells him that he's not like Syd. Titus then makes up his mind to keep the money, so he doesn't have to be bossed around by Syd anymore.

Lyle and Whitney arrive at the boatyard and ask Syd about the children, but he denies it. Benji hears the kids calling for help and heads to the boat. Whitney follows him and Syd flees as Lyle chases after him. Titus tries to leave the boat, but the Captain hears sirens and drives the boat in an attempt to escape. However, they forgot to untie the rope attached to the dock and they fall over. Rott confronts Syd for his abuse and Mongrel corners him, allowing Lyle to apprehend him. Benji arrives and tries to cross the rope, but Titus notices a spear and tries to kill him. Titus asks Benji if he ever quits and Benji responds with a growl. Titus charges at Benji and he leaps onto Titus. Titus falls into the water, but not before he nearly kills Benji. Carter knocks the Captain out with a fire extinguisher and they are reunited with Whitney. Benji recovers and the family and Lyle rejoice. Titus is eventually arrested and forced into the car with Syd. 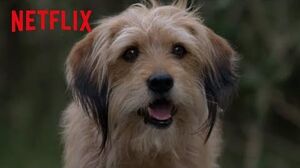