Steal eggs from other animals to eat

Catch Toto and his friends to feed (failed).

Seek food and survive their misery.

Comedic Dimwits
Tlacua & Cuache are recurring antagonists (or sometimes anti-hero) from mexican franchise Una Pelicula de Huevos. are two opossums living in the city's sewer system; And are a parody of American stereotypes on northern Mexicans. The two often argue over "crossing the river to get a better life" (In regards crossing the sewer's "river") or about whether they should just follow destiny or actually work for food.

He has bad temper. In reality, all he wants is to find his daily food. He has no greater aspiration and therefore does not have as much malice as he would like to appear. It's sarcastic and ironic. He is patient with his friend and compadre Cuache.

He is very innocent and well intentioned. He is a companion and compadre of Tlacua. Absolutely naive, always following the orders of his partner. Equally hungry, he always dreams of having food fall from the sky without making the slightest effort.

They like to eat eggs and bacon, and try to eat Toto, Willy and Tocino, but are fooled easily due to their incompetence. While Tlacua is quick tempered, Cuache is very easygoing. They call each other "compadre", seeing that Toto, Willy and Bacon were sailing through the lunchbox in the sewers, quickly caught them to fry them in a sart and then eat them, but realizing that they managed to escape. Due to the ineptitude of Cuache, followed them through all the pipes until they arrived to a small exhaust pipe, which Tlacua would be stuck.

Later in the final scenes of the movie, after discussing about their famine, they fall from the sky to the evil rattlesnake egg, in which they try to catch him but this bites the hand to Cuache.

Being placed in a desert, they appear the two tlacuaches with the intention to rob to the roadrunner several of their eggs to devour them. Then by orders of Tlacua, a stone is sent by Cuache to him (make enter in panic), once they do this, they run in slow camera towards in the nest, but unfortunately they are run over by a truck that was being driven by Willy and the others, clutched in the front of the vehicle. Until the truck went to a lot of cactus, leaving behind badly the two tlacuaches.

To finish the credits of the film, it shows to Tlacua tired along with his buddy, lost in the desert without direction. Suddenly, the Egg Witch fell flying to crash next to Cuache, who ate it believing it was an egg (without knowing that in reality was a stone).

Again the two tlacuaches appear walking along the road in search of a new opportunity to feed on chickens, on the way they were about to be hit by a motorcycle, driven by Confi.

Hours chasing the motorcycle, it returns in the opposite direction and Tlacua tears the tail, disorienting without knowing how to handle without it.

In the zeebo game console, Tlacua and Cuache are one of the bosses that must be defeated, when arriving to the phase of the sewers, with the company of Cuache's young nephew (which is only a common enemy).

Tlacua and Cuache make a cameo appearance as one of the animals zapped frozen by the guns fired by the Marcianos in the montage scene in which the Reyes are flown into the USA by the General. 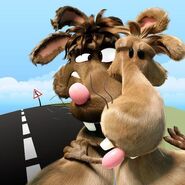 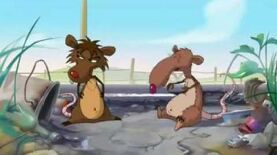 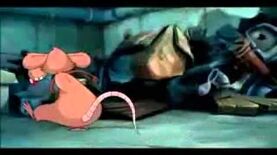 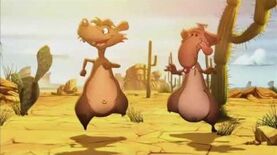 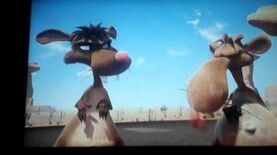 Tlacua y cuache
Add a photo to this gallery
Retrieved from "https://villains.fandom.com/wiki/Tlacua_%26_Cuache?oldid=3460760"
Community content is available under CC-BY-SA unless otherwise noted.