Amphibian robot
Toad Man is one of the eight robot masters introduced in Mega Man 4. As his name suggest, his design is based off a toad. He was created by Dr. Cossack to irrigate crops during droughts. However, when Toad Man forced Dr. Cossack to work for him after kidnapping his daughter Kalinka, Toad Man was modified for combat.

He special weapon is the Rain Flush, which is a capsule full of powerful acid. The capsule will shoot up into the sky upon being fired and will then release a rain of the powerful acid which cannot be avoided. Also, Toad Man is able to jump very high and can hop from great distances. If he is attack before he used his move, however, he won't be able to use his Rain Flush. If this tactic is exploited, he becomes one of the easiest robot master in the franchise to defeat. His weakness is the Drill Bomb and his defeat grants Mega Man the Rain Flush

Toad Man appears as one of the initial four robot masters in Mega Man IV. He's stationed at a water sewage plant for this game. 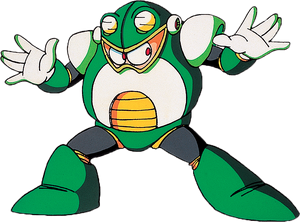 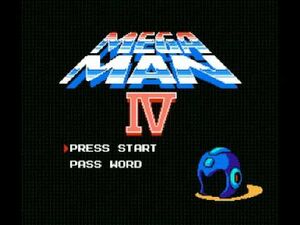