Minions
Toadies are Kamek's underlings which have several different classes and the secondary antagonists of the Yoshi's Island series. Toadies usually travel in a four-man team and possess propellers on their heads that enable them to fly. They have appeared in almost every Yoshi spinoff to date. These are generally red in color and do not appear unless Baby Mario has been in his bubble for too long in the Yoshi's Island games.

The Toadies made their debut in this game as servants of Kamek, and they attempt to abduct Baby Mario from Yoshi if the green dinosaur allows him to float free for too long.

The Toadies once again follow orders from Kamek and they carry Yoshis off to Bowser's Castle when they are defeated in fights. Toadies are seen in the ending of the game where they help out Baby Bowser after he is defeated by one of the newborn Yoshis to escape by carrying him out of the castle.

Yoshi must stop Toadies from stealing Baby Luigi by throwing eggs at them before the time runs out. The team of Toadies carry Baby Luigi, shielded by a group of many purple Toadies who can each take one hit.

The Toadies reprise their role as Kamek's assistance, aiding him after traveling back in time. Toadies meanwhile kidnap babies from all over the Mushroom Kingdom, including Baby Mario and Baby Peach. However, the latter two's captors lose their infant captives when they are attacked by a Stork, who saves babies Mario and Peach from being kidnapped. Toadies also appear in the mini-game Scratch and Match, which is featured as a bonus challenge.

The Toadies are again assisting Kamek and helping him kidnap Baby Luigi and the Stork in the game's introduction. While they do not appear as regular enemies, they appear when Baby Mario is separated from Yoshi for too long and take the baby to Baby Bowser's Castle. When this happens Yoshi loses a life.

There is also a pink Toadie that steals Baby Mario when Yoshi is attacked. Pink ones are like Solo Toadies in that they do not report to Kamek directly.

These are green or pink in color and when they steal Baby Mario do not directly report to Kamek. These variants travel singularly and while neither pink nor green solos will attempt to kidnap Baby Mario outright, they will try to separate him from Yoshi long enough for Kamek's Toadies to do the actual dirty deed by hovering around with Baby Mario, making it difficult for Yoshi to get him back: green Solos are able to swipe Baby Mario if he falls off Yoshi's back, and pink Solos are able to swoop in and seize Baby Mario immediately after he is dislodged from Yoshi.

Toadies are referred to or have made sporadic appearances in Mario Party franchise but have small roles and have not played big roles.

In this game, Toadies appear as the Kamek Krew; a band of rappers consisting of five Toadies who live on the Mushroom Condo's second floor. True to their occupation as singers and musicians, they use instruments such as guitars and keyboards during their performance. Bullet Bill, an owner and a manager of Mushroom Stadium, is a huge fan of theirs. The ending credits reveal that their gig at the Stadium was a huge success.

Toadies appear as Kamek's assistants in the Club Nintendo comic Mario in Mariozilla. They help him invade Mario's garden, but when his plan to shrink Mario fails, they flee. The Toadies are later seen during a confrontation between Mario and Kamek, supporting Magikoopa. After both Kamek and Mario get shrunk by the abilities of Magikoopa's broom, some Toadies cooperate with Dr. Light (from the Mega Man franchise) and Princess Toadstool in order to revert their master to original form.

Toadies appear as a support spirit that increases the fighter's tosses and meteor smashes. Their Spirit Battle is against four Squirtle equipped with Rocket Belts that have increased power to their throws. 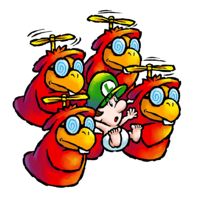 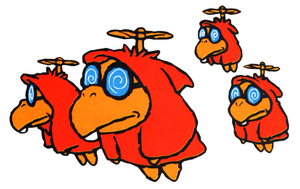