Beating people to death with his bare hands and leaving coins on their corpses.

Tobias Church, going under the alias Charon, is a major antagonist in the first half of the fifth season of Arrow.

He is portrayed by Chad L. Coleman.

Tobias Church is a crime lord who has come to Star City after the death of Damien Darhk. When corrupt SCPD officers attack one of his money laundrys, intending to fake an attack from another gang in order to steal the money, they are stopped when Church and more of his henchmen step out of the shadows. The leader of the policemen grows arrogant so Church beats him to death, resulting in the other two policemen dropping their guns and surrendering. When the police arrive, they find coins on the eyes on Church's victims.

To make his appearance known to the city, Church plans to take down 'the biggest guy' in the city, the Green Arrow. To his men, he reveals that the Green Arrow is unlikely to reveal himself to him, so they need some kind of bait. In order to lure him in, they attack a ceremony in which the recently deceased Laurel Lance is honored and kidnap mayor Oliver Queen, unaware that Queen and the Green Arrow are the same person. Oliver and three other hostages from the ceremony are brought to Church. While there, Oliver talks to Church and attempt to make a deal with him. Church denies however, revealing that he has a plan. When Queen insults Church, calling him planless and stupid, Church orders him to be brought away to be taught 'some manners'. However, while in a seperate room Oliver frees himself and kills the man guarding him. Church later reveals an adress to the SCPD, hoping that the Green Arrow would get the message and arrive there.

Although Oliver escapes, he is unable to save the other three hostages as well. He plans to return to save them from Church. With a special police force, Green Arrow storms the warehouse. While the policemen take care of Church's men, Church is engaged by Green Arrow. Church escapes after being defeated by Oliver but one of the officers realises that the entire building is rigged with explosives. The policemen and Arrow are able to escapejust tin time and Oliver even manages to attach a rope arrow to Church's escape helicopter. He gets up to the helicopter and attacks Church but is thrown out by Church who escapes.

That night, Church assembles a meeting with the crime lords of Star City. He reveals to them that they need to unite their forces to defeat the Green Arrow and that he will lead their alliance. When the leader of the Bertinelli crime family speaks up, Church reveals that he has infiltrated all their crime empires, proving this by having Bertinelli killed by one of his own men.

Church later strikes a deal with Janet Carroll, the CEO of Amertek, who sells him a large amount of weapons for 100 million dollars. The deal, however, is disturbed by the vigilante known as Ragman. Ragman attacks Carroll and one of Church's henchmen attempts to shoot him, however, Church stops him from helping Carroll as her death would save him his money. Church is then attacked by Green Arrow and manages to overpower him. Church grabs one of Oliver's arrows and attempts to ram it into Oliver's head but is stopped by Ragman who grabs him and hurls him into one of Church's cars.

A few days later, Church and his gang attack a police lockup, seemingly intending to destroy evidence which could get one of his main associates into prison. However, the evidence is revealed to be a bomb and Church and his gang storm the building once the bomb has gone off. The gangsters steal advanced weaponry from the precinct and then leave, destroying more evidence with grenades. With his new weapons, Church launches an attack on the building where his second-in-command is held. They are opposed by Oliver's sidekicks and Curtis is severely injured. Church then takes on Wild Dog while Artemis and Ragman bring Curtis to safety. Chuch viciously beats up Wild Dog but keeps him alive, claiming that he may yet have his uses. When he and his men leave the building, they take Wild Dog with them. In one of his hideouts, Church promises Wild Dog that he will break Wild Dog's spirit and then starts torturing him.

Church brutally tortures Wild Dog for twenty hours. Meanwhile, Oliver and his team desperately try to find their accomplice. Some time later, Church brings Ramirez outside and forces him to dig his own grave. While Ramirez does so, the gang is attacked by Oliver who takes out all of Chuch's men. While Oliver fights, Church drives off in a car. Oliver is surprised that Church did not put up a fight until Rene reveals that he broke under Church's torture and told Church that Oliver is the Green Arrow.

Church drives back through his turf, calling one of his men and telling him to prepare everything. The man asks whether the Green Arrow will be a problem but Church replies that the Green Arrow will be dead before their plan can start. When he exits the car, Church is greeted by Prometheus who berates him for kidnapping one of Oliver's protegees, thus going against Prometheus' order of staying away from the Green Arrow. Prometheus tells Church that he should consider this his second warning and stresses that there will not be a third. Church then sends Scimitar, a hired killer, to kill Oliver Queen.

After Scimitar has seemingly killed Queen, Church goes through with his plan. However, while meeting another crime lord on a private landing field, Oliver and his team attack. Church sends his assassin Scimitar to deal with them. He attempts to flee but is confronted by Wild Dog. The two fight each other but are both thrown off their feet when one of Church's henchmen fires a rocket launcher. Church escapes in the chaos and flees into a hangar where he is confronted by the Green Arrow. Although surprised that Oliver is still alive, he swiftly attacks him. Oliver easily defeats him and disarms him. Without his knuckle dusters, Church seems to accept his surrender. Moments before he is knocked out by Oliver, Church mockingly tells him about Prometheus and his hate for the Green Arrow.

Church is arrested by the SCPD and transfered to Iron Heights. During the transfer, Church is visibly nervous and tells the officer guarding him that they should have flown him to Iron Heights instead. Moments later, the convoy is attacked by Prometheus. After murdering every policeman guarding the convoy, Prometheus opens the door to the truck that holds Church. Church tries to bargain for his life, even telling Prometheus that the Green Arrow is Oliver Queen, but Prometheus kills him nonetheless by hurling a blade into his throat.

Church always carried himself in an intimidating gravitas, constantly proving his dominion over others through violence and ruthlessness. Because of his charisma and intelligence, Church often suited himself a leader and his tendency for brutality assured he would not be questioned as various other crime lords beneath him were all afraid of incurring his wrath. He gained respect by killing the most respected or feared head of a group, in Starling City's case; the Green Arrow. Despite his thuggish nature, Church showed intelligence by uniting the Starling City gangs to kill the Green Arrow, arguably the biggest threat to his empire yet he was not so sure of himself that he believed that they would listen to him without question so he cleverly implanted informants in their group to coerce them to obey him.

His confidence in himself seems to never waver. However, a part of him was afraid of Prometheus. This was seen when they first encountered one another, firstly thinking that Prometheus was Green Arrow, Church greeted him in a casual and confident tone but this breaks when he is struck by a weapon and pinned down, allowing his fear to show. His paranoia begins to show after this by hiring a professional assassin as a bodyguard to defend him although he makes it clear when meeting Prometheus a second time that he refuses to listen to his orders. When defeated by Green Arrow, Church seemed consent enough to go to jail because he knew Prometheus would be able to kill him. During his prison transfer, Church did not even try to hide his anxiety and he was unquestionably scared when he heard Prometheus kill the guards outside one by one. However, he had enough courage to bargain for his life with Green Arrow's identity with Prometheus although it was ultimately unsuccessful.

In his final moments, Church showed some degree of humanity before he was murdered, as he did his best to stop the guard from going outside so Prometheus would not kill him. 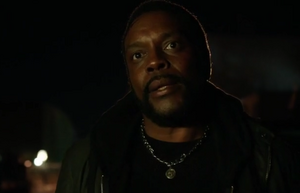 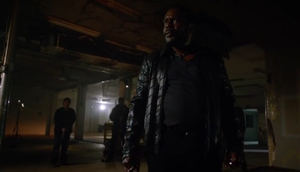 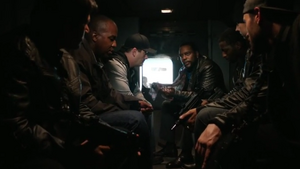 Church and his men on their way to the ceremony. 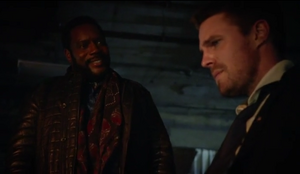 Church with a captured Oliver Queen. 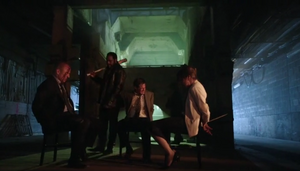 Church toying with his hostages.. 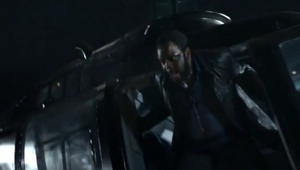 Church escaping in a helicopter. 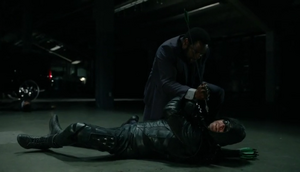 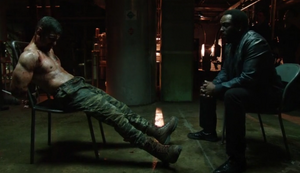 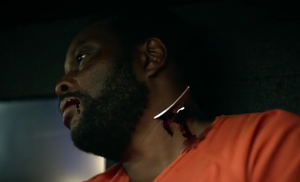