Priest of the Holy Mother Sect of The Order

Preaching the doctrine of The Order

To build his own sect within The Order cult.

Toby Archbolt also known as Victim 14 was a priest of the Holy Mother sect of The Order, which operated the Wish House and a minor antagonist appearing in Silent Hill 4: The Room.

He is the fourteenth of the chosen victims of the killer Walter Sullivan as part of the 21 Sacraments.

After the deaths of Jimmy Stone and George Rosten, and the subsequent weakening of the Valtiel Sect, Father Archbolt tried to increase the influence of his own sect within the Order. In doing so, he began doing illegal dealings such as selling marijuana, in order to increase his own sect's influence. He started a sightseeing business with his group in one of his ventures. He once opened another Wish House orphanage and later elected to city council in a city somewhere in Mexico for his contributions to the city and the people.

During a trip to Mexico, Walter Sullivan pushed Toby off of a cliff, making him the only victim in the series to be killed outside of the United States. Like every victim in the game, Archibolt left an item behind that acts as a piece of his memory in Walter's Otherworlds, which is an old picture book found in the area he was murdered.

Even known about Father Archbolt, even to his fellow members of the Order and Walter Sullivan that not only he was greedy and a bit power-driven, but he also likes underaged girls which made him a pedophile and sealed his fate.

Archbolt later return as a lost soul of his former self with a visible injury on his head (which implies he died by cranial trauma) that became one of the ghosts whom Henry Townshend encounter before facing their murderer Walter. 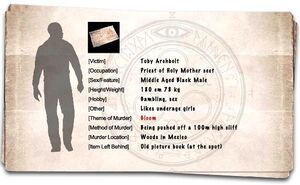 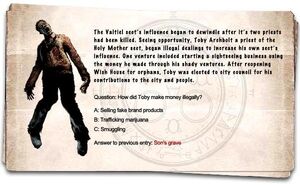 Another bio of Toby Archbolt, now reborn as a ghost.