Kill all of the Silver-Eyed Warriors

Tock is a posthumous antagonist from the American animated webseries RWBY. She is an assassin and member of Salem's Faction who is tasked with killing or incapacitating all of the Silver-Eyed Warriors in Remnant.

She was voiced by Ruth Urquhart.

While most of her past is unknown, Tock was always known as a thrill-seeker and sadist. Not content with her reptilian scales being her only Faunus trait, she sharpened her teeth and covered them in metal to provide herself with an intimidating grin. She and her group were later hired by Salem to kill all of the Silver-Eyed Warriors that could pose a threat to the Grimm forces throughout Remnant.

Eventually, Tock and her group happened upon a young Maria Calavera, who used her Silver Eye power to kill a Nevermore, and proceed to attack her. While Maria easily handles the others, she struggles against Tock's speed and swordsmanship. Tock relentlessly attacks her, eventually knocking her down and depleting her Aura. Maria gets back up and fights back, and the two's weapons collide. However, Tock uses her teeth and jaws to bite through Maria's defense and headbutt her, breaking her mask and leaving her vulnerable. With a single swing of her sword, Tock violently cuts out Maria's eyes.

Tock proceeds to mock Maria and dodge her attempts to fight back. As she stands over Maria and prepares to kill her, Maria summons one of her scythe blades to stab Tock in the back. As Tock falls, Maria uses her other blade to decapitate and kill her.

Tock appears as a unit in RWBY: Amity Arena. She is invincible for two seconds upon deployment, then acts as a ground melee unit that does ten hits with one attack.

Being a crocodile Faunus, Tock has extremely powerful jaws complemented by a set of razor-sharp and durable teeth that can bite through wood and metal. She is also a skilled fighter and utilizes acrobatics and her fast swordsmanship in combat, duel-wielding cutlass-like swords. Tock also possesses an Aura, an extension of her soul that acts as a shield to soften blows. Unlike most Auras, Tock's is incredibly powerful, making her invulnerable while it is active; however, she can only have her Aura active for one minute. Tock's Semblance allows her to toggle her Aura on and off for that one minute, which she carries a stopwatch to help her time. 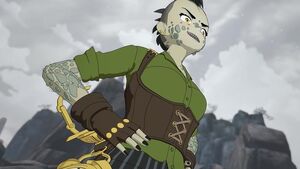 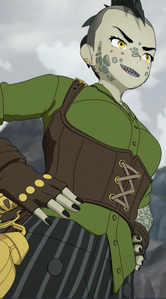 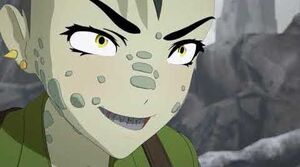 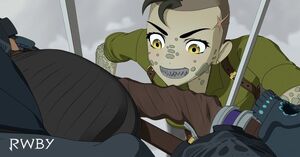 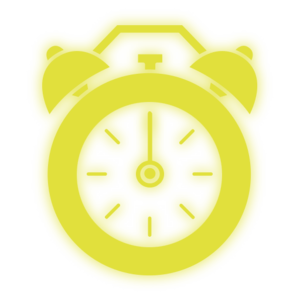 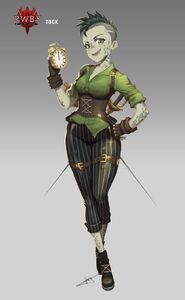 Tock as she appears in RWBY: Amity Arena. 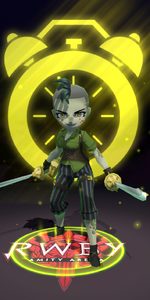