Do anything to get on Jack's good side.

Get involved with Lydia.
Torture Jesse emotionally and mentally (all failed).

Todd Alquist is an exterminator for Vamonos Pest, a fumigation company used by Walt, Mike, and Jesse as the front to their meth business after Gus Fring's death. He is the secondary antagonist of the fifth and final season of Breaking Bad.

He was portrayed by Jesse Plemons, who also played Robert Daly in the "USS Callister" episode of Netflix's anthology series Black Mirror.

Todd and the other Vamonos employees are burglars, gathering information and selling it to outside parties from the houses they tent, though this practice stops once they conceal the meth operation. Todd notices and disables a nanny cam at Walt and Jesse's first cook site, attracting their attention.

He is later used as an accomplice in the heist of methylamine from a freight train. The heist is successful, though Todd shoots and kills a young boy named Drew Sharp, who stumbled upon the crime. Todd does not show much remorse about the murder; he explains to Jesse that "shit happens" and keeps the boy's tarantula as a trophy. The team reluctantly keeps Todd employed after he explains his actions: there could be no witnesses, and his uncle, Jack, could be valuable to the operation.

After Jesse and Mike exit the business, Todd becomes Walt's partner in the cooking process. Todd helps Walt dispose of Mike's car and body after Walt murders Mike, and Todd uses his uncle's prison connections to help Walt eliminate Gus Fring's nine former employees and their lawyer who were imprisoned.

With no one opposing them, Walt and Todd partner with another meth distributor, Declan, and Madrigal Electromotive executive Lydia Rodarte-Quayle to run a highly profitable meth empire for months across the American Southwest and overseas in the Czech Republic, until Walt bows out of the business. It is implied that Todd acted as the main cook for Declan, but was said to have caused a fire in the lab which makes Declan hire a cook of his own. This move causes the purity of Lydia's product to fall to an unacceptable 68%, prompting her to (unsuccessfully) try to bring Walt back into the business and ultimately to hire Todd, his uncle, and the Aryan Brotherhood to massacre Declan and his men, in order to reinstate Todd as the primary cook. They then take the methylamine from Declan's lab and return to New Mexico.

When Todd makes his first independent cook, although the quality has improved, the colour of the Methamphetamine is no longer the signature blue expected of the 'Heisenberg' brand meth which disappoints Lydia. As a result Todd vows improve his cook in order to match up to the standards expected of their product. Conveniently, Todd is shortly afterwards contacted by Walt, who informs him that he may have another job for him and his Uncle Jack, it is then revealed that Walt wants Jesse Pinkman killed. After Todd arranges a meeting at his Uncle's gang's headquarters, Walt and Jack go over the details of the upcoming hit to be carried out on Pinkman, including the form of payment. After rejecting Walt's offer of money, Jack insists that he will carry out the hit on the condition that Walt cook for them, in order to teach his nephew Todd how to perfect the intended blue shade to the Methamphetamine. Reluctantly Walt agrees, asserting that he will do a single cook with Todd to help him get the formula right.

Following this, Walt is duped into driving into the desert to a location where he stashed the $80,000,000 he had made from his meth career, after his former partner Jesse informs him that he has found the money, and is going to destroy it as revenge for Walt's part in the poisoning of Brock, a child close to Jesse. However it turns out that this was a setup by Jesse in order to lure him out into the open. Panicked by this Walt calls Todd's Uncle Jack for help, only to call off the hit when it is revealed that Jesse is accompanied by Walt's DEA brother in law-Hank Schrader, and his partner Steve Gomez. Regardless Todd, his uncle and the rest of his Aryan Brotherhood gang arrive at the scene heavily armed, which results in a shootout between the gang and the two DEA agents. The outcome is a foregone conclusion, with both DEA agents being gunned down by the numerically superior and more heavily armed Brotherhood gang. Hank is wounded whereas Gomez has died during the fighting, he is soon executed by Jack however, who sees no possible outcome in which he could be allowed to live despite Walt's protests.

Before their departure, Jacks gang decide to take Walt's money, however Jack decides to leave Walt with a single barrel of the money, and informs him that due to the high esteem that his nephew Todd holds Walt in as his former employer, he isn't going to kill him or leave him with nothing. During this moment, Walt who is eager for retribution on Jesse, points out that he is hiding under a nearby car (Jesse was previously thought to have escaped during the ambush.) Jack prepares to execute Jesse, only to be stopped by Todd, who volunteers to torture Jesse in order to gain any information about anyone else who might be aware of their criminal operation. Satisfied with this, Walt allows Todd and his Uncles gang take Jesse with them.

Sometime after this, back at the gangs hideout, is revealed that Todd has heavily beaten Jesse, who is kept chained up in a cell built into the ground. During this scene, Todd removes Jesse from his cell and leads him into his lab where he chains him to a wire on a rack, he then tells Jesse to cook, revealing that he is using Jesse to help him get the meth formula right. In order to motivate Jesse besides torturing him, Todd has pinned up a photo of Jesse's former love interest, Andrea and her son Brock, showing Jesse that if he does not comply, then they will suffer the consequences.

After Walter White goes into hiding because of the nation wide manhunt that has been placed on him, Todd, Jack and several other of Neo-Nazi gang pay a visit to the White residence. Todd threatens Skylar and her tow children, Walt Jr. and Holly, warning her not to speak to the police of their involvement in Walt's drug empire or to mention Lydia's name.Shortly after this Jesse attempts to escape from the gang's compound but is caught. As a lesson and future incentive, Todd executes Andrea in front of Jesse and threatens to do the same to young son Brock should he not cooperate with them, this effectively breaks Jesse and turns him into their personal meth cooking slave.

Soon after Todd sets up another meeting with Lydia for a progress report and partly because of his fascination with her. However Walt interrupts their meeting in order to set up a face to face business deal with Todd's uncle Jack. Lydia quickly agrees to Walt's proposition, despite Todd's reservations about working with him again. As Walt walks away from their table Lydia explains to Todd that they are to murder Walt at this meeting to ensure his silence about their involvement in the Meth trade. Later Todd is present in the Neo-Nazi clubhouse when Walt drives in to meet with Jack. Todd watches as his Uncle reveals that they had no intention of dealing with Walt and plan on executing him. Walt manages to delay his own murder by accusing Jack of cheating him by partnering up with Jesse Pinkman instead of killing him. Jack orders Todd to bring Jesse into the clubhouse so he can show him how broken Jesse has become, despite Todd's reluctance he brings Jesse in. Walt then tackles Jesse to the floor and as Todd goes to pull him off, Walt activates the remote controlled M60 machine gun in the trunk of his car, which begins firing and kills all of the gang, except Todd and Jack, who is mortally wounded in the shooting. After the gun stops firing Todd looks out the window in total shock of what just took place, however before he can act Jesse wraps the chains binding his wrists around Todd's neck and proceeds to strangle him so hard that his neck snaps, finally killing Todd and avenging the deaths of Andrea and Drew Sharp.

Despite being polite and having a strong eagerness to please his employers, Todd is a ruthless killer when it comes to disposing of those who he feels may threaten the security of his criminal career, most notably demonstrated by the fact he killed a child after he witnessed him and his employers rob a train of its Methylamine. When it comes to carrying out commands or doing what he feels is necessary in the name of business, Todd will perform these actions without hesitation or remorse.

He tends to hold those who employ him, such as Walter White in high regard and will show visible respect as well as loyalty to them as such. His dedication is shown when during his first cook with Walt, he turns down payment, remarking that he only wanted to be payed when he achieved the standards that he felt was expected of Walt's product. After Walter's borther-in-law, Hank, was killed by his uncle, Todd gave his sincere condolences to Walt.

His attitude towards his Uncle seems to be more relaxed, with him being somewhat less Approbative around them. However he still demonstrates his characterized desire to impress them with his abilities, implying that Todd's key motivation is approval and praise from his superiors, giving him a high sense of self worth as apposed to pure and simple greed. 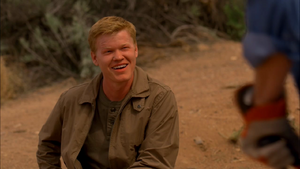 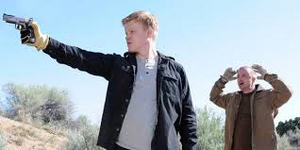 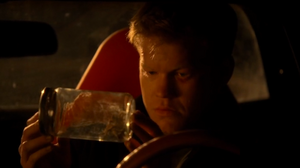 Todd and his souvenir following his murder of Drew Sharp 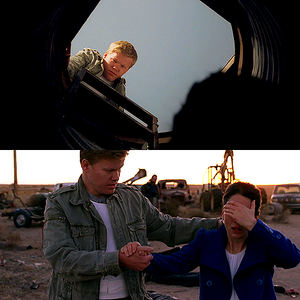 Retrieved from "https://villains.fandom.com/wiki/Todd_Alquist?oldid=3333175"
Community content is available under CC-BY-SA unless otherwise noted.