Bass player of "The Clash at Demonhead"

Member of the League of Evil Exes.

Mind-reading
Levitation
Musical skills (all gained through his vegan diet)

Cheating on his actual girlfriend and vegan diet.

Todd Ingram is a major antagonist in the graphic novel Scott Pilgrim and it's movie and videogame adaptations Scott Pilgrim vs. the World. He is Ramona Flowers' third ex-boyfriend, a psychic that gained his powers through a strict vegan diet, and a member of the League of Evil Exes.

In the movie, he was portrayed by Brandon Routh, who also played Daniel Shaw in Chuck and a possessed Ray Palmer in DC's Legends of Tomorrow.

Todd started to date Ramona during high school, but he dissapeared during that time. He began a rigid vegan diet and gained psychic powers, then came back and took Ramona out of class to show her how big his love was by blasting a crater on the moon. However, Todd was forced to attend a vegan college and Ramona had to go to another one, so they decided to quit their relationship. Sometime later, he met Scott Pilgrim's ex-girlfriend Envy Adams and began dating her, soon becoming the bass player for her band called "The Clash at Demonhead". However, he also started to secretly cheat on Envy with the band's drummer Lynette Guycott.

In the comics, he meets Scott when he and the Sex Bob-omb attend a show of the Clash at Demonhead and Envy calls them into the backstage area. His grudge with Envy causes him to attack Todd, who uses his powers to throw him into an alley, but the lateness of the hour has Envy calling the fight off till the next day. They meet again at a store called "Honest Ed's" where Envy sets a race between both, with Todd forbidden to use his powers. However, the shop's frantic nature causes Todd to accidentaly implode the place, causing Envy to cancel the fight. One day later, they are having dinner at a restaurant when Todd orders a gelato as dessert, all of them unaware that it's actually made of eggs and milk. Later, at another club they were to perform, Envy finally discovers his cheating when he leaves a restroom with Lynette's panties on his head during Envy's fight with Ramona. She knees him in the groin and leaves in disgust, but the fight resumes when Scott, aided by the band "Crash and the Boys" (renamed "The Boys!! and Crash!"), attacks him with everything they have, but even the Boys aren't enough to defeat him. Luckily the Vegan Police shows up and takes Todd's powers away due to his infractions (eating the gelato and a chicken parmesan), allowing Scott to give him a final headbutt, causing Todd to blow up in coins and an extra life.

In the movie, the fight at the backstage area is the only battle they make. There is no "Crash and the Boys" to help Scott (as they were incinerated by Matthew Patel), and it's also Todd who punches Knives Chau's highlights out of her hair instead of Lynette. Also, his infidelity with Envy never happened. He merely throws Scott away like a ragdoll with his powers, and even beats him in a bass battle. However, when Scott is thrown into a coffee machine, he tricks Todd into driking a half and half cup with average milk instead of soy milk by thinking hard into pouring the milk in another one. This causes the Vegan Police to crash into the scene and hold Todd into "gunpoint". When he asks about his "three strikes", they point out the gelato and the chicken parmesan and then finally took his powers out, allowing Scott to headbutt him and causing him to blow up in 3000 points and coins, much to Envy's grief.

After his defeat (in all adaptions), he respawns back at his home, having learned his lesson.

Todd is the boss of World 3 after fighting Envy and Lynette. His attacks involve throwing garbage cans towards the player, psychic blasts, choking them and a major attack where he turns his arm into a mishsmash of vegetables then firing it at the players. But after the attack is done, the Vegan Police appears and stuns him for a moment, giving the player ample opportunity to attack him. When defeated, he explodes into a bunch of vegetables and leaves behind $15.95 and an Extra Life.

Despite being threatening and rude, Todd is a bit more of a dimwit with limited intelligence, but yet, his fighting skills are dangerous and powerful. He can also be cocky and use his fame to his advantage (pass through crowds and freely punch Knives). His psychic powers are all "vegan-based", depending on his diet to keep them on. He also uses his powers when playing bass to create explosions and shockwaves to defeat his enemies. 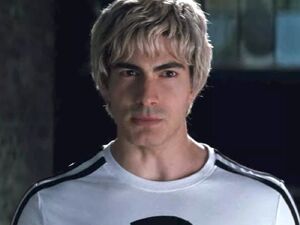 Todd in the video game.