Get back at Dwight and Jim for trying to get him fired. (failed)

laced the cupcakes and give them to the Scranton branch. (succeeded)

Todd Finch Packer is a recurring antagonist from the American version of The Office. He was a traveling salesman for Dunder Mifflin Scranton branch and former friend of Michael Scott.

He was portrayed by David Koechner.

For a majority of the series, Packer is the traveling salesman for the Dunder-Mifflin Scranton branch. Packer is rarelly seen at the Scranton branch, but he will occasionally visit to cause mischief. Prior to becoming a traveling salesman, Packer worked as a salesman in Scranton, sitting next to Michael Scott, occupying the desk most often inhabited by Dwight Schrute.

Unlike many, if not all, of the Scranton employees, Packer has no redeeming qualities to his eccentricity. He is very vile, often seen as a bullying, sexist, misogynistic, womanizing, homophobic character, with zero regard for who he hurts.

Packer is shown to be the best friend of protagonist Michael Scott, who describes him as his "BFF". However, the friendship is often very one-sided, as Packer often treats Michael merely as a lackey, or even a victim, in his schemes. It does, however, seem like Michael is the one person Packer has a genuine likeness for, as he does try to offer Michael legitimate help, and even stars in his movie.

With the exception of Michael, and sometimes Kevin Malone and Meredith Palmer, Packer is despised by everyone in the office. Jim Halpert also has a particular dislike of him, as Packer often targets him for homophobic jokes.

Packer appears in a voice cameo in the first episode of series "Pilot", calling Michael when he is in a meeting with coroporate employee Jan Levinson-Gould. Michael refers to Packer as a "great rep" and is allowed to take the call, but he instantly regrets it when Packer calls Michael a "big queen" and makes suggestive remarks about Jan. Michael hangs up and calls Packers a "horrible person".

Packer makes his first physical appearance in the Season 2 episode "Sexual Harrasment". Packer immediately causes mischief, calling Jim "queer". He also informs Michael that Randall, the company's departed CFO, has resigned because he was sleeping with his secretary, which Packer blames the woman for. After several inappropriate jokes, Packer, who has a DUI, has Ryan Howard drive him around. Packer is later seen encouraging Michael to make his famous "That's what she said" joke, and later makes fun of Phyllis, but Michael comes to her defense.

In "The Carpet", Michael is forced out of his office thanks a mysterious and extremely foul-smelling substance left on the floor. After stewing about the incident all day, even claiming he is the victim of a "hate crime", Packer calls about "the package" he left on the floor of his office, causing Michael to forget all about his anger and claim it was "done out of love". The contents of the "package" are never revealed, but are highly implied to be Packer's own feces. Packer later attends Scranton's Christmas party, arriving with a mistletoe over his groin. He later gets drunk and passes out, and is covered in silly string by the other employees. Michael later lists Packer as his emergency contact in the episode "The Fight".

Packer makes two appearances in Season 3. First in a voice cameo, he speaks with Michael about their respective Christmas vacations, which Pacer spent in Atlanta, remarking "that whole town is whack". He doesn't believe Michael, who says he went to Jamaica with Jan, so Michael sends him a photo featuring himself and a topless Jan. Unfortunately, Michael sends the photo to "packaging@dundermifflin.com" rather than "packer@dundermifflin.com", causing the photo to be sent throughout the company. Packer admits the photo is hot, and asks Michael how he can remove him from the picture. Packer physically appears in the episode "Ben Franklin", greeting Jim by calling him "tall, queer, handsome as ever". He immediately goes to flirt with Karen Filippelli, who introduces herself as Jim's girlfriend. A disbelieving Packer tells her to shut up and declares "either this chick is a dude, or Halpert got scared straight!" before going to socialize with Michael. Packer is annoyed he can't come to a bachelor party Michael is holding during work hours for Bob Vance of Vance Refridgeration, who is marrying Phyllis. He inquires to Michael the type of stripper he ordered, but Michael, unfamiliar with how bachelor parties work, did not order one. Michael is reluctant to do so, but Packer assures him he will be fine if he orders a male stripper for Phyllis' bridal shower, calling it "separate but equal".

Packer returns in Season 6, hoping to have Michael join him for St. Patrick's Day festivities at a local pub. Michael is reluctant, as Sabre CEO Jo Bennett is making the employees stay late. Eventually, Michael is direct with Jo, allowing their dismissal.

In Season 7, Packer attends the Scranton Halloween party, dressing up as a pregnant nun. As Jim tries to discover why new salesman Danny Cordray didn't call Pam back after a date the latter two went on years prior, Packer mockingly asks Jim if he's "looking for someone to bang his wife", which Jim ignores.

Packer appears in Michael's movie "Threat Level Midnight". Michael's character, Agent Michael Scarn, enters a bar and leads the other characters in doing "The Scarn", his trademark dance. Packer appears as a drunk in the bar, declaring "if doing The Scarn is gay, then I'm the biggest queer on Earth!".

Packer takes center stage in the Season 7 episode "Todd Packer". With Michael's recommendation, human resources rep Holly Flax allows him to return as a Scranton-based salesman. He immediately annoys the other employees, continuing with the cruel jokes and taking Dwight's desk. Jim and Dwight join forces and have Packer believe he is being offered a job in Sabre's corporate offices in Tallahassee. Michael overhears this and attempts to tell Packer, but has a change of heart when Packer insults Holly, his fiance. As Packer leaves for Florida, Michael confides to Holly that Packer is "an ass". 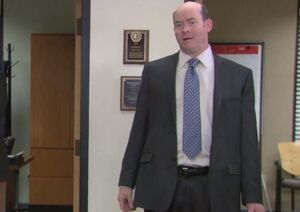 Packer
Add a photo to this gallery

Retrieved from "https://villains.fandom.com/wiki/Todd_Packer?oldid=3255387"
Community content is available under CC-BY-SA unless otherwise noted.