Todd Sweeney is a wealthy kid and a one-shot antagonist in the Nickelodeon animated series My Life as a Teenage Robot. He made his only appearance in the holiday episode "A Robot For All Seasons" as main antagonist. Todd is a spoiled brat with abusive parents who was mad at Santa Claus for never giving him presents every year.

He was voiced by Jason Marsden, who also played Chase Young in Xiaolin Showdown, and Imaginary Gary from The Fairly Oddparents.

To get back at Santa, Todd Sweeney meet Jenny and asked her for help by letting him control her, but in reality he brainwashed her and used her powers to ruin everyone's Christmas for a while. After his control over her wore off, Jenny fell into a "coma" for exactly a year. Not only did his plan work, but despite Jenny's claims she was brainwashed by him she was banished from Tremorton by everyone in town including her own mother and friends. Although, Sheldon was the only one who believed her pleas and helped her on her mission to prove to Santa that she was a "good girl." In the end, he soon learned the true meaning of Christmas and thus he was transformed into a loving, caring boy. 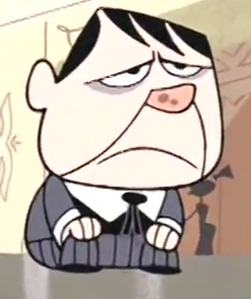