Avenge the death of the Nightrider by killing Max Rockatansky (failed).

Toecutter's Gang is the main antagonistic faction in the post-apocalyptic 1979 film Mad Max. They are led by Toecutter. This gang consists of about 13 members (one honorary).

In Mad Max, they are first seen when they ride roughshod into an outback town to collect Nightrider's corpse who Max killed and cause some ruckus. When their leader Toecutter is almost run over by a couple trying to escape the chaos they chase after them, force the car off the road and it is hinted that they gang-raped both the man and the woman. Johnny The Boy (Toecutter's Protege) gets stoned and is left behind at the crime scene. Max and his partner Jim Goose arrest Johnny but are forced to release him without charge due to the lack of evidence and witnesses much to Goose' chagrin. The gang later hunt down and burn Jim Goose alive as he is taking his damaged bike back to a repair garage. Meanwhile, Max and his family take a vacation as suggested by Fifi.

Toecutter's gang later finds and attempts to molest his wife Jessie and infant son Sprog when they go for ice cream. Although Jessie, Max and Sprog escape they are tracked down to a nearby farm owned by a friend of Jessie after the Mechanic ratted them out, Toecutter's gang then try to take Sprog hostage however Jessie's friend May holds them up with a shotgun which buys Jessie some time so she can make an escape, unfortunately, their car breaks down and the gang run down Jessie and Sprog as they are trying to escape on foot. While Jessie survives (the intro of The Road Warrior shows that Max leaving two graves, indicating that Jessie ultimately succumbed to her wounds), Sprog did not.

A grief stricken Max dons his MFP leathers and takes his police interceptor special and forces many of the gang member off a bridge whilst they are stealing fuel from a tanker. Bubba Zanetti is shot point-blank in the stomach with a shotgun by Max, Johnny The Boy flees and Toecutter is killed when he collides with a lorry trying to escape Max. Johnny is chained to a burning car by Max and is given a choice: saw off his limb to escape alive or be incinerated. The car eventually blows up, whether or not Johnny escaped by hacking off his own tied limb or failed and burnt alive is left to audiences' imagination. With that, Toecutter's gang is exterminated. 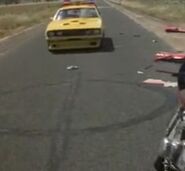 from TC gang to Max 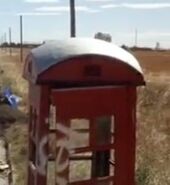 TC gang's mark
Add a photo to this gallery

Retrieved from "https://villains.fandom.com/wiki/Toecutter%27s_Gang?oldid=3688435"
Community content is available under CC-BY-SA unless otherwise noted.