Alien Criminals
Togeno Aves is a sea urchin-themed Gangler Monster and is one of three antagonist the other two were the Smash Brothers named Odordo and Anidara Maximoff in episode 14, but the main antagonist in episode 5 of 2018 TV series called Kaitou Sentai Lupinranger VS Keisatsu Sentai Patranger. He's also equipped with two treasures. The first one is a shuriken called Le petit monde and the other is a slingshot called Au loin.

He is voiced by Hiroyuki Yoshino who previously voiced Homurakogi and Soujikiloid.

Togeno Aves head is a black sea urchin head with cat ears and his face is a orange bull's head, his shoulders are black sea urchin halves with white sand dollars on them, his body is black with sea urchin spikes and the orange line is randomly on each body, his gangler safe is on his heart, his weapon is the Gunkan Gan a red and black sniper rifle that resembles a gray battleship.

In episode 14 he had made his first appearance in the back world where he let his boss know to see his plan to play out which is about him teaming up with the younger brother of the Smash Brother into killing the cops.

He'd appeared in the human world where he was assisting Odordo Maximoff in this plan of theirs, so he used the ability to shrunk himself down in order to gain access to the Trigger Machine Drill in order to place a booby trap inside it. Once that was done they commence the plan into action where he was "attacking" Odordo (disguised as a human) to fool the cops into attacking him.

A while later they were at the factory and he was asking Odordo Maximoff about why does he want to team up with him. When they're about to head back to defeat the remaining cadets they were then ambushed by the thieves, so in retaliation he discarded the shuriken called Le petit monde (which translate as "Small World") and they escape.

A while later they were at the site where Keichiro was poisoned, they'd explained about there plan to the two cops, after that he'd showed his boss (who's now in the human world along with his two generals) to watch the fight as it began to commence. During the fight Odordo used his ability in order to confused the duo with his ability making things much easier to for Togeno and Odordo to fight them. However the cops destroyed the sound wool, so he was about to fire one of his needles at them but Patren3gou deflected one of the needles and accidentally poisoned Odordo by mistake. Which leaves him to be defeated by the cop duo, but thankfully he was saved by his boss, after being scolded by him for the plan to failed.

In episode 15 he'd appeared at a mining facility where he received one of Destra Majjo's treasure to increase the projectiles that he'd fired from his sniper rifle because he'd explained about the two treasure that Smash Brothers were using does. A while later he'd used it to sniped the citizens with his poison needles from a distance. However he'd draws the attention of Lupin Blue because he was out shopping for some groceries and Togeno fought him however he has some assistance from lupin yellow and red. While Lupin Yellow distract Togeno Aves as a moving target Lupin Red got out the scissor and blade dial fighter as he used the part as a shield to protect himself from the onslaught that's been fired by Togeno Aves after that he was knocked down to the ground was pinned there as Lupin Red gained access to Togeno's safe (which his password is 9-0-9) and stole Au loin (which translate as Far Away) Slingshot, but Togeno Aves booby trapped his safe because the treasure itself was bait and he was about to poisoned the remaining thieves, but he was stopped by the injured cops.

So he fought them instead. However they weren't fully recovered from Togeno's boss attack and he was about to finish them off once for all if it wasn't for the arrival of a slightly healed Patren1gou, after that he was then taken out PatrenUgou. Because once he was defeated the victims that he'd poisoned have been removed from their system.

However thanks to Goche Ru Medou he was then enlarged and fought Patkaiser Strong after that he was then destroyed by this finisher called PatKaiser: Break-Up Strike. 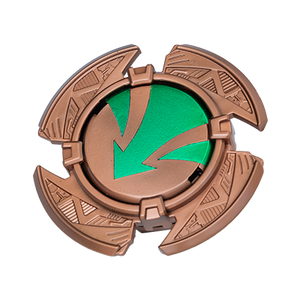 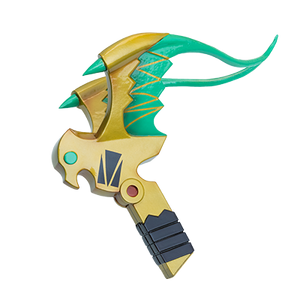