Villains Wiki
Register
Don't have an account?
Sign In
Advertisement
in: Kids Next Door Villains, Cartoon Villains, Incompetent,
and 41 more

Destroy the K.N.D. and be acknowledged by everyone else (failed).

The Toiletnator (real name: Lou Pottingsworth III) is a recurring joke character from Codename: Kids Next Door. He is obviously a toilet-themed supervillain, a motif that has unclear justifications even compared to the show's other villains. He is seen as a non-threat by KND operatives everywhere and shunned by other villains to the point that they take deliberate measures to keep him away from their villainous meetings.

Despite all of this, he is incredibly enthusiastic and jubilant about being a villain and completely oblivious to the fact that no one wants him. His "powers" include several toilet-related abilities such as shooting toilet paper from his arms. He is Numbuh 4's arch-nemesis.

Despite his ineptitude and his bad reputation, the Toiletnator is shown to be the least evil villain and desperately wishes to be respected as a villain and is overly enthusiastic about his "job". The only reason given for why he wants to destroy the KND is that he assumes doing so will earn him Mr. Boss's respect. While most other villains have some discernible purpose or reasons and are often themed around things that children typically hate, the Toiletnator is very much a "card-carrying villain", having an irrational reason and seemingly wants to destroy the KND for the purpose of being a supervillain in and of itself.

The Toiletnator is particularly kind, friendly, enthusiastic, cooperative and willing to do whatever he can to get on Mr. Boss' good side, much to his distaste. On at least two occasions, Mr. Boss has been deliberately sending him false invitations sending him to remote locations in an effort to keep him away from villainous meetings. He also appears to be extremely credulous, gullible, and stupid. He will do anything to try to get on Mr. Boss' good side.

In the episode "Operation: F.L.U.S.H.", Toiletnator decides to prove himself worthy to the other villains by defeating the KND in their treehouse. However, because the members of Sector V were away at the time, the other villains had already taken over the treehouse without resistance and as a result the empowered Toiletnator defeats his own allies, mistaking them for the kids, who arrive right afterwards just when his sudden burst of competence wears off.

In the comic story "Operation: H.I.S.T.O.R.I.E.", Toiletnator's origin is revealed: he'd once been Lou Pottingsworth III, an executive for Evil Adult Industries, before he was assigned by Father himself to become part of the company's operation to mass-produce their new vegetable: "asparigross". But when the Kids Next Door attacked the factory building site, Lou hid in a porti-potty and was trapped in there for several days when it was knocked under a large mass of rubble, forced to eat nothing but urinal cakes. There, he was visited by "The Almighty Protector of Potty" (some form of toilet god), who'd chosen him to be its knight (the only reason being that he'd been the only one to use the bathroom in a while) and bestowed him with toilet-based powers, which he used to punish kids who wrote on the bathroom walls, misused toilet paper, and forgot to flush. The comic also revealed that the Toiletnator is actually Numbuh 4's uncle and Mr. Beetles long lost twin brother. 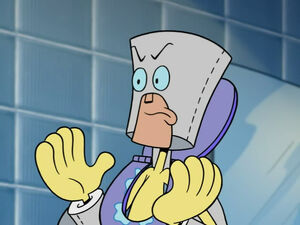 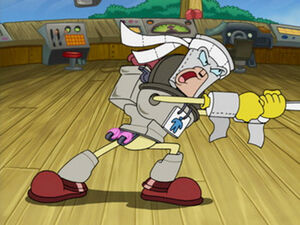