Toji Fushiguro is a major antagonist of the anime and manga series, Jujutsu Kaisen. He serves as the main antagonist of Gojo's Past Arc. He was an infamous assassin, known as the Sorcerer Killer, and a former member of the Zenin family, one of the three great family clans of the jujutsu society. In the summer of August 2006, he was contracted by the Time Vessel Association among other groups throughout his time as a non-curse user assassin. He is also the father of Megumi Fushiguro and enemy of Satoru Gojo.

When he was still with the Zenin Family, Toji went to take a look at a young Satoru Gojo and was surprised that the boy was able to notice him. At some point, Toji met with Naobito to discuss him selling his son to the Zenin Family once the boy's cursed energy manifested.

In 2006, Toji meets with a member of the Time Vessel Association, and accepts a job to assassinate the Star Plasma Vessel. Later at a race track, Toji met with a member of the Time Vessel Association, informing them that he had used their money to put a bounty on Riko Amanai. The intention begin that hitmen and assassins would slowly wear Gojo down before Toji made his move. The deadline for the bounty is designed to cause Riko's bodyguards to relax and not expect another attack. After listening to Toji, the employer leaves but not before asking Toji how Megumi was doing. Toji responds by asking who that person is.

On the day Riko is to merge with Tengen's, Toji finally strikes and wounds Gojo with a sneak attack. Geto uses a curse to swallow Toji but Toji manages to cut himself free using a cursed weapon. Gojo then faces off against Toji, while Geto, Misato, and Riko head into the college. When Gojo tells Toji that the bounty was taken down, Toji reveals he was the mastermind and only used it to weaken his opponents. Toji manages to evade all of Gojo's attacks and slip from sight. Gojo, unable to sense his target, clears the battlefield to gain a clear line of sight, only for Toji to release a insect swam to block Gojo's view. Attacking from Gojo's blind spot, Toji stabs him in the throat before slashing and stabbing him. Toji then claims he is finally back in the swing of things as Gojo lies on the ground bleeding to death.

After taking care of Gojo, Toji uses footprints and his enhanced senses to track Riko and the others before shooting Riko in the head with a handgun. When a shocked Geto asks how Toji was there, Toji then says that he has killed Gojo and Geto attacks in anger. While they fight Toji explains to Geto how he was able to remain invisible at the college and even how he fights. Geto does not care and instead wants to know about how he tracked them down and what happened to Misato. Toji admits he took care of her but doesn't know if she is alive. While Geto briefly gets the advantage and tries to cripple the assassin by stealing his curse and tools. Toji easily manages to defeat the spirits and cuts Geto down. Deciding not to kill Geto due to the risk of freeing his curses, Toji kicks him and tells him that all their magic was useless in stopping someone with no powers. He then remembers that Megumi is his son and why he chose the name.

Toji took Riko's dead body to the Time Vessel Association base to be verified. Toji and his employer then leave after the association transfers the money to their account. Outside the Association's base, Toji is shocked to encounter Gojo. Having used Reverse Cursed Technique to heal himself, a delirious and manic Gojo explains how he figured out the technique and how Toji almost killing him helped him master his abilities. Toji takes Gojo on but is easily overwhelmed. While quickly analyzing Gojo's abilities to formulate a counterplan, Toji is utterly blindsided by a technique combining Gojo's different abilities into a completely new and unpredictable attack - Hollow Purple. The attack fatally wounds Toji before he can fight back. As he dies, Gojo asks if Toji has any last words. After some thought Toji tells his killer that Megumi will be sold to the Zenin family and to do whatever he wanted with that information. This causes Gojo to track down Megumi with the intention of telling him about his father.

A tall muscular man with mid-length straight black hair that reaches to his ears, Toji has green eyes like his son, thin black eyebrows and a sharp scar over the right side of his mouth just on the edge of his lips.

For casual attire, Toji wears a simple outfit consisting of a long sleeved shirt and matching pants with sandals. While fighting, Toji wears a tight fitting short sleeve shirt and sports tan baggy training pants with a black belt weaved through the waist, as well as black martial arts slippers. While still a member of the Zenin family, he wore a dark colored haori over a black yukata.

A cold, calm, confident type of man Toji likes to enjoy himself and make money using his skills. He appears to enjoy insightful conversation with others as long as it somehow pertains to himself and can trade witty banter with the highly sarcastic likes of Satoru Gojo. Upon meeting, Satoru asked Toji if they had met before but Toji assured him that he's not the type to remember some guy either.

In battle, Toji wears a crazed expression as if he's lost in the thrill of the fight, but he's always maintaining a cool and calculated head and plotting his next move.

An assassin who's garnered the name "Sorcerer Killer", Toji spent his time gambling between assignments from shady clients. He married a woman and left her just as quickly, leaving his newborn child behind without knowing their gender and eventually forgot their name. Toji even planned on selling his son to the Zenin family he had left behind, exploiting the young Megumi for the cursed technique he would eventually inherit.

Toji doesn't question his clients motives as long as the money is right and generally doesn't do any extra work for free. He's bold and dangerously calculated in his strategies, using his jujutsu knowledge to outwit even the most prophesized sorcerers. This garnered him a reputation large enough to gain attention from the wealthy Time Vessel Association for such an important job that could ensure their future. While he thought the religious members of the organization were crazy, he got along well enough with their middle man to invite him to eat.

As a non-sorcerer raised in the Zenin family who values cursed techniques above all, Toji is just another man who has suffered due to the interests of the sorcerer clans in a very similar manner to Maki Zenin. His evil actions are a result of his dejection towards the jujutsu world as he attempts to spite it. Born without curse energy, Toji eventually left the Zenin family and married a woman, taking her name "Fushiguro". He sold their son to the Zenin family because he believed in young Megumi's potential to be a real sorcerer, naming him "Megumi" because it means blessings.

Toji was able to complete his final mission for the Time Vessel Association and should have cut and run when faced with a rejuvenated Satoru Gojo. However, due to his disdain for the jujutsu world and the sorcerer families, Toji chose to try and cut down the most gifted sorcerer in the world as another way to spite them all. Unfortunately this pride cost Toji his life, unable to look past his demons he deviated from his natural instincts and looked past the uneasiness plaguing him during the fight.

Keeping up with his cold persona, Toji chose not to utter any final words at first. In his final moments he thought of his ex-wife and their son, so he decided to tell Satoru that he would be sold into the Zenin family in a few years. A decision that would eventually lead to Satoru becoming a close mentor for Megumi in the future as well as granting Megumi a chance to work as a jujutsu sorcerer. 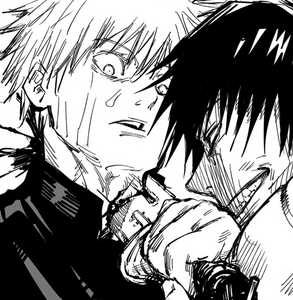 Toji stabs Gojo in the neck.