Friend of the Hero

Tojiro Goto, also known as the Capricorn Zodiarts, is one of the Horoscopes and a major antagonist in Kamen Rider Fourze.

He was portrayed by Ryôsuke Kawamura.

In Junior High, Goto formed a band with JK called Gene Goto but it did not do very well due to Goto's bad guitar playing and JK's bad singing. After coming to AGHS, Goto received a Zodiarts Switch and becomes the Capricorn Zodiarts. After finding out JK is the host DJ Gene on a popular radio show, Goto tracks him down to reform their band as Gene Goto Dark Night Carnival. However, Goto secretly intended to use the radio show to brainwash their listeners into becoming crazed fans. JK discovers this and tries to cancel the program, but Goto convinces JK not to by reminding him of his father's past changes JK's mind. JK then quits the Kamen Rider Club after revealing they will have a live show a few days later.

However, Gentaro has learned a song JK's father that he used to sing to his son when growing up, so she manages to convince JK not to achieve his dream through Goto's plan. Despite Gentaro's poor ability with the guitar, the Rider manages break his hypnosis of the student body. Infuriated, Goto transforms into the Capricorn Zodiarts and battles Kamen Rider Fourze, but with JK's return to Gentaro's circle of friends, Gentaro gains the power to use Cosmic States once more and defeats the Capricorn Zodiarts before he even has the chance to use the Supernova abilities Gamou gave him.

Following his defeat, Goto was teleported to Gamou's headquarters where he had his Capricorn Switch was confiscated and his memory of being Capricorn erased.

Following this, Goto was able to mend his friendship with JK. 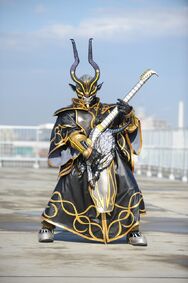 Capricorn Zodiarts
Add a photo to this gallery

Retrieved from "https://villains.fandom.com/wiki/Tojiro_Goto?oldid=3540795"
Community content is available under CC-BY-SA unless otherwise noted.