Tokageron is a Shocker Kaijin with the characteristics of a poisonous lizard and an antagonist in episode 13 Kamen Rider.

He was portrayed by Shinzo Hotta.

The Oriental Nuclear Research Institute, which Shocker planned to destroy, was protected by a powerful barrier. Shocker scientists developed a ball to destroy Barria, but to do so, a ball weighing 5 kg had to be thrown from a distance of 20 m. Because they didn't presently possess a modified human who could do this, they abducted professional soccer player Ken Nomoto and remodeled him into Tokageron.

After that, Tokageron leads 10 revived monsters and hides in a private house. After Kazuya Taki and Ruriko Midorikawa searched his house, they attacked the two to prevent any trace of their plans from getting out. Kamen Rider then rushed in to save them, but was repelled by Tokageron.

Based on a poisonous lizard, Tokageron's poison is potent enough to fell elephants. He also has tremendous leg power enabling him to kick things at super speeds. 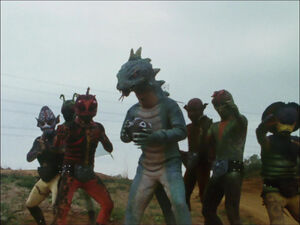 Tokageron with the revived Shocker kaijin. 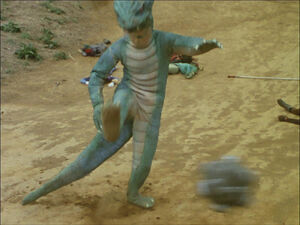 Retrieved from "https://villains.fandom.com/wiki/Tokageron?oldid=4186865"
Community content is available under CC-BY-SA unless otherwise noted.