Tokiomi Tohsaka is a villain from Fate/Zero who is the father of Rin Tohsaka and Sakura Matou, two of the heroines from Fate/stay night. As a member of the Tohsaka family, he entered the fourth Holy Grail War as the master of Archer. Kiritsugu Emiya identifies Tokiomi as the third of the three most threatening magi involved in the war after assessing all the Masters involved.

Tokiomi is a well-dressed man clad in a white long sleeve shirt with a crimson tuxedo over it that has black buttons, as well as a blue ribbon. He wears crimson pants and brown shoes, and has elegant black hair and a short black beard, and has blue eyes.

Tokiomi is an arrogant, manipulative man who, as all magi do, strives to reach Akasha, or the root of all knowledge. While he cares for his daughters and wife, he has no idea of the problems and pain they face due to his decisions. Much to his displeasure, his arrogant and materialistic servant, Gilgamesh, has difficulty in acting covertly and obediently to him. In turn, Gilgamesh dislikes his master, who he considers boring, and is therefore intrigued by his apprentice Kirei Kotomine's participation in the war.

As all magi do, Tokiomi strives to reach Akasha, or the root of all knowledge. He and Risei Kotomine are close friends; through Risei himself, Tokiomi meets his son, the young Kirei, whose command spells have appeared three years prior to the start of the fourth Holy Grail War. The two men arrange for Kirei to be transferred from the Holy Church into the Magi's Association as Tokiomi's pupil, that while leaving Kirei uninformed to the true nature of the marks on his hand. Both Tokiomi and Risei intend to use Kirei to make sure that Tokiomi will obtain the Holy Grail and that Kirei's role is to provide Tokiomi with additional command spells and another Servant. Similarly to Risei, Tokiomi holds Kirei in high regards in terms of ability and character despite how little his understanding is of how empty the young man feels.

He is married to Aoi Tohsaka, the childhood friend of Kariya Matou. As a father, he seems to care little for his daughters Rin and Sakura; he leaves his estate in the hands of Rin, who intends to become his successor, and allows Zouken Matou to adopt Sakura because Tokiomi has no desire to train a second child as a magus, given that there is a traditional belief that training a second child would introduce competition. While Aoi does not oppose his sudden decision to give Sakura away, said decision comes as a shock to her. When Kariya confronts Tokiomi regarding Sakura's adoption, despite being aware of the true nature of the Matou family's magecraft and that Rin and Sakura may eventually become enemies as the inheritors of the Tohsaka and Matou families respectively, Tokiomi only declares that he cannot think of anything greater than for one daughter to be renowned as a legendary victor and her sister to be known as a worthy opponent. Towards the end of the fourth Holy Grail War, Tokiomi's true intention behind adopting away Sakura becomes apparent during his visit with Rin. He is aware that both his daughters possessed exceeding rare sorcery traits: Rin possessed all five elements while Sakura, although she lacked all five, possessed only Imaginary Numbers, and Tokiomi knew that the daughter he did not train to be the Tohsaka successor would be manipulated and used due to her abnormality. In order for Sakura to fulfill her innate potential to becoma a powerful mage, Tokiomi wanted her to learn the magecraft of the Matou family so that she would be able to protect herself from others wishing to use her as a result of her lineage.

Tokiomi ultimately dies by the hands of his own apprentice, Kotomine, in the final volume of Fate/Zero. Considering him to be a loyal apprentice, he gives him an Azoth knife as a parting gift, only for him to be murdered by it afterwards. This is the same knife that is passed onto his daughter, Rin, and is wielded by Shirou Emiya to ironically assassinate Kirei later in the Fate scenario of Fate/stay night.

As the head of the Tohsaka family, Tokiomi has mastered the principles behind their jewel based magecraft in conjunction with his own fire attribute to become an effective battle mage. Using a staff topped with a jewel into which he has stored prana for many years, he can summon elemental spells in combat instead of the more simple jewel detonation used by Rin. He is also shown to be capable of manipulating air currents to land from a great height and despite the elemental difference, performed an ice based magecraft whilst teaching his daughter, Rin, how to use jewel magic.

Tokiomi does not seem to believe himself a man of particular talent, but at the same time has the pride of a magus and follows an unerring path of elegance in all things. To this end he rarely shows anything but a calm demeanour, showing no hint of worry when faced in battle by another magus. 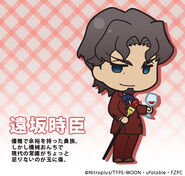 Fate/Zero Cafe
Add a photo to this gallery
Retrieved from "https://villains.fandom.com/wiki/Tokiomi_Tohsaka?oldid=3553987"
Community content is available under CC-BY-SA unless otherwise noted.