Mischievous Monster
Tokoloshe are monstrous, dwarf-like water sprites in Zulu mythology. They are considered a mischievous and evil spirits that can become invisible by drinking water. Tokoloshes are called upon by malevolent people to cause trouble for others. At its least harmful a tokoloshe can be used to scare children, but its power extends to causing illness and even death upon the victim.

Another explanation is that the Tokoloshe resembles a zombie, poltergeist, or gremlin, created by South African shamans who have been offended by someone. The tokoloshe may also wander, causing mischief wherever it goes, particularly to schoolchildren. Other details include its gremlin-like appearance and gouged out eyes as seen in the image on the right.

The Tokoloshe, according to the Zulu shaman Credo Mutwa, has been known to take on many forms. One form is as described above, but others have portrayed the Tokoloshe as being a bear-like humanoid being.

"Some Zulu people (and other southern African tribes) are still superstitious when it comes to things like the supposedly fictional tokoloshe—a hairy creature created by a wizard to harm his enemies (also … known to rape women and bite off sleeping people’s toes)." They get their power from a hot poker thrust into the crown of the body during creation.

The way to get rid of him is to call in the n’anga (witch doctor), who has the power to banish him from the area. According to legend, the only way to keep the Tokoloshe away at night is to put a brick beneath each leg of one's bed. However, this will not protect anything but the person whose bed it is along with the bed itself, as it may instead cause havoc not involving said people. 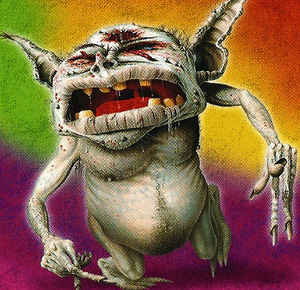 A form Tokoloshe could take. 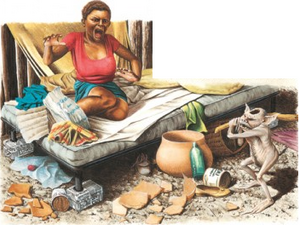