Second-in-command of the Castle Guard.

Tolyn is a supporting antagonist the 2019 Netflix prequel series The Dark Crystal: Age of Resistance. He is second-in-command of the Gelfling Castle Guards who serve the Skeksis and is Rian and Gurjin's arch-rival.

While his puppeteer is unknown, his voice was provided by Jack Myers, who was credited for providing additional voices.

Tolyn is a loyal guard of the Skeksis and respects Ordon as his captain, but hates his son Rian. Out of all the Castle Guards, Tolyn is the most loyal to the Skeksis and trusts and serve them till the end. When he takes over as captain of the guard, Tolyn would punish anyone who sides with traitors or oppose the Skeksis. Tolyn seems to be the polar opposite of Rian; as while Rian is brave, adventurous, caring and noble, Tolyn is mean, selfish, cowardly and treacherous. He likes picking on Rian, Gurjin and other Gelfling for being undisciplined.

His mistrust and hatred of Rian, including his undying loyalty to the Skeksis proves to be his downfall as betraying and selling out his fellow guards and other Gelfling led to his own demise by SkekTek.

Even in his dying moment, Tolyn begs SkekTek to be set free so he can continue to serve him and the rest of the Skeksis loyally, showing that Tolyn is nothing more than selfish, back-stabbing coward who only cared about himself and regrets nothing for betraying everyone around him.

Tolyn first appears at the entrance of the crystal castle and was respected by Ordon for his adherence to tradition and excellence in guard drills, having been left in charge of the castle's security when Ordon accompanied SkekLach and SkekOk to Ha'rar. Tolyn seems to always look down on Rian and is the only guard who doesn't like him.

When Rian was framed by SkekSil for Mira's murder, Tolyn became suspicious of Gurjin, Rian's best friend, and questioned his loyalty, while threatening him. Later ordered to escort Aughra from the castle, Tolyn became fearful, remembering stories of Aughra sneezing and crumbling an entire mountain. Using their fear, Aughra claimed all of the stories to be true, and threatened to do horrible things to him and his compatriot if they didn't let her pass. Frightened of her every move, Tolyn stayed behind and let her go.

Days later, a Vapra paladin informed the castle guards that Rian was telling the truth of the Skeksis' crimes, and that SkekVar had murdered the All-Maudra. The guards decided to rebel against the Skeksis, but not Tolyn, believing the Vapra paladin's mind was infected from dreamfasting with Rian, and so he informed the Skeksis of the guards' revolt. After Tolyn betrays the guards, SkekTek drains and kills them all. This shows Tolyn is nothing but a backstabbing coward. Despite his loyalty to the Skeksis, SkekTek had the Arathim bring Tolyn to his laboratory to be drained of his essence. Horrified to find out the rumors of the Skeksis draining essence was true, Tolyn begged SkekTek to free him for his loyalty, only for the Scientist to tell him that his treachery to his fellow Gelfling was worthy of the same fate his fellow guards received for betraying the Skeksis. Tolyn's essence was drained, obliterating his body. Due to Tolyn's death, the Castle Guards have been avenged. 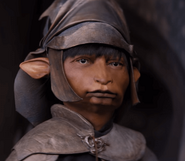