Fishing.
Cooking.
Hunting.
Punishing Tom the Cat for his actions.

Keep Tom out of trouble (succeeded).

While it was frequent for Tom to be reprimanded by his owners, only the Deitch Era owner went into villainy territory as he was shown to sadistically enjoy beating his cat for the smallest infractions. He is the only owner of the Tom and Jerry franchise to never reprimand Tom of his actions.

He was voiced by the late actor Allen Swift.

Tom's owner is an overweight, average height, middle-aged, bald white man with very severe temper problems, often going red in the head when furious. Also, when he is angered, his teeth often become pointed and sharp. His face also turns bright red when he is even more angry at Tom.

Tom's owner is much more brutal and violent in punishing Tom's actions when compared to Tom's previous owners: beating, pummeling and thrashing Tom repeatedly, screaming at him, stomping on his hand and causing it to swell, searing his head with a grill, forcing him to drink an entire carbonated beverage, slamming his fingers with a lunchbox lid and even wrapping a shotgun over his head and then firing it. He never reprimands Tom for his actions but always hurts him right away.

He also often ties Tom up very tightly in order to keep him out of trouble. He often smiles or laughs maliciously after punishing Tom. He appears to have rage issues in general as in Down and Outing, he is shown driving recklessly by driving at high speeds and not looking at the road, then yelling at another driver when called out for his careless driving.

However, when he doesn't have problems, he acts like a normal person and looks happily. He often sings a tunes for himself when he is calm, happy, and enthusiastic. He appears gluttonous as he has a giant barbecue with many plates full of steak only for himself in High Steaks (given his overweight appearance). He also throws a fit and viciously pummels Tom when only one of his many steaks gets slightly damp.

In Down and Outing (1961), his punishments towards Tom were stomping on his hand and let it graphically swell, viciously beat Tom twice for slamming his shoe with and oar and by pulling him into the water with a fishing rod, which caused the owner to beat Tom and tie him up to a bucket.

In High Steaks (1962), his punishments are that he seared Tom's face with a meat searer, slammed a tennis racket on his head, forcing Tom to drink an entire bottle of carbonated soda, and viciously beat Tom after knocking down his steaks (and him) to then tie him up to a chair to keep Tom out of trouble.

In Sorry Safari (1962), his punishments are wrapping a shotgun around Tom's head and then firing it, slamming Tom with a coffee mug after a lion tried to kill the owner while he used the mug to defend himself instead of a shotgun, and his final punishment was slamming Tom's fingers against a lunchbox and causing Tom's fingers to look like piano keys.

Unlike Tom's previous owners, he speaks quite rarely. He has no lines of spoken dialogue in High Steaks while he speaks only once in Down and Outing and he has two lines of dialogue in Sorry Safari. 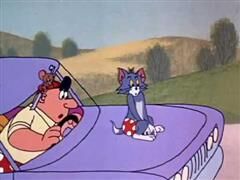 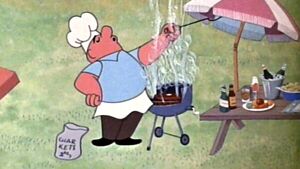 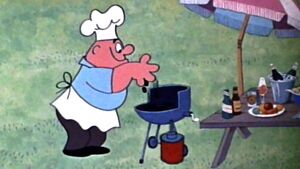 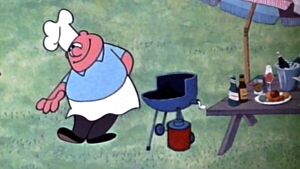 The Owner forcing a shake bottle of carbonated soda into Tom's mouth while grinning sinisterly.
Add a photo to this gallery 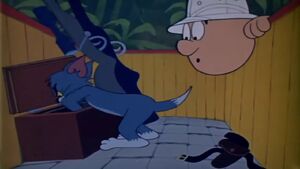 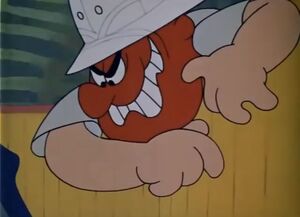 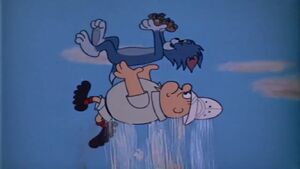 Retrieved from "https://villains.fandom.com/wiki/Tom%27s_Owner?oldid=4357407"
Community content is available under CC-BY-SA unless otherwise noted.