Leading the other celebrities.

File a class-action lawsuit against South Park for making fun of him (ostensibly).

Capture the Muslim prophet Muhammad and steal his inner goo to make himself immune to ridicule (actual goal).

Thomas Cruise Mapother IV, widely known as Tom Cruise, is a major antagonist of South Park. He is based on the real-life American film actor, producer and Scientologist of the same name.

He was voiced by the series' co-creator Trey Parker.

Cruise first appeared on South Park in the episode "Trapped in the Closet," in which he locks himself inside Stan Marsh's closet after Stan tells him that Leonardo DiCaprio, Gene Hackman, and "that guy who played Napoleon Dynamite" are better actors than him. Cruise believes Stan to be the reincarnation of Scientology founder L. Ron Hubbard and Stan telling him this causes him to break down in hysterics. Many references to the real-life allegations that Cruise is gay are made throughout the episode, most prominently Cruise going so far as to deny that he is physically "in the closet."

Cruise next appears in the two-part episodes, "200" and "201." While on a class field trip to a fudge factory, Stan, Kyle, Butters, and Mr. Garrison see Cruise working there and refer to him as a "fudge packer." Even though he is physically in a fudge factory, loading fudge into boxes, Cruise angrily denies being a fudge packer and insists that he is "fly fishing." He becomes so infuriated that he gathers every celebrity that has ever been offended by the residents of South Park and intends to bring a class action lawsuit against the town. This group he assembles is briefly known at one point as the Legion of Doom.

Cruise's actual plan, however, is not to sue the town. He actually wants them to bring him the Muslim prophet Muhammad, whose inner-goo makes him immune to ridicule. When the Ginger Separatist Movement threatens violence so that they can get the goo, Cruise and Rob Reiner activate the newly-rebuilt Mecha-Streisand to destroy South Park.

In the second part, "201," after the gingers capture Muhammad, they agree to let the celebrities have some of the goo in exchange for them being allowed to use Rob Reiner's goo transfer machine. Some of Muhammad's goo gets transferred into Cruise, causing a black censor box to appear over him, similar to the one appearing over Muhammad. Later, when the celebrities are fighting the Super Best Friends, Seaman jumps on Cruise's back, and everyone jokes that he has semen on his back (a running gag with Seaman is that people mispronounce his name as "semen" instead of the correct "sea-man"). Cruise's censor box disappears, but the explanation of why this happens is censored (though in the uncensored version of the episode (with Muhammad still censored) it was because of violence). After Cruise is defeated, Stan apologizes to him for calling him a fudge packer and saying that he had semen on his back. Cruise is upset, and wishes to go somewhere where he'll never get made fun of. The boys tell him that they know a place where everything is happiness and joy, and then it cuts to the moon with Cruise's corpse lying next to Jambu, the orca whale on the moon.

Tom Cruise is depicted as a relatively faithful representation of his real-life self, with brown hair and slight stubble. In "Trapped in the Closet", Tom Cruise is wearing a black suit with a striped blue shirt underneath. In "200", Tom Cruise also wears a fudge packing uniform while working at a fudge factory. 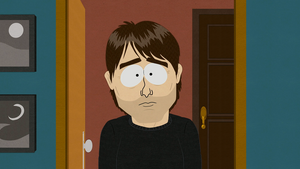 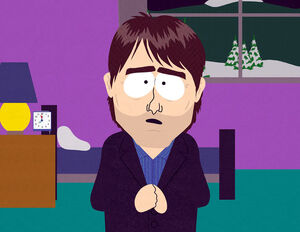 Tom Cruise upset that Stan prefers Leonardo DiCaprio over him. 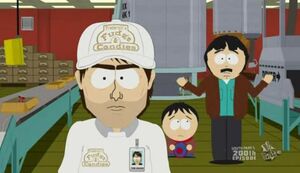 Tom Cruise as a Fudge Packer, with Randy having Stan apologize to him. 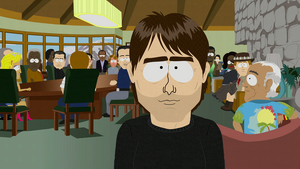 Tom Cruise with all the celebrities South Park had ridiculed in the past. 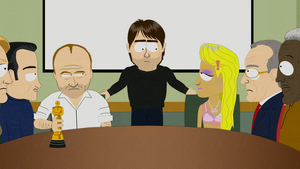 Tom Cruise speaking to all the other celebrities about being ridiculed by South Park. 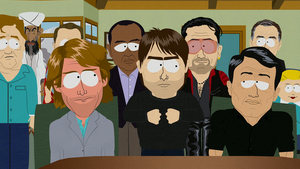 Tom Cruise inspires other celebrities to take their revenge on South Park with him. 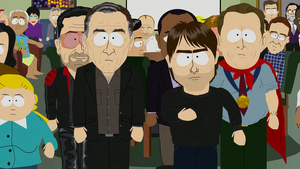 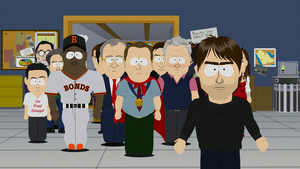 Tom Cruise with the other celebrities. 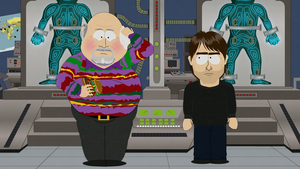 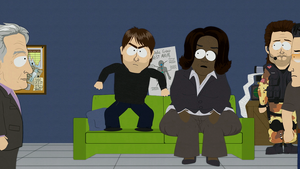 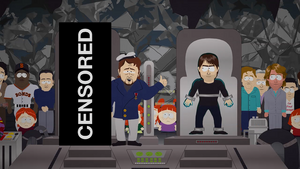 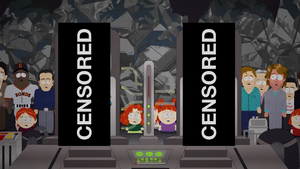 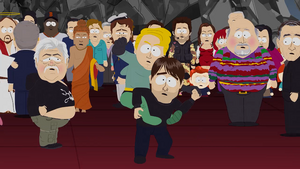 Stan says Tom Cruise has Seaman on his back, ridiculing him. 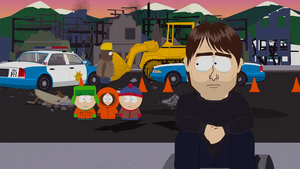 Tom Cruise sad about being mocked. 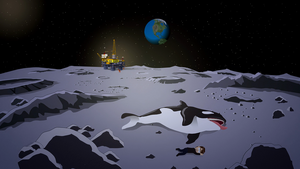