Demon Prince of the Underworld

Listening to Love Sentence and trying to control his anger.

Conquer the heart of Star and be her boyfriend again (succeeded for a while).

Prevent Marco Diaz from meddling in their affairs (formerly; failed).
Getting over his anger issues (ongoing).

Manipulation (of and psychological)

Thomas Draconius "Tom" Lucitor is a recurring antagonist in the Disney XD series Star vs. the Forces of Evil. He is an inter-dimensional underworld demon and the Star Butterfly's ex-boyfriend.

He was voiced by Rider Strong, who also played Shawn Hunter in Boy Meets World.

Tom first appeared in the episode "Blood Moon Ball". where he goes to Earth to invite Star to the Blood Moon Ball a dance held by demons once every 667 years and while she rejects him, Tom points out that he has been working on his anger problems apparently going 53 days without getting angry. While impressed Marco karate chops off Tom's hand believing Tom a threat causing Tom to barely keep his anger under control and calm down. As he leaves he gives Star a bell so if she changes her mind she can come join him.

Later when Star decides to go Tom is happy and attempted to tone down the party considerably by demon standards so that it would be more enjoyable for Star. Unfortunately for Tom, Star does not do everything he wanted like wear a spider in her hair and the song he choose for them to dance to under the Blood Moon (which would bind their souls making them soulmates) was not playing so he went to change it only for Marco who snuck into the party to steal the dance in an attempt to save her from Tom. Angered Tom attempts to attack Marco right after their dance only to be froze by a disappointed Star. In "Naysaya" it is revealed right after he was unfroze he put a curse on Marco that would reveal his embarrassing secrets and insecurities to prevent him from asking Star out.

In "Mr. Candle Cares" Tom sends one of his minions (Mr. Candle) to try to make sure Star and Marco are not going to get together as well as hoping to manipulate Star into getting back together with him by pointing out she will be queen soon and it will be a big responsibility. Once Marco finds out and provokes Tom by claiming he and Star are officially a couple, Tom captures him in a fit of anger. After finding out Marco lied Tom gets upset that Marco lied to him only for Marco to point out he lied to Star. Deciding Marco couldn't leave he decides to give Marco a chance through a fight to the death allowing Marco to choose whatever he wants the challenge to be and even accepts his term of if he looses he'll tell Star the truth. After Marco chooses Ping Pong but looses several times to Tom, they start to talk about how both are fond of Star's fun loving personality. Deciding that despite winning to spare Marco and tell Star the truth admitting he tried to trick her and that he was wrong. After Star punches his arm in retaliation and hugs Marco Tom departs on semi-good terms.

Tom shows up again in "Friendenemies" where he seemingly wants to become closer to Marco though in secret it is his final test to get over his anger problems set up by his life coach Brian. To do this Tom invited him to see a marathon of his favorite late martial artist: Mackie Hand and to ride to it in his undead horse carriage. Skeptical Marco asks which movie is his favorite with Tom being hesitant but gives at first two films before choosing the original in Swedish. Content Marco apologies over not trusting them only for Tom to admit he doesn't have many friends due to not many people making the effort to know him. All of a sudden a couple of street racers mock Tom and the carriage causing Marco to stand up for him by challenging them to a race but tells Tom to not speed. As the racers speed they are immediately pulled over causing Tom to admit that was better then destroying them. The two then bond over finding out they also share a fondness for the boy band "Love Sentence". However as the the marathon is about to start Tom tells Marco it stay in the carriage for a little longer and when refused gets angry causing him to fail his final test which Brian points out. Realizing Tom used him, Marco calls Tom out who tears up the tickets. Angry as Marco storms off only for Tom to try to make amends admitting that while he hated the movies he was truly a fan of Love Sentence only to sing part of one of their songs to point this out. Marco still upset refuses to accept the apology until Tom resurrects Mackie Hand. The episode ends on them admitting while not friends they are on better terms. That said later episodes due state they have become friends and hang out somewhat regularly.

Tom plays a major role in Season 3, and is now one of the main characters. He rekindles his relationship with Star between "Demoncism" and "Lint Catcher", having fully turned to the side of good.

Tom stays as Star's boyfriend for most of the Season, but eventually breaks up with her because he believes she would be happier with Marco. Eventually, he convinces Marco and Star to admit their feelings for each other, a hallmark of his character development throughout the series (as at the beginning he refused to allow anyone to be with Star besides him).

Tom has spiky salmon-colored hair, very pale lilac skin, three red eyes (one in the middle of his forehead), black eyeliner under and around his eyes, two pale-orange white-tipped horns on the sides of his head, sharp teeth, and pointy ears and nose. In "Is Another Mystery", Tom is also revealed to have a long, red, pointed tail.

His usual attire consists of a red tattered T-shirt with a bright red star within a maroon circle in the center, long dark-red wristbands, maroon ragged shorts, a dark gray studded belt, brown-tipped orange boots, a hoop earring on his right ear, and two studs in his left ear.

In "Lava Lake Beach" and on the official season 4 poster, Tom is revealed to have a tattoo of a pitchfork on his upper right arm.

From "Curse of the Blood Moon" onward in season 4, he wears a red shirt, a maroon jacket, black pants and brown-tipped orange boots.

He is considered to be very attractive, as several girls in Echo Creek Academy, including Janna and Jackie, stare at and whisper about him when he passes by.

Tom is considerably quarrelsome and short-tempered, quick to lose said temper at the slightest provocation. When he is angry, Tom's eyes glow bright red, and he sometimes speaks in a low-pitched demonic voice. According to him, he inherits his temper from his father.  Since hiring his life coach Brian, however, Tom is shown to be much more in control of his anger, as evidenced by his 53-day anger-free streak. He has a very despotic, controlling, and authoritative personality and when things deviate from his plans they can set off his temper, even small things like Star not wanting to wear a spider on her head.

When not enraged, Tom can be rather easygoing, as he understands that Star might not want to go to the ball in "Blood Moon Ball" and is later willing to listen to Marco in "Mr. Candle Cares". Additionally, he shows to try to get over his anger several times, and eventually befriend Marco as well as helping him in some occasions.

In more recent episodes Tom has become a much better person, while he does not know how to be nice, he is at the very least willing to try.

Tom is able to produce and control fire. In the series' theme song, he offers Star a burning rose, and in "Blood Moon Ball," he creates fire with his hands and footsteps. He can also still control his limbs after they've been severed, and even reattach them. He is also capable of using curses and sealing incantations. 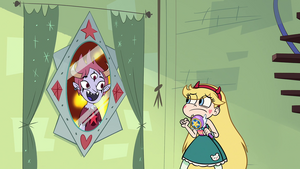 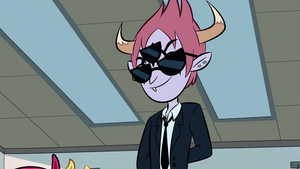 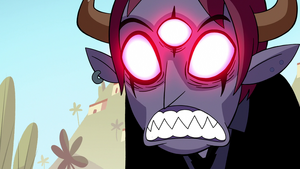 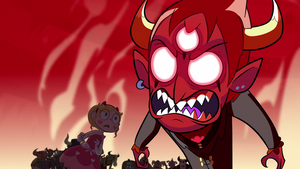 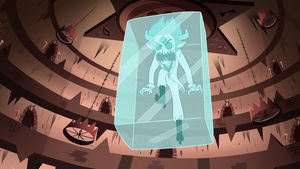 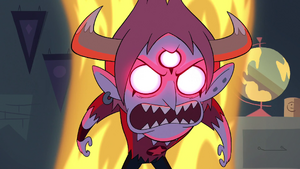 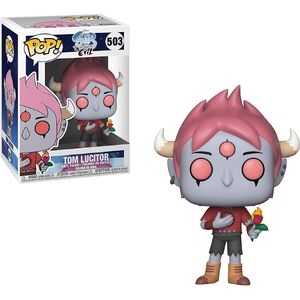