Villains Wiki
Register
Don't have an account?
Sign In
Advertisement
in: Articles under construction, Outdated Articles, Mature,
and 54 more
English

Leader of the Roanoke colony

Tormenting and killing encroachers on "her" land.

Retain her authority over the Roanoke land (succeeded).

Tomasyn White (also known as The Butcher) is the main antagonist of American Horror Story: Roanoke, the sixth season of American Horror Story. She is a Roanoke mob leader appearing, being the main threat haunted in Shelby and Matt Miller's past, who lead a sinister mob known as the "Roanoke community" and attacked Shelby & Matt. In fact, she is a spirit who lived at the 16th century colony of Roanoke.

Tomasyn White is portrayed by Susan Berger. In the re-enactment scenes of My Roanoke Nightmare, she is portrayed by the mentally unstable actress Agnes Mary Winstead. In turn, Winstead is portrayed by Kathy Bates, who portrayed Annie Wilkes in Stephen King's Misery and Miriam Mead in American Horror Story: Apocalypse.

Tomasyn White was the wife to John Tomasyn, governor of Roanoke. White left his wife in charge of the Roanoke Colony while he returned to England to gather supplies. When food was scarce, Mr. Cage and White's son Ambrose asked after the scarce rations, but she would hear no more of rebellion. The colonists rebelled against her and left her to die, but she was saved by Scáthach, the Witch of the Woods, and sold her soul. Later, the 116 settlers disappeared without a trace. Tomasyn, who regained control, leaded them and haunted the place surrounding Matt and Shelby's new house.

Following the moving in of Matt and Shelby Miller, she began to haunt and terrorise the young couple, hailing it to be her "land". Her first attempt was attempting to drown Shelby Miller in her outside hottub at night, who managed to save herself. The Butcher's apparition later appeared to Shelby, who while driving through the area at night, knocked her down with her car, who then lead her into deep into the forest, where she witnessed the ghostly colony sacrifcing a scalped man. She and Scathach then spot Shelby, who order the colony to seize her, but she managed to escape them. She later appeared during Matt and Shelby's seance with medium Cricket Marlowe, and declared the land and house to be her territory and for them to leave, and frightens them by telekinetically breaking a candle and a few windows in front of their eyes. When Cricket seeks her out again in the forest, she lays out a deal, in which she will return Lee Harri's missing daughter Flora who she kidnapped, on the terms Matt and Shelby leave her sacred ground. 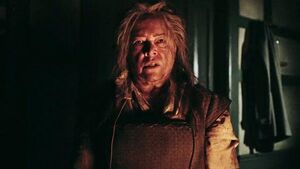 Agnes Mary Winstead as Tomasyn White in My Roanoke Nightmare.