To keep his secret crimes hidden from the public.

Lonnie Thompson Lincoln (also known as Tombstone or The Big Man of Crime) is one of the two main antagonists (alongside the Green Goblin) of the animated TV series The Spectacular Spider-Man.

Tombstone is depicted as a calculating, emotionless, and highly intelligent crime lord known as The Big Man (as opposed to being a Mafia enforcer like his comic book incarnation) though to the public he has the image of benevolent wealthy man, acting as a philanthropist.

He was voiced by Kevin Michael Richardson, who also voiced The Joker.

Although it is never specifically stated that he is either mutated or invulnerable, he does boast a chalk-white complexion and oddly pointed teeth. He easily bests Spider-Man in a physical confrontation at their first meeting, in which he did display superhuman strength and reflexes, catching and crushing a pool ball with a single hand, seems unconcerned about being killed in a bomb blast — even helping Spidey look underneath tables for the Green Goblin's "special" explosive — and takes several of Green Goblin's razor-bats through his back seemingly without pain in "The Uncertainty Principle". In "Gangland", he is able to hold his own in a fight against Doctor Octopus and Silvermane, the latter of whom had used a hydraulic exoskeleton to increase his strength. He turned to mega-villainy as Tombstone. Tombstone appears as the Crime Lord, controlling some events in the show.

Though little of Tombstone's early life is unknown, it is possible he is born with albinism that helped increase his strength and durability. Later in his life, he becomes New York's "Big Man of Crime" sometime after the previous Big Man of Crime, Silvermane, is arrested and exposed. Tombstone has been in control of his criminal empire for 12 years.

In Season 1, His voice is first heard as the "Big Man" when he has Hammerhead send the Enforcers to challenge Spider-Man during his fight with the Vulture. Norman Osborn tipped off Tombstone about a TRI-CORP shipment that was carrying a pair of Vibro-shock units and a protective suit. Tombstone and Hammerhead sent Montana and his men to steal that shipment, Hammerhead ordered Montana to don the suit and become Shocker. But Shocker once again failed to defeat Spider-Man, so Tombstone working through Hammerhead made a deal with Norman Osborn. Tombstone noticed that when Spider-Man engages in battles with the likes of Vulture, Lizard, and Shocker, he is too busy to interfere with The Big Man's empire. So he asked Norman Osborn to create super-villains to distract Spider-Man. Norman agreed since he would gain huge profit by making super-villains for Tombstone.

This results in the creation of Sandman and Rhino. Tombstone's operations were being ruined by Spider-Man, who was taking down many of Tombstone's criminal underlings. When Tombstone heard rumors of the web-slinger, he had Hammerhead investigate the matter proper to make sure his criminal associates were sincere. He makes an offer to Spider-Man that he will stop using metahumans so long as Spider-Man keeps his nose out of his affairs; he would even pay Spider-Man in advance. Obviously Spider-Man refuses and will keep fighting him in spite of the supervillain onslaught coming his way sooner or later.

Later in the season, Tombstone encounters the symbiote-influenced Spider-Man who arrives to demand the previous job opening. Tombstone agrees on the condition that Spider-Man does not fight crime for a week unless it was a supervillain.

However, later on, after Spider-Man realized the Symbiote's control over him and breaking free from it, he returns to Tombstone and broke their deal, saying that no amount of money is worth turning a blind eye to his works, and vows to bring him down. After Spider-Man leaves, the symbiote soon enters, which has now bonded with Eddie Brock to become Venom, and takes up Tombstone's job offering. Tombstone tasked Venom to destroy Spider-Man.

In the second season, Tombstone does not appear in the first half of the season. But in the other half of the season, Tombstone becomes involved in a gang war for control over New York with the Doctor Octopus and the recently released Silvermane. He even brought back the Enforcers to build up an army, something that angered Hammerhead as he has been left out of the loop after his failures. This causes Hammerhead to secretly turn on the Big Man after Norman Osborn manipulates him to do so. Tombstone unknowingly sets up a meeting with Doctor Octopus and Silvermane right before Hammerhead betrays them all and a fight ensues, which attracts the attention of New York and Spider-Man himself. During the fight, Tombstone assists Spider-Man facing the other two, after taking into the thought of his public image if he also fights Spider-Man in front of witnesses. When Silvermane and Doctor Octopus are taken out, Tombstone and Spider-Man battled each other in the sewers before he too is overpowered by the super-hero and is exposed and arrested for his crimes.

But before being taken to custody, Tombstone fired Hammerhead for his betrayal. However, Tombstone manages to pay for his bail but is put under surveillance by sixteen different government agencies, crippling his operations. After leaving prison, he goes back to his criminal empire, questioning that Hammerhead has never shown any signs of betraying his boss. He soon learns that the Green Goblin has been the mastermind all this time, setting up the crime lords in a trap and is secretly responsible for Hammerhead's treachery, having been using him as a pawn to take down the other crime lords. Thus, this leaves the Green Goblin to take over New York as the new Big Man of Crime and laughs in triumph, much to Tombstone's dismay.

After this, he is never seen in the series again. It is unknown what happened to Tombstone since the series ended. There are possibilities that he is still at large, sent back to prison, or that he was killed off-screen by the Green Goblin. 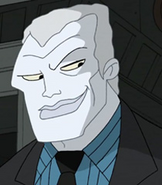 Tombstone using a punching bag to train his fighting skills. 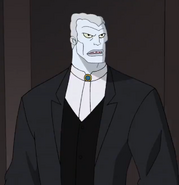 Tombstone after his bail

Tombstone left in dismay after the Green Goblin takes over his Empire right under his nose the whole time.
Add a photo to this gallery

Retrieved from "https://villains.fandom.com/wiki/Tombstone_(The_Spectacular_Spider-Man)?oldid=4042374"
Community content is available under CC-BY-SA unless otherwise noted.