Tomie Kawakami (in Japanese: 富江) is the fictional character who serves as both titular antagonist and protagonist of the Tomie movie and manga franchise.

Tomie is played by a different actress in each film. As such, this changing roster of faces has allowed for a range of interpretations and subtle shading to the part, the most popular being Miho Kanno, Miki Sakai and Miu Nakamura. Miho Kanno was Junji Ito's own personal choice for the role.

In the 2018 anime series Junji Ito Collection adapted from Junji Ito's works, Tomie makes her appearance in an adaptation of Painter and a two-part OVA adapted from the first two parts of Tomie. In the anime, she was voiced by Rie Suegara in Japanese version and by Monica Rial in English version.

Tomie's origins are shrouded in mystery for the most part. The Tomie move series implies that accounts of her date as far back as the 1860s in Japan and stretch into modern times. In the first issue of the manga one girl, Reiko, claimed to have been friends with her since childhood. Meanwhile in another chapter of the manga Tomie herself claimed to have been born in France and that her grandfather knew Picasso something which may be backed by her repeated requests for lovers to get her foie gras and caviar, however this is debatable as Tomie is noted by other characters to be a pathological liar and her tastes may simply be due to her self perception as royalty thus leaving the true origins of her and her powers as a mystery.

In addition to the original 20 chapter manga which ran from 1987 to 2000 (later collected as 3 volumes in 2001), there have been several animated OVAs and 9 live-action Tomie films to date.

This humanoid abomination can be seen as a living embodiment of lust, jealousy, greed, envy, and wrath. She is the ultimate self-destructive entity, yet she survives anything due to her regenerative ability. She is mercurial and sociopathic in nature exploiting people for her own amusement and entertainment before discarding them or being killed by them. Upon regenerating from her various deaths she will typically seek revenge on the perpetrator barring extraordinary conditions. She acts as though she is a noble with no one else's life being of any worth other than to serve her. She sees men as interchangeable and dumb accessories and as a habit tends to be dismissive of women unless they get in her way or can be used to her advantage. She is seemingly unused to rejection and those few extraordinary instances of individuals refusing her (usually due to the person having some sort of psychological trauma which prevents her seduction from taking hold) have typically lead to her first feeling shock, then to a short-lived obsession over the person, before finally causing her to revert to anger at not being able to turn the person. Her normal strategy is to manipulate others to do the killing and dirty work for her, however, she is not above taking care of matters herself especially if the victim is vulnerable or unable to retaliate. She is also noted to be a consummate liar a fact that she uses to her advantage. Though her clones are like-minded and capable of short term alliances for mutual gain or in the quest for vengeance they will typically turn on each other at the first opputunity in order to avoid having to "share". Ironically despite her weakness to fire at least one clone of hers was shown to have a fascination with fire and arson, though this may in fact be due to more to the suffering it inflicts on others or the fact of its scarlet color (which she greatly enjoys) rather than the act of burning itself.

In terms of appearence Tomie is a beautiful, typically dark haired (with the exception of the third manga Volume's cover in which she is shown as a red head), girl who can be identified by a mole under her left eye. She usually appears/ regenerates into a teenager age-wise however in at least one instance a duplicate spawned by her regeneration grew to be a young adult in her 20s.

Tomie possesses an undisclosed ability to make any human male she encountered fall in love with her. Through sleight of hand, or emotional manipulation, she drives these men into jealous rages over her affection that inevitably lead to brutal acts of violence. Her skill with emotional manipulation has been shown to work well on females too if she desires, as Tomie can easily sway women into being her friends only to pit them against each other with the resulting jealous frenzy leading them to kill each other. This ability to manipulate while useful has also resulted in her being killed time and time again by people she has driven to murderous rages, but she has survived regardless thanks to her regenerative abilities which allows her to quickly heal wounds and goes so far as to allow her to regenerate back after death from individual blood drops. Tomie's regeneration can be slowed but not negated by acid while in contrast it can be accelerated if she eats human flesh, something she is more than willing to do if conditions require it. Furthermore extreme emotional stress or emotional upheaval can cause her to instinctively spawn a duplicate which will bud off of her body perhaps as a kind of survival mechanism. Decapitating her will only result in two separate clones, one spawned from the head the other from the body.

Despite many attempts by others to kill her, most conventional attempts to end her horror have been less than successful with many more clones of her still at large. Only the total and complete incineration of a clone's entire body to the point of carbonization seems to permanently kill a Tomie's clone and as a result, it is used throughout the movie and manga series to dispose of her. Interestingly the movie Tomie: another face (1999) is a noted exception to this, as after one of her clones was shoved into an incinerator her ashes formed into a face in the air before her killers and claimed that each and every one of her ashes would grow into another Tomie. This exception, however, could have been due to a failure to totally burn every last cell remaining amongst her ashes, something which was shown in the manga chapter "Little finger" in which several severed fingers of a Tomie clone managed to regrow into complete clones despite being thrown into a campfire. Intriguingly that same manga chapter seemed to imply that Tomie's regeneration can be controlled or suppressed to a degree as one of the clones seemingly delayed her own regeneration to full health in order to gain the sympathy of one of her victims and upon finally receiving his confession of love the clone quickly healed herself and left him to die.

Implanting organs/pieces of her into others will result in one of several outcomes depending on their age and gender of the recipient: 1). In the case of women (and men in the movie continuity) whole organs and tissues implanted in them will attempt to regenerate into a full clone Tomie within their body and if not removed quickly the duplicate may burst out of the unfortunate's body much like the chest-burster stage of the Xenomorphs from the Alien movie franchise. 2). Cell infusions such as skin or blood will gradually turn a female victim into a clone of Tomie. If the female in question was around the same age as her the result will be a transformation of the victim into a normal clone. In contrast, if the cellular infusion was done to an infant the newly made clone of Tomie unlike in the other case is seemingly subject to the effect of aging and has to grow up like a normal human being. The movie Tomie vs Tomie (2007) implies this is due to the resulting child being an impure clone and having become infected with normal human cells from the host, a fact which may result in her body breaking down though such degeneration is not always the case. When it does occur this breakdown can only be counteracted by infusions of blood from a pure clone or the original herself, however, regardless of whether the imperfect clones are subject to degeneration all are subject to aging with the final chapter of the manga even going so far as to hint that one blood infusion transformed individual who had been imprisoned for decades in a block of cement by a vengeful former lover of Tomie's had not escaped before she became a withered old hag. 3). Hair samples are debatably the only known exception to the above mentioned rules of regenerating. Such samples will only replace the victim's hair before burrowing their way into the victim's skull and brain. In doing so the victim will briefly be able to communicate with Tomie and fall under her sway however the effects are temporary and ultimately fatal as the hair sample will eventually grow out of control and crush the victim's organs before emerging from them as a mass of hair. It is unknown if the mass subsequently will attempt to grow into a full clone of her.

The origins of her powers are mysterious as is how they operate but one issue in the manga implied that in addition to using other people's flesh as fuel for the process she may also be capable of turning specific kinds of energy (such as radiation) into bio-matter in order to aid in the process. In that issue, a Doctor upon discovering a kidney of a Tomie that had had been transplanted into another girl was attempting to regenerate into a full Tomie clone inside her tried to stop the process by removing the kidney and bombarding it with gamma rays only for the kidney's regeneration to be vastly increased instead. This may also imply that her powers are partially fueled by the absorption of background radiation.

Her only seeming weakness beyond total incineration appears to be in the form of the photographs which is especially ironic given her vain nature. Initially, she was seemingly unaware of this fact and it wasn't until the first time someone tried to photograph her extensively that she realized the truth. As she and the photographer discovered for reasons unknown the developed photographs will typically show the true extent of her inhuman nature in the form of a horribly distorted image of her featuring a second malformed and ghoulish looking head growing out of her normal human one. The reason for this phenomenon is unknown but it may be indicative of the fact that while the humans are easily distracted and biased by what they believe to the point they may miss something right in front of their eyes, camera lenses are incapable of bias and thus are not fooled by the act a being like Tomie puts on, something that allows them to perceive a person's soul (per certain beliefs) and thus capture proof that she is a "two-faced" monster in the truest sense of the phrase. 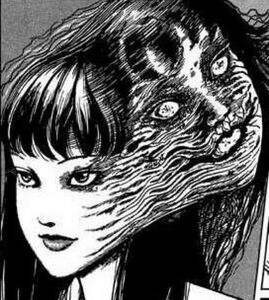 Retrieved from "https://villains.fandom.com/wiki/Tomie_Kawakami?oldid=3921500"
Community content is available under CC-BY-SA unless otherwise noted.