Soldato in the Salieri crime family

Assist the Salieri crime family in their takeover of Lost Heaven (succeeded).

Give information about Ennio Salieri and his crime family to Detective Norman in exchange for his family safety (succeeded).
Avoid getting killed by other gangsters for Ennio Salieri's incarceration (failed).

Thomas "Tommy" Angelo is the villain protagonist in Mafia: The City of Lost Heaven and it's 2020 remake Mafia: Definitive Edition. He reappeared as a minor character in Mafia II. Tommy worked for the Salieri Crime Family in Lost Heaven, Illinois. However, after the ending of Mafia I, Tommy ratted out the Salieri Crime Family to the Feds and went into exhile in Empire Bay, New York. Because he ratted to the Feds, Vito Scaletta and Joe Barbaro, from the Falcone Crime Family in Empire Bay are ordered to assassinate Tommy.

He was voiced by Michael Sorvino in the original game.

Tommy started out as a cab driver on the streets of Lost Heaven during the Prohibition, and despite the little money he made on the job he was grateful to be working, especially as it was during the great depression. Little else is known about his backstory, although it is implied he may have served in the great war during the 1910s.

In the autumn of 1930 Tommy is working a shift at his cab company when he is taken at gunpoint by mobsters Paulie and Sam, who are on the run from rival gangsters working for the Morello crime family. Tommy manages to help them evade the mobsters in his cab, and takes them back to their family's headquarters Salieri's Bar. Sam gives Tommy payment to help fix his car, revealing that their boss Don Salieri is grateful for his help, and that if he needs anything (such as employment) to come to them. Tommy thanks Sam, although at the time doesn't intend to take up the offer as he doesn't want to work with criminals. He fixes his car and resumes back at the cab firm, intending to put the whole situation behind him.

The following day when resuming his shift, he is attacked by Morello's men as revenge for Tommy helping Salieri's men. Tommy escapes their wrath and heads to Salieri's Bar, where his men kill the two Morello mobsters pursuing Tommy. After Tommy is fired from the cab firm due to his association with the mob, Tommy has a change of heart and accepts Don Salieri's offer of employment, especially as it would help guarantee his safety. Tommy has a meeting with Don Salieri who explains the rules to Tommy about the criminal life. He allows Tommy to get retribution on Morello's men by heading to their bar and destroying their cars.

Tommy acts as a driver for Paulie and Sam when they are collecting protection money for the family. They head to a motel outside town to collect protection, but are ambushed by thugs working for Morello, which causes Paulie and Sam to be injured. Tommy saves Sam from the motel, and chases down a Morello goon trying to make off with the money, which results in the goon being killed and Tommy retrieving the money.

Two years later, Tommy assists in rigging a race to guarantee that Salieri's man would win, as this person winning guarantees the family and other people in the neighbourhood winning a bet and making a lot of money. Tommy has a car belonging to a rival racer sabotaged to make sure he doesn't win the race. Despite his work, Salieri's man is fatally injured in an "accident" which means he can't race. Due to Tommy's experience as a cab driver, he is called upon to fill in as the racer and to help win it. Tommy succeeds in doing so, and is celebrated.

Tommy is asked by family barman Luigi to escort his daughter Sarah home, as she has been harassed by thugs in the area. Tommy accepts and walks Sarah home, but along the way they are ambushed by the men. Tommy manages to fight off the thugs but is hurt in the process, and a grateful Sarah takes him to her apartment to get him cleaned up. The pair become share an attraction with each other and end up having sex, and Tommy falls in love with Sarah and intends to spend the rest of his life with her.

The following day Tommy informs Don Salieri on what the thugs in the area have done to Sarah, as well as them harassing other innocent people. An enraged Salieri sends Tommy and Paulie to deal with the thugs, which results in one of them being killed by Paulie. This has unfortunate implications as the killed thug is the son of the city Councillor.

Salieri's friend and Consigliere Frank tasks Tommy with killing a prostitute at the Corleone hotel, as she has been feeding information to Don Morello and losing the Salieri money and men. Tommy ambushes the hotel and infiltrates her hotel room, only to find the woman is a friend of Sarah. Tommy can't bring himself to kill her, so instead orders her to leave town and never return, which she accepts. Tommy then rigs the hotel to blow and escapes along the rooftops before it detonates. He ends up in a nearby church, which is holding a funeral for Sarah's harasser. A shootout occurs and Tommy kills the guards. He then gives money to the priest to help fix the church.

It is revealed that Frank Colletti has turned informant and has given information about Salieri's operation to the state. Salieri believes that Frank must have good reason, but nonetheless he must be killed as he betrayed the family. He sends Tommy to do the job, and Tommy tracks down Frank to an airport. He takes out agents guarding Frank, but Frank reveals that the agents had kidnapped his family and used them to force him to give evidence against Salieri. Tommy saves Frank's family, and although Frank has accepted that he needs to die, Tommy instead allows him to leave the country with his family and start a new life. Tommy makes up a story that he did kill Frank and has disposed of his body. The family believe him, and a funeral is held without Frank's body.

After Morello's mobsters fail to kill Salieri, Tommy retaliates by taking part in a hit to kill Morello's brother Sergio Morello Jr. After numerous failed attempts to kill Sergio, Tommy manages to chase him down to a dock and assassinate him. This results in the Morello crime family being crippled. Tommy, along with Paulie and Sam, track down Don Morello and assassinate him, ending the Morello crime family and giving the Salieri crime family the power in Lost Heaven's criminal underworld.

Don Salieri tasks Tommy, Paulie and Sam with stealing a shipment of cigars coming in. Tommy is suspicious about why Salieri is so interested in a shipment like this as it is beneath him, but accepts the job anyway. After hijacking a delivery truck coming out of the port, Tommy uses it to gain entrance and loads up the creates of cigars. He and Paulie drive it to a warehouse owned by Salieri, and when examining the boxes discover that it doesn't contain cigars, but in fact diamonds. The pair of them wonder if Salieri is aware of this. When Tommy asks Salieri if he wants them to unload the boxes, Salieri quickly dismisses them doing it, confirming to Tommy and Paulie that Salieri is aware and hiding the truth about the shipment.

The following day, Tommy meets Paulie at his apartment to discuss a deal that Paulie wanted to propose. which will earn them a lot of money. Tommy and Paulie plot to rob a bank as a side job, although don't want to inform Salieri on it, feeling that he has been messing with them. Tommy and Paulie hit a small time bank and retrieve a lot of money in the vault, and manage to evade the authorities.

Unfortunately the incident is discovered by Salieri, who has Paulie killed. Tommy comes across Paulie's body when visiting his apartment, and that the money they made is missing. Sam phones the flat and warns Tommy about Salieri being onto him, and tells him to meet at the art gallery so they can work out a way helping Tommy to escape. Tommy heads to the gallery to meet Sam, only to have mobsters pointing guns at him, and Sam revealing himself as the traitor. Sam lectures Tommy for his actions, and orders his men to kill him. Tommy manages to shoot down Sam's men and begins to chase him through the art gallery. The two men begin to shoot at each other, and Sam reveals that he has other knowledge about Tommy's misdemeanors towards the family: such as not killing the prostitute years prior and not killing Frank. Sam reveals she returned to the city and the family discovered the truth, and Sam had her killed. Tommy manages to shoot at Sam, fatally wounding him. Before Sam can escape, Tommy subdues him with another gunshot. A weakened Sam warns Tommy that he won't be able to evade Salieri forever, and reveals that Frank was tracked down and killed, and that Tommy only extended his life rather than save it. Tommy finishes off Sam with more gunshots, before then exiting the gallery.

After the incident, Tommy gathered Sarah and their daughter and left the country. Realising that he won't be able to go on the run forever, Tommy decided to return to the United States to set things right.

In 1938 Tommy testified against the Salieri crime family in order to protect himself and his family. Many of the thugs were imprisoned and got the chair, and Salieri himself got life in prison. Tommy was made to serve eight years in a confined cell for his own protection. He was released in 1946 and reunited with his wife and daughter, and they were moved to Empire Bay with new identities. Tommy took up a job with a cab company in the city.

In 1951 – 13 years after betraying the Salieri family - Tommy watered his garden until two men pulled up at the side of the road and got out. The two men approached Tommy and asked for "Mr. Angelo". Tommy replied "yes" and one of the men replied "Mr. Salieri sends his regards". The other man pulled out a gun and shot Tommy point blank in the chest. As Tommy lay on the ground dying, the two men got into their car and pulled off.

As the player character and protagonist he appears in all of the missions. 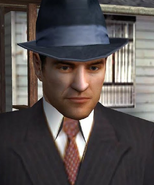 Tommy in the original Mafia 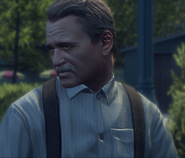 An older Tommy in the Mafia II mission "Stairway to Heaven"

Retrieved from "https://villains.fandom.com/wiki/Tommy_Angelo?oldid=3762179"
Community content is available under CC-BY-SA unless otherwise noted.