Telling tall tales.
Assaulting and killing anyone who annoys him.

Become a "made man" in the Mafia (failed).

Thomas "Tommy" DeVito is the secondary antagonist of the 1990 film Goodfellas.

He is a cruel associate of the Lucchese crime family and arguably the most feared member of the crew led by Jimmy Conway.

The character was portrayed by Joe Pesci, who also played Frankie Monaldi in Once Upon a Time in America, Mr. Big in Moonwalker, Harry in Home Alone and Home Alone 2: Lost in New York, Nicky Santoro in Casino, and Ronald Grump in Sesame Street.

Tommy DeVito was first employed as a shoe-shine boy to the neighborhood mobsters, earning the nickname "Spitshine Tommy" - an alias that he came to despise as he grew older. Tommy would soon become a longtime associate of fellow gangster Jimmy Conway and their crime boss Paul "Paulie" Cicero. After graduating from this position, Jimmy recruits him into his gang and introduces him to new recruit Henry Hill; the two became close friends over the years, both being employed in offloading hijacked trucks and fencing the stolen cargo. Of the two, Henry is the first to get arrested over the course of their work.

As the years go by, Tommy moves from fencing contraband to hijacking trucks alongside Jimmy himself, his fearsome temper and aptitude for violence making him a valuable member of the team. However, Jimmy is also hoping to eventually exploit Tommy's potential as a future Made Man: having two Sicilian parents, Tommy is the only one of the gang eligible for Mafia membership, and the "license to steal" it could offer to Jimmy's gang. Unfortunately, by 1963, Tommy's temper has grown to almost uncontrollable levels, making even the simplest of conversations a minefield for Henry and the others: after hearing an admittedly funny anecdote of one of Tommy's past arrests during a party at a local mob hangout, Henry innocently remarks that Tommy is "a funny guy" - only for Tommy to get angry and start demanding explanations. Then, no sooner has this confrontation been defused, Tommy goes so far as to assault the club's manager and a waiter over a minor disagreement, and then put a gun to Henry's head as a joke.

However, Tommy's skills are too valuable for Paulie to discipline him: quite apart from helping Henry secure over a million dollars in the Air France heist, he still brings in regular tributes from hijacking - not to mention burning the club down so Paulie can profit from the insurance money - so little can be done to stop him.

In 1970, Tommy attends a welcome-home party for recently-paroled mobster Billy Batts at Henry's bar, the Suite; though the situation seems relatively cordial at first, Batts then begins needling Tommy over his past as a shoe-shine boy, mockingly referring to him by his hated nickname and quickly provoking an explosive temper tantrum that forces Henry to usher him out of the bar. Once the other party guests have left, Tommy returns to the bar with a revolver and proceeds to beat Batts apparently to death, with Jimmy helping to kick the mobster unconscious and Henry watching the door. Immediately afterward, the three of them have to dispose of the body: Batts is a Made Man in the Gambino Family, and killing him without permission from his superiors would be punishable by death. After stopping by at Tommy's house to pick up a shovel and chat with his mother, they drive on to a grave site somewhere in the woods - only to find that Batts is still alive; Tommy immediately stabs him at least nine times in the chest with a butcher knife, and Jimmy empties his revolver into him for good measure, before the three of them unceremoniously bury him in the woods. Several months later, the land is sold to make way for condominiums, forcing the three of them to exhume Batts' badly decomposed corpse before it can be found by the construction workers - Tommy spending most of the exhumation doing his best to make Henry throw up.

After the Billy Batts incident, Tommy's viciousness continues to escalate: during a game of cards at a mob hangout, Tommy orders a drink from the bartender, Spider, only for the young mob associate to mishear him. Over the course of the argument that naturally follows, Tommy draws a gun and orders the bartender to dance for him, before shooting him in the foot. At the next card game, Spider returns to work with his foot in a plaster cast, prompting instant mockery from Tommy; this time, however, Spider retaliates with a remark of "why don't you go fuck yourself, Tommy?" Jimmy is immediately impressed by the bartender's boldness, rewarding him with some money and playfully teasing Tommy for not losing his temper - which unfortunately results in Tommy losing his temper and fatally shooting Spider several times in the chest.

Following Henry and Jimmy's stint in prison, Tommy joins them in Henry's profitable new drug-dealing business, making millions in profit - all under the nose of Paulie Cicero, who has specifically forbidden narcotics trafficking for fear of attracting federal attention. However, this is soon eclipsed by Jimmy's latest plan: the Lufthansa Heist, which brought in over $5,000,000 in cash and $800,000 in jewelry. Unfortunately, getaway driver Stacks Edwards gets stoned and fails to dispose of the getaway truck, eventually resulting in the police getting hold of it. As such, Tommy is sent to pay Edwards a visit before he can be arrested - the "visit" ending with the getaway driver being shot in the head with a silenced pistol. Later, Morrie, a wig salesman, and bookie who had alerted the gang to the profitability of Lufthansa, begins pestering Jimmy for $500,000 finder's fee; unwilling to part with the money and unwilling to risk him going to the cops, Jimmy simply has Morrie killed - Tommy stabbing him through the back of the head with an ice pick. Other members of the gang begin making profligate and extravagant purchases with the stolen money, threatening police attention and prompting Jimmy to have them assassinated one by one, Tommy presumably being the hitman of choice. In the end, Jimmy is unwilling to share the Lufthansa profits with anyone except the higher-ups among the Ciceros, ultimately leading to him having almost every single member of the gang eliminated. Only Henry and Tommy are spared: Henry because the drug-dealing business is still immensely profitable, Tommy because he is now in line to be Made.

In January 1979, Tommy is picked up by two Mafia lieutenants and escorted to a house where he will be Made and inducted into the ranks of a Mafia Crime Family; elsewhere, Jimmy and Henry celebrate, believing that Tommy's promotion will allow them all a chance to take the gang and its profits to the next level. Unfortunately, it turns out that the ceremony is a setup: the Mafia simply take Tommy into an empty room, allowing him barely enough time to realize the danger before shooting him in the back of the head, killing him instantly. As it happens, they'd discovered the truth behind Billy Batts' "disappearance" sometime prior to the ceremony, and ordered Tommy's execution as punishment for murdering a Made Man without permission. As such, Jimmy's horribly depleted gang is left without its muscle and its license to steal, and Tommy's mother is forced to give her son a closed-coffin funeral. Judging from his behavior, however, it's possible that Tommy got whacked for his reckless nature as Jimmy suffered no on-screen punishment for his role.

As a gangster, Tommy has a suave, calm and attractive personality. His confidence coupled with his sense of humor make him the life of the party. Despite this, he is extremely cruel, ruthless and foul-mouthed. Perhaps his most distinguishing feature is his monumental temper. Tommy will explode for almost any conceivable reason, whether for the sake of venting his spleen or simply for the sake of terrifying others. He seems to have no real sense of respect for others except for his friends and family, and will beat, humiliate, or downright kill anyone who does something slightly annoying, embarrasses him or insults him in the slightest. Believed to be suffering from a 'Napoleon complex', due to his short stature, Tommy is not shy about using violence to retaliate against insults - real or imagined - and will kill without remorse when provoked. His truly psychopathic nature can be seen when he shoots Spider out of anger for his insult towards him, even though Spider had been shot in the foot by Tommy and subsequently insulted by him in relation to this fact. This murder was enough even for Jimmy to protest him, going so far as to call Tommy "a sick maniac". His treatment of Spider also shows that Tommy shows little respect towards those of a lower class. Given that this is the reason he murdered Billy, this makes his treatment of Spider even worse. Tommy's only redeeming trait aside from caring about his friends is his love for his mother. He never disrespects or loses his temper towards her throughout the movie. His treatment of her also meant she never knew of his life as a gangster considering he tried his best to make sure she never found out. It's not until his death that she could have known. 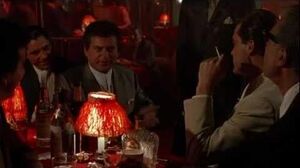 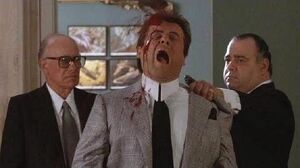