Bully Sonny Quinn and Sam Carter or other school people

Tommy Madigan is a bully and a minor antagonist in Goosebumps 2: Haunted Halloween.

He was portrayed by Peyton Wich, who also played another bully named Troy in the first season of the Netflix series Stranger Things.

He studies at the same college as Sonny Queen and Sam Carter. With two friends of his, he likes to bullies them whether in or out of college. When Sam and Sonny clean up an old, abandoned house and find Slappy, Tommy and his gang come out, manages to steal the R.L. Stine book and get the dummy off by mocking them. To avenge them, Slappy, with his powers, lowers Tommy's pants in front of his friends and protagonists which causes his humiliation. He tries to pull it up but he falls again, leaving Sam and Sonny time to escape with Slappy. Tommy then pursues them and Slappy once again uses his powers to extend a garden hose in the middle of the road, knocking out the bullies.

He is seen later throwing toilet paper on trees with his friends while Slappy brings the halloween monsters to life. To stop the slaughter, Sonny, Sam and Sarah, Sonny's sister, must retrieve the book. Tommy informs them that it is at home and that's when three witches encircle the three brutes. Tommy first thinks they are costumes, but he panics when his friends get kidnapped by the witches before being kidnapped in turn. The protagonists must then look for the book without him. He's seen one last time, at the end of the film when Slappy and the monsters are defeated. He falls from the sky (probably in the possession of witches all this time), having lost his memory. He then sees Sonny and Sam and tells them he is happy to see them. Even if it's the only time he's friendly with them, Tommy still must have remained a jerk and bully despite the events.

Tommy and his friends at school 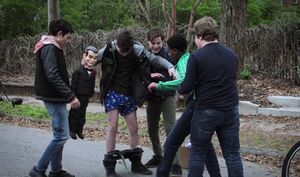 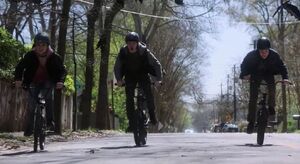 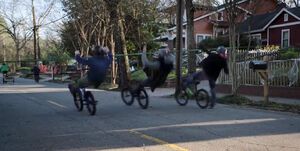 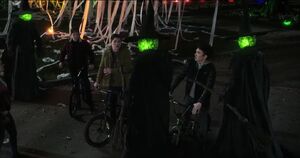 The bullies are about to get kidnapped 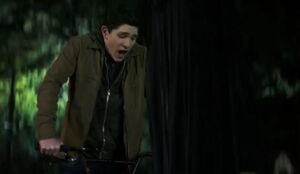 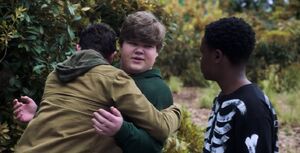 Tommy eventually reforms at the end