Villains Wiki
Register
Don't have an account?
Sign In
Advertisement
in: Juvenile Delinquents, Kidnapper, Friend of a Hero,
and 17 more

Thomas "Tommy" Tammisimo is a minor antagonist in the 1999 horror thriller film The Sixth Sense. He is essentially a bully who believes he is above everyone else, especially main protagonist Cole Sear. However, his actions go beyond the actions of a typical bully.

He was portrayed by Trevor Morgan.

Tommy Tammisimo is introduced as a "friend" that Cole's mother set up to have her son get social interaction. Tommy acts nice around Cole when his mother is watching, but then proceeds to abandon and verbally abuse him when alone. Cole tells Dr. Crowe later in the movie that Tommy openly hates him.

During a birthday party, Tommy and the birthday boy attack Cole and lock him in a small cellar, unknowingly trapping him inside with an angry, violent ghost. Despite Cole's pleas for help, the two do not free him. Cole only escapes after his mother arrives to help him, but still faints.

Tommy is shown acting in school plays, but openly criticizes them. Cole says that Tommy acted in a cough syrup commercial, and that's why he sees the kid actors as amateurs and beneath him, despite only having one line in the commercial. Tommy's commercial is shown on television later in the film, and Cole angrily throws a shoe at the TV, switching it off.

Towards the end of the film, Tommy is last seen acting in a children's version of King Arthur. He (obviously unhappily) plays the Village Idiot, while Cole plays Arthur. 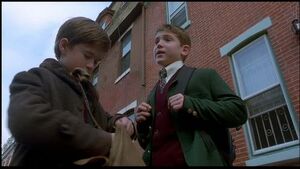 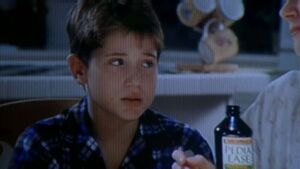 Tommy acting in a commercial

Tommy about to attack Cole