Compell an emotional reaction from young Lucy (succeeded indirectly, but at the cost of their own lives).

Tomoo's Partners are a duo of children that were minor, but ultimately significant antagonists in the anime and manga Elfen Lied, making their anime debut appearance in the eighth episode of the anime. Led by another child named Tomoo, they tormented and made the young Kaede (better known to most readers/viewers as Lucy after she snapped, though this only became her name much later) to the point of being miserable while they were all at the same orphanage, which was located in or near the seaside town of Kamakura, Japan.

Young Lucy called it a place of misery where other miserable children sought out anyone more miserable than themselves. Arguably, the dismissive and contemptuous attitude she received from the teachers and staff there further encouraged the bullying. While most there either taunted or isolated Lucy, Tomoo and his gang were the worst and most persistent. When young Lucy shut herself down emotionally to deprive her taunters the pleasure of seeing her pain, this only increased her isolation and made Tomoo determined to get a reaction from her. Unknown to anyone, outside the grounds of the orphanage, Kaede/Lucy had found a stray puppy and started to take care of it. As such, the puppy was the only one that satisfied her need to love and be loved in that place.

One day, after Tomoo spilled sour milk in Lucy's backpack, one of Tomoo's buddies knocked Lucy down, till a girl nearby threatened to call a teacher to stop Tomoo. As the two departed with Tomoo, the girl made an offer of friendship to Lucy, offering also to keep her secrets. Desperate to feed her growing puppy, and running out of food for herself as a result, Lucy showed the girl the puppy. The girl promised to help feed it and keep the secret of its existence from people like Tomoo, even directly indicating what might happen to the pup if it was found out.

However, not long after, Tomoo appeared before Lucy and reveled that he had found the puppy, as he along with his buddies held it in front of her. When it became clear he meant to harm it, the girl appeared and said she would never have told him about the puppy had she known he would hurt it. She apologized to an angry Lucy, but evidence in the series exists that she befriended Lucy for the sole purpose of betraying her trust.

While his two hench-boys held Lucy's arms, Tomoo, with a grin on his face proceeded to beat the pup to death using a rock (in the manga) or a vase (in the anime). He further taunted Lucy by sarcastically saying he was sorry the puppy hadn't held out longer. Looking over at the girl who she had briefly believed was her friend, Lucy saw her covering her face, supposedly in horror at the puppy's death, but with eye-spaces to peek through, and a small smile on her face. The source of this smile, whether glee or nerves, is as much a matter of debate as her reasons for revealing the puppy's existence, but both indicate that she was possibly a partner of Tomoo.

These children were unaware that they had only seconds to live.

For Lucy, this was the last straw, and in rage, she unleashed a power she hadn't fully known she had - invisible arms made of telekinetic force. Screaming out that they were the ones who weren't 'real people', Lucy killed all four children and then left the orphanage forever, pausing only to bury her puppy and apologize for not being able to protect it.

Tomoo and the other bullies (including possibly the girl, assuming she wasn't just loose-lipped) created a monster that day, and the rage in Lucy's heart would kill many thousands of people, including, sadly, the family of the only boy she ever loved, not long after this incident, spurred on by the mistrust the bullies had placed in her heart. In moments of doubt and pain, Lucy would sometimes hallucinate and see the horribly mutilated bodies of Tomoo and the girl taunting and teasing her yet again. The hench-bullies were not part of these hallucinations.

While the direct responsibility for turning Kaede into Lucy rests with Tomoo, and possibly the girl, assuming she was involved in a plan, the other bullies are responsible for helping Tomoo's actions, and they seemed to have no qualms in doing so. Personality-wise, they were not distinct in any way from Tomoo, almost being like additional arms to him. As their actions show, an unthinking follower can be a villain just as much as a schemer and plotter can.

The first of Tomoo's henchkids is about as big as Tomoo himself is. He has a white T-shirt and green cargo shorts. His hair is dark brown and short.

The last bully also matches Tomoo himself in size. He has the same hair that Tomoo does, only slightly smoother and longer. His outfit consists of a pink shirt and blue jean shorts.

The bullies' death in the manga 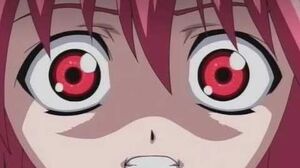