Villains Wiki
Register
Don't have an account?
Sign In
Advertisement
in: Mature, Partners in Crime, Anime Villains,
and 26 more

Ton, Chin, and Kan are voiced by Yamamoto Itaru, Genki Muro, and Daiki Yamashita respectively in the Japanese version of the anime adaptation. In the English version, the three thugs are voiced by Chris Tergliafera, Lucien Dodge, and Arnie Pantoja respectively.

Camberley (Kan), Gaston (Ton), and Rachins Hoffman (Chin) were the names of three petty criminals who operated in the streets of Lugunica, the capital city of the Kingdom of Lugunica. The trio of thugs would stalk the back alleys of the bustling streets, hoping to steal the valuables of any unfortunate individual they deemed as prey.

One day, while patrolling the back alleys like usual, the thugs came across the Japanese teenager Subaru Natsuki who had just been inexplicably teleported to their world. They tried to mug Natsuki, however, the Master Swordsman Reinhard van Astrea arrived, prompting the three men to flee in terror.

Eventually, the street thief Felt became a candidate to rule the nation of Lugunica. Hoping to build a following of like-minded individuals, Felt recruited the three thugs into her political faction. Under the supervision of Reinhard, the three lowlifes grew more capable in terms of combative abilities. 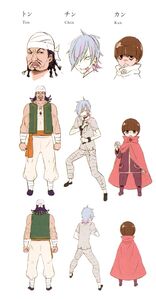 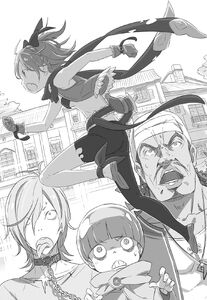 The three thugs watching Felt run past them with incredible swiftness. 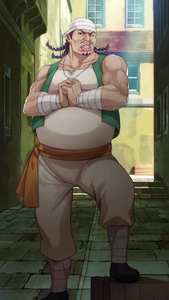 Ton in Re:Zero − Starting Life in Another World: INFINITY. 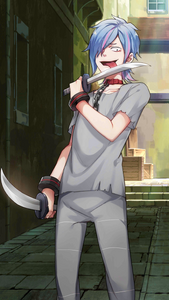 Chin in Re:Zero − Starting Life in Another World: INFINITY. 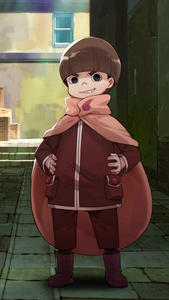 Kan in Re:Zero − Starting Life in Another World: INFINITY. 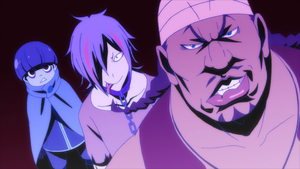 Ton, Chin, and Kan in Redo, the first opening of the anime adaptation's first season.