Leader of the Croc Bandits (sometimes)

Attempting to kill Po.
Being unpredictable to his enemies.

Be better than Tong Lo, his grandfather, at being a villain.

Destroy the Valley of Peace.
Have Shifu imprisoned permanently.
Get back the money he lost to Shirong.
Kill Po (all failed).
Save China from Pang Bing (succeeded).

Tong Fo is a recurring antagonist in Kung Fu Panda: Legends of Awesomeness and the one of the very few people who can give Fung orders.

Tong Fo, despite his misleading looks, is a ruthless, diabolical and violent crime lord, wanting to cause mass destruction and kill Po many times. He is very sadistic, wanting to kill Po in horrifying ways, such as having his head literally explode and blackmail his friend to fight him to death. He is also intelligent, shown by his tactics when he plans things to go to action, such as taking the Shift Stone and taking the form of a prison guard before locking up Po, or blackmailing Peng by threatening the life of his girlfriend, Lian, before being captured, creates a replica of the Sacred Hammer of Lei Lang and hiding the real one in Camelback Mountain. He is even smart enough to know he really should help Po to keep his free will, although it is really unknown if he did it for pragmatic reasons to keep his free will, or out of altruism. Despite his extremely evil nature, he is socially awkward, pausing, emphasizing words that shouldn't be emphasized and staring into other people's eyes for an uncomfortably long period of time. However, it really doesn't count as an insecurity. Also, he was actually once honorable, letting Shirong go when he was satisfied he caught Master Shifu rather than Po, only threatening him to submit to him if he doesn't leave. However, that is all lost when he was the first villain to betray Po, to which the others follow in the finale, even though Po let him escape.

Tong Fo is a cute, yet malicious loris who appeared in the episode "Jailhouse Panda". Shifu explained to Po that, years ago, Tong Fo got hold of a powerful and destructive weapon known as the War Hammer of Lai Lang. He was stopped by the Furious Five, but the weapon was revealed to be a fake, and Tong Fo has hidden the real weapon somewhere, meaning that he would find if he escapes. Po uses a shift stone to disguise himself as a wanted fugitive and heads to Chor Ghom Prison, where Tong Fo is held captive. At first, Tong Fo buys Po's disguise, but then realizes he is actually the Dragon Warrior. He steals the shift stone and uses it to disguise himself as a prison guard and escapes.

Po escapes with the help of Tong Fo's henchmen and then runs off to find Tong Fo. Meanwhile, Tigress and Monkey find out about the escaped fugitive (who was actually Po), and track him down. Tong Fo and Po arrive at Camelback Mountain, where the war hammer is hidden. Tigress and Monkey arrive and battle Po, believing him to be a fugitive. Po manages to prove to them otherwise by telling them their secrets. Tong Fo emerges from a nearby cave with the war hammer, he then breaks the shift stone, turning him and Po to normal. Po, Tigress, and Monkey fight Tong Fo and his henchmen. Just as they get defeated, Shifu stops the crooks revealing to have used a shift stone to disguise himself as one of Tong Fo's henchmen. 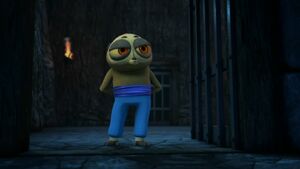 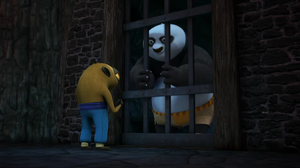 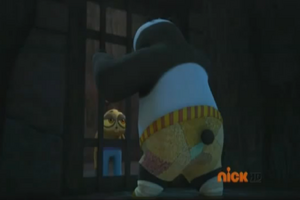 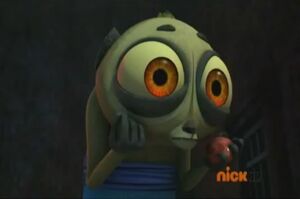 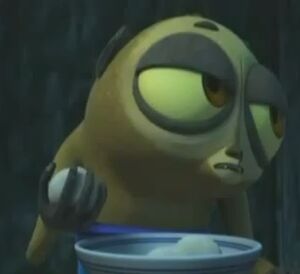 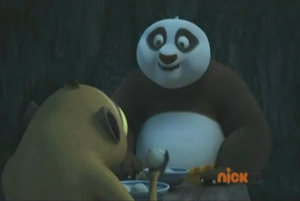 Tong Fo having dinner with Po. 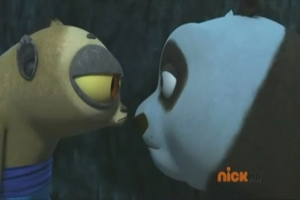 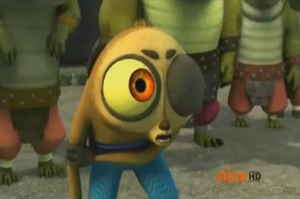 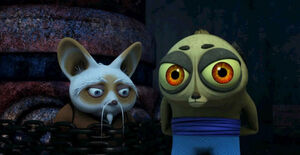