To brutally beat those who oppose him (failed).

To escape from David Sloane (Suceeded)

Use and abuse of illegal techniques in the ring

Tong Po is a ruthless and brutal Muay Thai champion and the main antagonist of the 1989 Jean Claude Van Damme film Kickboxer.

He was portrayed by Michel Qissi.

Tong Po was a ruthless and sadistic fighter, as well as a heartless and cold-blooded killer. He reveled in the violence he inflicted on his opponents and never felt he truly won unless they were beaten, broken or dead.

Tong Po is the long time undefeated Thai Champion and enforcer for local mob boss Freddy Lee. When American Kickboxing Champion Eric Sloane and his younger brother Kurt arrive in Thailand as a first step to taking on the world's greatest after Eric has beaten the best in America, Kurt is the first one to witness both Tong Po's horrifying strength, skill and truly cruel and sadistic nature as he's warming up by kicking and solid pillar with his legs, causing plaster to fall from the ceiling and denting the pillar.

Horrified, Kurt begs Eric not to fight Tong Po, But Eric's pride and over confidence wins out. But no sooner does the match begin, Po maliciously brutalizes Eric with a series of moves illegal in the States after receiving ineffective blows from Eric. Eric is instantly floored in the second round. But even when Kurt throws the towel in to stop the fight and save his brother's life, Po kicks it out and heartlessly smashes his elbow into Eric's back, breaking his spinal cord and leaving him never able to walk again.

During the course of his training, Kurt falls in love with Xian's daughter Mylee. Eventually Kurt even surpasses Eric in skill.

Tong Po and Freddy Lee send a formal request to Kurt's challenge, If only they fight in an ancient way which means hands wrapped in rope, covered in broken glass. Kurt accepts despite Mylee's fear and Eric's protests.

However, Tong Po has his men bring Mylee to him, Where he sadistically rapes her to infuriate Kurt. However Mylee keeps the assault a secret to keep Kurt's mind clear for the fight.

To tip the scales more in his favor, since he's bet a million dollars on Po to win. Freddy Lee has his men kidnap Eric.

On the night of the fight, Freddy Lee tells Kurt to let Po beat him in all the rounds or else they'll execute Eric. The fight begins and with both their hands wrapped in glass, Tong Po takes great pleasure in savagely beating and slashing Kurt to a bloody mess. Even telling him the sheer pleasure he had in raping Mylee.

Fortunately, Xian and Taylor rescue Eric and upon seeing his brother safe, Kurt's spirit is renewed and after having Mylee cut his ropes, He unleashes all skill and strength on Po, completely beating him senseless. The fight ends with Kurt launching Po out of the ring and finally knocking him out against a pillar and then Kurt finishes the job by knocking out Freddy Lee with a kick to the face.

Sadly, While victory was won, A happy ending was not to be.

It is learned that while consumed with humiliation and rage, Tong Po had gunned down Kurt, Eric and Mylee in revenge when they were about to return to America.

This however did not sit well with Sangha, One of Po's Managers who is a partner with Justin Makia who runs the UKA Kickboxing federation in America, Because they had been seeking a rematch to regain honor.

When they learn of David, Kurt and Eric's youngest brother and only one left of the Sloan family, They plot to regain honor by getting David to fight Tong Po.

After a series of schemes, which includes burning down David's gym while an innocent boy is inside ( David could not save him because the ones burning the gym broke his leg.), the final trap is using David's old student Brian.

Brian (who's already made a name for himself in UKA) is suppose to fight a fellow UKA fighter for the Championship. But through Sangha's planning, the fighter is told he's been replaced due to illness, which he is not. Tong Po instead enters the ring, Much to the horror of Xian, who had come to train David, and the officials because Po is not registered to fight in the country. But despite protests, Sangha's men warn them off.

The fight begins and Po beats Brian brutally and bloody despite the ref's objections to illegal moves. But even the ref is attacked and thrown out of the ring by Po who continues to heartlessly beat Brian in spite of David's attempts to stop the fight. Tragically Brian dies in the ring.

With no choice but to accept Tong Po's challenge, David prepares in the same ancient way Kurt did with his hands wrapped in glass. He meets Po in the ring with Sangha video taping the fight to show Thailand they regained honor. First round goes to Tong Po after brutal beating where he calls David the weakest of all the Sloanes.

But remembering Xian and his own words of wisdom, David gains second wind and pummels Tong Po with a vengeance. Defeating him and avenging Kurt, Eric and Brian. He also inflicts similar justice on Sangha after pulls a gun on him. 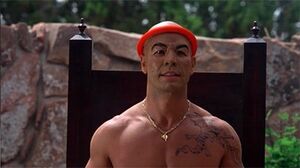 Tong Po
Add a photo to this gallery