Kill Hiryu who is a threat to Meio's creation of new world order.

Tong Pooh is an antagonist and a recurring character in the Strider series. She debuted in the first Arcade game and has returned as a recurring enemy in all its follow-ups and even some crossovers, making her the second character with more exposure in the series, besides Hiryu himself.

Seeing how she was slowly growing in popularity, despite being an antagonist, she was granted several appearances in crossovers, such as being an assist in Marvel vs Capcom and a boss in Namco x Capcom and Project X Zone 2.

Tong Pooh is the middle sister and leader of the bounty hunter and assassin trio known as the "Kuniang Martial Arts Team" (rebranded "The Four Winds" or just "The Winds" in the 2014 Strider), formed by her and her two sisters Pei Pooh and Sai Pooh. She's recognized by her green clothing and her twin-braided pig tails. The sisters have a worldwide reputation as a fearsome fighting team, using their combined technique to eliminate their targets. In Strider 2, the trio is said to keep appearances in public by having a cover job as members of an acrobatics troupe.

In the first game, the Kuniang M.A. Team was hired by Grandmaster Meio to eliminate Hiryu, after he brought down the higher-ups at Kazakh. Alongside fellow bounty hunter Solo, who tried to kill him at a previous point, they ambush Hiryu in the Sky Thunder MK-II, a flying airship Hiryu attempted to take over. Coming out victorious, Hiryu confronted the trio and asked them to take him to their boss, but Tong Pooh instead calls him an idiot and assures him they control the world for as long as the Battleship Balrog exists. After learning about its existence, Hiryu leaves the trio behind, only to assault and destroy the flying fortress by himself.

In Strider 2, the Kuniang M.A joins the Chinese Mafia in a terrorist attack on Neo Hong Kong, possibly orchestrated by the Light Sword Cypher organization. Hiryu engages the trio in the high society residential area, on a highway crowded with flying cars. Jumping from car to car, he defeated the acrobatic assassins once again. Following the destruction of the mafia's powerful "Emperor Dragon" machine, a wounded Tong Pooh taunts Hiryu with his foolishness in believing he can take on her Lord and that the whole world, Hiryu included, belongs to him. He simply retorts her by saying she will always be Meio's servant, calling her a "whipped dog" in Japanese, and leaves her behind.

In the 2014 Strider, Tong Pooh returns as the leader of the trio now known as the "Four Winds". Having been trained by the mysterious (and possibly mother) martial artist Xi Wang Mu, Tong Pooh managed to master the sword aspect of her fighting style. Using a single chinese Rinkaku, while moving gracefully around the battlefield, she leads her sisters into bringing down those who would dare threaten the Grandmaster.

After hearing the news of a single Strider, who managed to not only enter Kazakh City but also defeat her two sisters Pei Pooh and Nang Pooh, Tong Pooh decides to take matter into her own hands and take down Hiryu herself, if needed. Tong Pooh and her sisters await him in the Underground Entrance near the sewers, encouraging Mikiel's armies to stand their ground and taunting Hiryu through the broadcast system as he makes his way to her.

After the battle begins, Tong Pooh comments that she's surprised one single Strider caused a lot of problems for her sisters. Eventually, it becomes clear she cannot hold him on her own, resulting in her sisters taking turns to help her. Unable to take him down still, they decide to join forces together and try overpower him by having number advantage but this proves futile and they are all defeated. Angry at her defeat, Tong lashes out at Hiryu by telling him to enjoy his false victory, reassuring him they will rise again. Honouring their previous dialogue in Strider 2, she tells him everything (including the whole world and Strider himself) belongs to her Lord. Once again, Hiryu replies that she will forever remain her servant and proceeds with his original mission.

Some time later, Xi Wang Mu confronts Hiryu and claims she will avenge her fallen students, which implies the three either died because of their wounds or were killed by Meio for her constant failures.

As the leader of the group, Tong Pooh is always in a serious mood and her determination helps motivate her two sisters into accomplishing the mission. A very confrontational individual, Tong Pooh brings out her ferocious temper and rage up front when in battle, drawing the strength to defeat any enemy from the anger that surges within her. She's unrelenting even in defeat, where she tends to lash out at Hiryu and insult or mock him.

She's the voice of the group as she's the only who has the courage to taunt Hiryu. She's also one of the most loyal followers of Grandmaster Meio, truly believing in his vision for the world and his right to rule as God as displayed in her lines against Hiryu.

Tong Pooh is a martial arts expert in an original form of Chinese Kenpo, having developed superhuman skills at the craft exemplified by how the strength of her kicks is enough to generate a large arc of plasma in her wake. The arc of plasma created by her kicks is of the same strength as the one created by Hiryu's weapon the plasma sword Cypher, said it can cut through anything with terrifying ease. Although an incredible dexterous fighter combining graceful moves with incredibly speed, her and her sisters' true strength lies at their teamwork, where their combined attacks are said to overcome any other fighting art. Tong Pooh is the most skilled of the three sisters, and her fighting skills are stated equal to those of Hiryu's.

In the 2014 remake, each sister specializes in a different weapon, with Tong Pooh being a master of the Chinese lín jiǎo dāo (麟角刀, lit. Unicorn's Horn), a saber-type sword. Although a weapon used in pairs, Tong Pooh makes use of a single sword to fight, performing spinning dives and rising slashes that leave arcs of plasma behind.

Tong Pooh, as she appears in the first two Strider games. 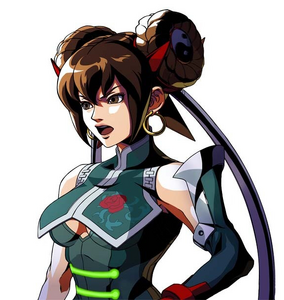 Tong Pooh, as she appears in the Strider 2014 remake. 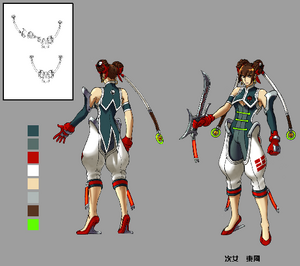 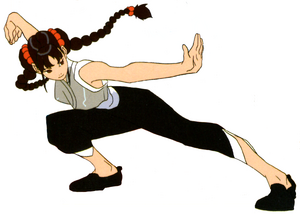 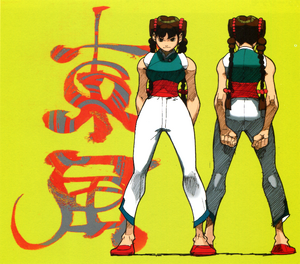 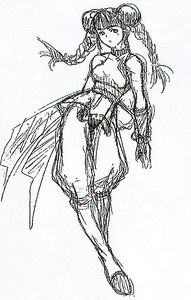