Tong Shau Ping is the "boss" and main antagonist of Hong Kong 97, a 1995 homebrew game made for the Super Famicom which became popular on the Internet due to being notoriously bad and utterly tasteless. His name is a spoof the late Chinese leader Deng Xiaoping's name.

According to the game's intro, "a herd of f***in' ugly reds" (China's communists) have started invading Hong Kong, and as a result "crime rate skyrockeded". As a countermeasure, Hong Kong sends Chin, said to be a relative of Bruce Lee, to slay all of the 1.2 billion Chinese communists (which would be the entire population of China in 1995). However, a secret Communist project brought the deceased Tong Shau Ping back to life to serve as the ultimate weapon.

Tong Shau Ping appears as the sole boss of the game. After the player takes down various enemies, he appears as a giant bleeding disembodied head which floats about and tries to crush Chin. Upon being defeated, he explodes into various mushroom clouds and the game loops. 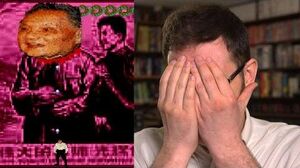