Villains Wiki
Register
Don't have an account?
Sign In
Advertisement
in: Mature, Traitor, The Walking Dead Villains,
and 18 more

Member of the Living

Survive the zombie apocalypse with his group (failed).

Tony is a survivor who had been traveling around for an unspecified amount of time since the apocalypse began with Dave, Randall, Sean, Nate, Jane, and around 30 other survivors. He served as a minor antagonist in Season 2 and the secondary antagonist of the episode "Nebraska". of The Walking Dead and an antagonist in the Facebook game, The Walking Dead Social Game.

He was portrayed by Aaron Munoz.

Tony and Dave arrive at Patton's Bar, occupied by Hershel, Glenn, and Rick, and comment on the fact that they are all still alive. They all begin drinking as soon as they introduce themselves. Rick mentions that Hershel lost 'people' today, referring to his wife and step-son who had been killed, as walkers, earlier on. The conversation, which is mainly between Rick and Dave, continues on to why each group is here and where they're heading, with Tony interjecting small bits of information every now and then. Tony, in the middle of the conversation, gets up, walks over to a corner and begins to urinate on the floor.

Dave, still questioning Rick, asks where they're staying as he noticed that their vehicle has no personal effects inside it. He guesses they're at a farm by Rick's reaction to his question. This leads Dave to ask what kind of resources they possess there. Tony laughs and asks if they have women at the farm, because he "hasn't had a piece of ass in weeks", implying he may want to rape them since it is later revealed by Randall that their group has done so before. When Rick refuses to talk anymore about the farm and won't even consider letting Tony and Dave's group join them, tension rises. Tony becomes quickly aggravated after Rick tells him to calm down, saying he'll kill the three of them. Dave diffuses the situation, then jumps over the bar, and pours himself another drink before placing his gun on the counter.

The conversation continues but Rick realizes they're trying to ambush him. When Dave reaches for his gun, Rick pulls out his revolver and shoots Dave in the head, then Tony three times: in the shoulder, stomach, and finally the head. 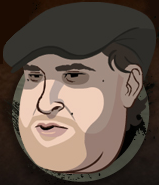