Leader of a separatist cult

Tony Alpert is a major antagonist in the 2015 video game Battlefield Hardline. He was a separatist quasi-cult leader, who leads a commune of like-minded individuals in the middle of the California desert, and the father of Dune Alpert. Tony Alpert’s stomped out the ideals of his hippie roots and replaced them with hate. He also was an employee of Sergeant Carl Stoddard. He only appears in Episode 8, "Sovereign Land", serving as the main antagonist of the episode overall.

He is voiced by Fred Tatasciore, who also voiced Poseidan in God of War, Mandarin in The Invincible Iron Man, Major Force in Batman: The Brave and the Bold, Witch Doctor in LEGO Hero Factory and CLU in TRON: Uprising and TRON: Evolution.

Tony and his daughter lived in the outskirts of the Mojave Desert in a hippie community, far away from the reach of law enforcement. Slowly he began conducting illegal activities and began to overthrow the community's leadership before finally getting rid of all who did not meet with his ideas. It was at this time that one community resident, Marcus Boone began having a serious relationship with Dune, angering Tony who proceeded to run Boomer out of town not long after finding out. He then forced Dune to wear a GPS tracker to know where she was at all times and monitored her calls in case Boomer made contact.

A major contributor to Tony's rise to power was his development of the cocaine drug "Hot Shot" which he had been selling for years across the entire country, allowing him to easily fund his small army with military grade equipment. It was only a matter of time before he started his war against the United States.

Once Nick Mendoza and his crew realized that they would need heavy duty safe-cracking equipment to break into the sake of Captain Julian Dawes, Boomer remembered that Tony had a robot that could perform such a feat in a relatively quick amount of time. He proceeded to contact Dune, asking if he could borrow the machine with the impression that he would not have to confront her father. Thanks to her father, who had monitored the call, Dune agreed to the deal, believing they would only capture Nick during the deal for his 250,000 dollar bounty and would allow Boomer to go free as he father promised.

After revealing his treachery to Nick and Boomer, Tony broke his promise to Dune and detained both of them, deeply upsetting his daughter who secretly handed Boomer a lockpick as she hugged him goodbye. Before being dragged away, Tony made it a point to Boomer that the ordeal wasn't about race, but instead the fact that he despised him and he was never really welcome in the community. The two are then sent to a missile silo that was decommissioned in the early 1990s to await Stoddard's arrival.

Due to his daughter's intervention, Nick and Boomer escape the compound and make it to the airstrip where Tony had been stockpiling weapons and vehicles. Furious that his property was being stolen and destroyed, Tony entered a Type 98 that he had acquired and proceeded to engage Nick in combat as he had also entered another one of Tony's tanks. Ultimately, Tony was unsuccessful in stopping Nick and was killed when his tank exploded, allowing Nick and Boomer to escape via airplane. 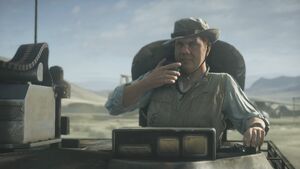 Alpert confronting Mendoza and Boone in his tank. 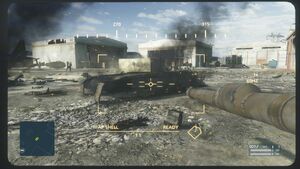