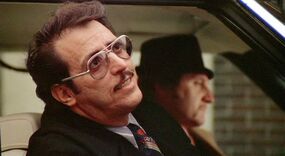 Tony Gazzo is a loan shark who appears in the first and second Rocky movies as a supporting character who employs Rocky. While he's ruthless he's shown to treat Rocky kindly.

He was portrayed by the late Joe Spinell.

Gazzo scolds Rocky when he refuses to break the fingers of a man who owes Gazzo money. Rocky argues it would be impractical as the man wouldn't be able to pay with broken fingers but Gazzo knows it was because of Rocky's morality and says Rocky should leave the thinking to him. Rocky suffered from his association with Gazzo when Mickey Goldmill banned Rocky from his gym. Despite the argument Gazzo shows kindness to Rocky by giving him some money to go treat Adrian with on their first date. He also gave him some extra money for his training and attended his first fight with Apollo Creed.

Gazzo was among the very few people who attended Rocky's and Adrian's wedding and suggested that Rocky should invest his money on condominiums. When Rocky has money problems, Gazzo offers him his job back. Rocky turns it down but unlike many criminals Gazzo takes no offense and agrees when Rocky requests his brother-in-law be allowed to take his place. He is later shown in the crowd, proudly cheering for Rocky in his fight against Apollo Creed.