Dealing cocaine.
Gaining power and money.
Smoking
Killing and manipulating his enemies with any violent or brutal way he can think of.
Snorting cocaine

Build a powerful drug empire of his own (succeeded).

Make more and more money and drugs in order to become a much more powerful drug lord than he is right now (succeeded temporarily).
Kill Alejandro Sosa as revenge for his betrayal (failed in the movie, succeeded in the video game version).

Antonio "Tony" Montana is the titular villainous main protagonist of the 1983 epic crime drama film Scarface, which is a loose remake of the 1932 film of the same name. Once a humble refugee from Cuba, Tony Montana eventually climbed the ranks of the criminal underworld to become one of the most powerful drug kingpins in Miami, and he himself is arguably one of the most iconic villains in all of film history.

In the film, he was portrayed by Al Pacino, who also played Michael Corleone in The Godfather trilogy, Big Boy in Dick Tracy, King Richard III in Looking for Richard, Lefty in Donnie Brasco, John Milton in The Devil's Advocate, Willy Bank in Ocean's Thirteen, David Fisk in Righteous Kill, Roy Cohn in Angels in America, Walter Burke in The Recruit, Wilhelm Zuchs in Hunters, and Jimmy Hoffa in The Irishman. In the video game adaptation, Scarface: The World is Yours and in Payday 2, he was voiced by André Sogliuzzo, who also voiced Juan Strickler in Grand Theft Auto Online and its update The Cayo Perico Heist.

Tony Montana was a former Cuban soldier, who was imprisoned in Cuba along with his friends Angel and Manny. However, he later fled and departed to Miami as a Cuban refugee in the Mariel Boatlift in 1980. Wanting to build a criminal career, he initially worked for drug lord Frank Lopez and fell in love with the latter's girlfriend Elvira Hancock. He then forged a relationship with cocaine kingpin Alejandro Sosa in Bolivia. When Frank discovered that Tony was getting out of hand in the business, their business relationship ends. Frank later sent hitmen to murder him but failed, after which Tony killed him in retaliation.

Next, Tony got all of Frank's illegal powers and started his own drug empire, married Elvira and started getting into business with Sosa. While on a mission in New York, Tony was commissioned to kill a senator with a bomb under his car. Upon knowing that the senator was accompanied by his wife and children, Tony aborted the mission, thus double-crossing Sosa (much to the latter's fury). Back in Miami, Tony went to the house of his best friend Manny and found him with his sister Gina Montana, not knowing that the two were married. Tony then crossed the Moral Event Horizon after shooting and then killing his faithful friend Manny because of the love he had for his sister, though he quickly regretted this action.

Later, Sosa sent a group of his own men to raid Tony's mansion and kill him. All of Tony's men were taken out, including his sister. After a furious gun battle with Sosa's men, despite being heavily injured and high on cocaine, he managed to kill many of Sosa's men, insulting and taunting them as he does so. He is ultimately shot in the back by Sosa's chief assassin, The Skull, with a double-barreled shotgun. Tony's corpse then fell into the fountain below, while the camera is in front of a statue reading "The World is Yours".

Scarface: The World Is Yours

The game begins in the film's final scene, with Tony's mansion being raided by Sosa's assassins. In a point of divergence from the film, Tony detects and kills the Skull. With the assistance of some of his surviving employees, Tony manages to escape. Sosa is then informed that Tony's mansion has been seized and his massive drug empire has been reduced to nothing. Hiding in a safe house located outside of Miami, Tony regrets the decisions he has made, chastises himself for Manny and Gina's deaths and never listening to the advice of others, and makes a vow to stop using cocaine. He then swears revenge on Sosa and promises to kill anyone who's in league with his nemesis.

Three months after the mansion shootout, Tony returns to Miami. Since everyone assumes he is dead, all of his assets have been seized and the districts of Miami that he used to dominate have been divided between other drug cartels. Tony's first action is to ask George Sheffield to become his lawyer again. Sheffield reluctantly agrees to this, but at a higher cost than before. Tony's influence throughout the city is gone and he has no choice but to accept it. Starting off again by selling cocaine to personal dealers, Tony manages to pay off the police to get his mansion back and travels to confront Gaspar Gomez at his penthouse. Despite Gomez not being there, Tony kills his head of security Ricardo and many of his men, steals a satellite phone for his personal use and hijacks an armored van carrying $50,000, enabling him to open a new bank account.

He reconnects with his original banker Jerry, who has since been promoted and although he feels unsafe, he has faith in Tony and agrees to work with him again. Tony then proceeds to take over Little Havana, claiming all of its businesses and turfs, severely weakening the Diaz Cartel. While taking a break at the Babylon Club, Tony is attacked by assassins sent by the Diaz Brothers. One assassin informs Tony that his mother has been slain. Tony murders the Diaz Brothers in retaliation and takes their territory. One of Sheffield's associates, Pablo (Wilmer Valderrama), lures Tony to Freedom Town with the promise of information on his missing ex-wife Elvira.

However, this meeting turns out to be an ambush, but Tony survives. After killing Pablo during a speedboat chase, he adds Sheffield to his hit-list. Tony takes Downtown from the Contreras cartel. He allies with the Sandman, a coke producer in a set of Caribbean islands south of Miami. He finds Nacho Contreras there as well, controlling a floating casino. After a chase through said boat, a wounded Nacho is eaten by a shark. After this, Tony slaughters what is left of the Contreras Cartel, seizing control of another tanker belonging to Nacho, which he used to smuggle drugs into Miami. Tony uses the new ship and various ex-Nacho workers to establish a supply line.

Tony slowly takes North Beach and South Beach for his own, fulfilling the various business missions and conquering the storehouses. He now controls Miami, however his supply lines are weak. The Sandman says he is going to war with the Colombians. Tony assists and drives the enemy's influence from the Islands. However, before he can celebrate, the Colombians take over Tranqilandia, a small island that is owned by the Sandman, and a crucial drugs base for the Montana Cartel. Tony takes it back, killing the Colombians, rescuing the Sandman's workers, and preventing the Colombians from seizing the cocaine there. Finally, everything is clear on the Islands. The Montana Cartel's power rises and Tony Montana becomes even wealthier and more powerful than ever before. Finally, he has gathered the strength to destroy Sosa, and heads to Bolivia.

Meanwhile, Sosa is hosting a sit-down in his exotic mansion. Sheffield and Gomez are there, discussing the problem of Montana. The man himself crashes the meeting. Tony moves through the grounds, killing Sosa's security detail before going to proceed in executing both Sheffield and Gomez. Tony then confronts Sosa in his living room and they discuss the situation from the movie where Tony refused to kill children. Shortly afterwards, Tony kills Sosa, fulfilling his revenge. On his way out, Tony finds one of Sosa's men still alive. The survivor begs for his life on the basis of his family and Tony offers him a job.

The game ends with that surviving henchman now serving as Tony's butler (who Tony refers to him as "Manny", in honor of his late friend and right-hand man, Manny Ray), Venus as his new wife and Tony's empire restored to full power and wealth. Tony finally has the "world" that he felt was coming to him, and with all competition eliminated, the Montana Cartel is the most powerful drug cartel in 1980's Miami. 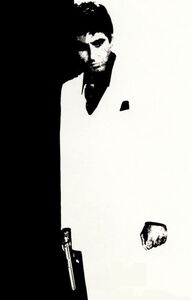 Tony on the film's poster. 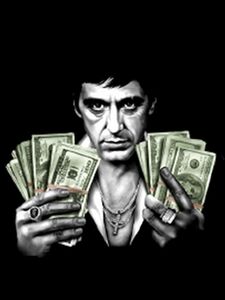 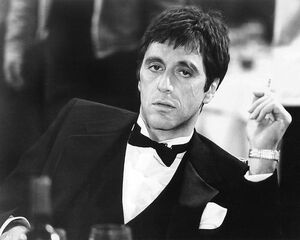 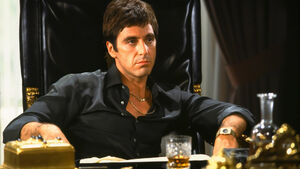 Tony as a powerful drug lord. 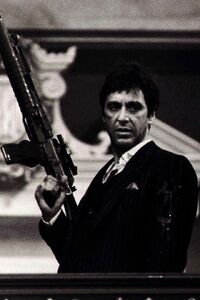 Tony during his last stand. 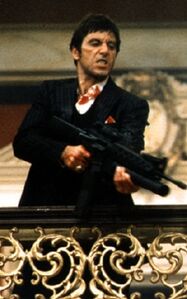 Tony during the mansion shootout. 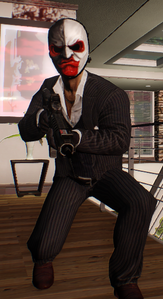 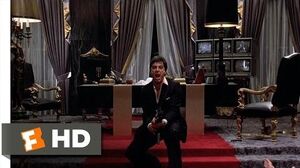